A slender gorge tucked in the ragged hills of Western Ghats in the Pune District of Maharashtra, Malshej Ghat Hill Station is home to a varied species of flora and fauna. The tranquil hill station is an abyss of absolution and rejuvenation to the chaotic minds and is one of the most frequented weekend gateways.

The enthralling treks on the neighborhood hills and witnessing the ebullient waterfalls followed by the thriving fauna and flora coupled with the panoramic landscape are some of the primal things to do when in Malshej. The famed hill-fort set away in the Ahmednagar District, Harishchadragad bears testimony to the ancient remnants of Micro-lithic man and date its origin back to the 6th Century during the rein of Kalachuri. Home to a sundry caves of mysticism devoted to Lord Vishnu, this medieval temple of Harishchadragad is one of the must visit places when in Malshej. The serene lake of Saptatirtha Pushkararni to the Eastern side of the temple which houses Lord Vishnu’s shrine on its bank is one of the places to see for the trekking facility it provides you with besides the massive cave of Kadareshwar housing the Shivlinga to the right side of the Harischadragad which is adorned by the intricate carvings and the four pillars encasing the idol.

Looking down upon the brooklet, Konkan Kada offers the paradisiacal views of the paradise like surroundings and the silhouette of the evening sky can be rightfully termed as the nature sightseeing spot. Best known as Taramanchi, the soaring peak of Taramati is the highest point with an elevated height of 1429 meters. Offering the stupendous view of the Naneghat range and the neighboring forts of Murbad, the Taramati peak is undoubtedly one of the tourism hotspot. The perfect example of vintage construction, the Nageshwar Temple’s primal attraction is the elongated sleeping posture of Lord Vishnu also termed as the Sheshshayi Vishnu is a must see. A phenomenal example of a single stone sculpted temple, Harishchnadradeshwar is beautifully encased with cryptic caves and time-worn water cisterns and is must visit for all devotees seeking bliss.

A primordial fortress resting in the district of Pune, Shivneri gained all the eminence for being the birthplace of the Maratha Founder- Chatrapati Shivaji. Visiting this time honored fortress comprising of a peaceful tomb, 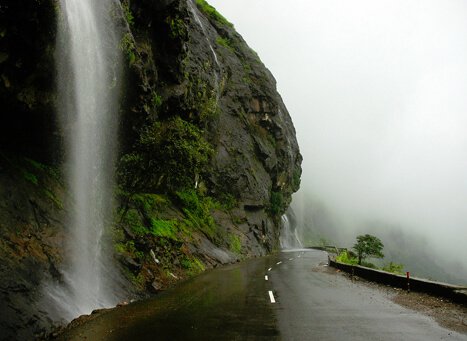 A hall for prayer and a mosque along with a tiny water pond at its epicenter named ‘Badami Talav’ -is one of the famous tourist activities besides the sacred pilgrimage to the Ashtavinayaka which trails back to the ancient legend and myth about being one of the eight temples of Ganesh in and around Maharashtra and witnessing some rare migratory birds like Pied Crusted, Alpine Swift, Flamingoes and sundry at Pimpalgaon Joga Dam.

The nearby hill-fort of Ajoba is rated as one of the favorite amongst the ones seeking for some thrill as it is best known for its trekking trail amidst the verdant forests and landscapes. A short tour at this hill during the winters is a must when in Malshej. Holidays at Malshej is indisputably one of the most sought after ideas.