Akola Fort along with Narnala and Akot forts is the major fortification of Akola district. Initially, the fort was built in the form of mud by Akol Singh during the reign of Aurangzeb. One day, Akol Singh saw a hare chasing a dog, considering it as a holy sign, a fort was built around the village. Later, the fort was constructed by using large granite stone blocks, line stones, mud blocks, clay bricks, woods, irons, and mortars. Along with strong, it's beautiful too. Its boundary is designed in lining art and looks exceptionally beautiful. On the gate of walls, known as Dahi Handa gate, tourists can find beautiful inscriptions that tell about the history of the fort. The fortress has many observation spots on its main walls.

In the year 1803, during the second Anglo-Maratha War, the fort became the camping ground of Arthur Wellesley. Later in 1870, Britons destroyed the fort and left it in ruins. On a visit to the Akola Fort complex, tourists can also visit the Rajeshwar Mandir, one of the oldest Shiva temple in the region. Also, there are many stone structures in the fort complex, which were built in later part of times by its consecutive occupant. 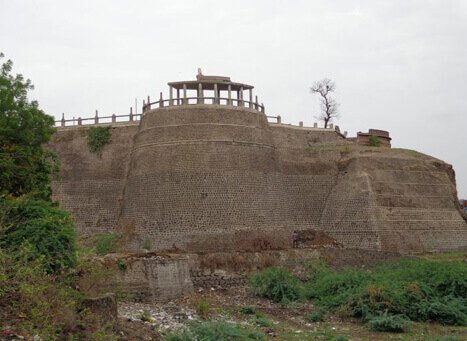