5 kilometer off the roads of the Aurangabad city stands the colossal beauty, and the most impressive monument of Aurangabad - Bibi Ka Maqbara, which bears a strong resemblance to the iconic Taj Mahal in Agra. It is mainly a mausoleum marking the burial ground of Aurangzeb's wife, Rabia-Durrani. Aurangzeb started constructing the Bibi Ka Maqbara, but it was his son Prince Azam Shah who completed its construction. One of the most perfectly proportioned and captivating Mughal mausoleums, the structure of Bibi Ka Maqbara, which brings together Persian and Mughal elements, was designed and erected by Ata-ullah, an architect, and Hanspat Rai, an engineer respectively. Ata-ullah was the son of Ustad Ahmad Lahauri, the main designer of the Taj Mahal.

Like Taj Mahal, Bibi Ka Maqbara too is located amidst a manicured garden with axial ponds, fountains, and water channels, and lined with broad pathways. The garden is further enclosed by high crenelated walls with fortress set at intervals, and open pavilions on three sides. The mausoleum is built in a Charbagh style on a raised platform to be reached by a fleet of stairs. Its distinctive interiors are also a class apart. To reach the main octagonal chamber containing the unadorned grave, one needs to descend the flight of stairs. The grave is enclosed in a perforated marble screens. The chamber above is a high square structure presenting identical facades on four sides.

Each corner of the mausoleum, even the cusps, and doorways are finely carved. Like Taj Mahal, it too uses white marbles and stucco but there's no pietra dura work that distinguishes Shah Jahan's creation. But it does has four disproportionately large minarets at the end of the large platform. The gardens around are a delight to explore, with the Deccan hills providing a scenic backdrop. To the west of the tomb is a small mosque with finely worked cusped arches and corner minarets. To the north is the Sunheri Mahal, which is easily noticeable for its goldwork.

History of the Bibi Ka Maqbara

Believed to be built between 1651 and 1661 C.E at a mere cost of Rs. 6,68,203-7, Bibi ka Maqbara is one of the finest examples of Mughal architecture. The mausoleum was built by Aurangzeb's son Azam Shah in the memory of his mother, Rabia. Somewhere like the other Mughal Era architecture, this one too has an exquisite architecture, which was built and designed by Ata-ullah, an architect, and Hanspat Rai, an engineer. Tavernier, a French gem merchant, and traveler, quoted it somewhere that to built the mausoleum the marble was brought from a mine near Jaipur. 100's of carts ladened with marble, drawn by at least 12 oxen, were seen by him during his journey from Surat to Golconda. Azam Shah. 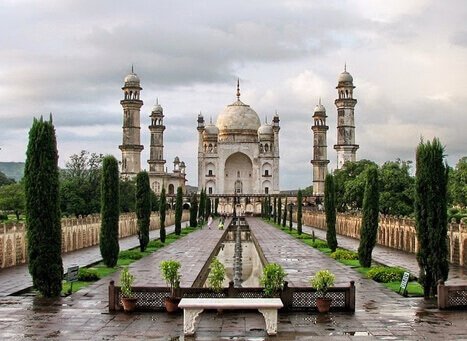 Things to Do & See in and around:

Around the Maqbara, tourists should visit Panchakki, which is barely 5-6 kilometers away. Other places that are worth visiting are Bhadkal Gate, Dr. Babasaheb Marathwada University, Mehmood Darwaza (Gate), P.E.S College or Engineering, Kham Nadi (Kham River) etc.

Tourists can take a city bus or hire a private taxi from anywhere in the Aurangabad to reach Bibi Ka Maqbara. Other possible means of transport that one can take is auto rickshaw that is fun, and even cheap.

One can visit Bibi Ka Maqbara throughout the year but a good time to visit will be winter as this is when the climate is salubrious and mild.

Points of Interest: Must Visit Places in Aurangabad