Despite the Portuguese influence that dominated Goa over the centuries, it is fascinating to see how such a large number of Hindu temples have survived here. Uprooted from place to place, the presiding deities were preserved and worshipped, at times, even in the houses of pujaris (priests), till they were ultimately ensconced in their present-day abodes. Some such old temples of Goa, which are noted for their natural beauty and simple architecture, have certain basic features, as in the days of yore, of being surrounded by betel nut trees, coconut groves and lakes of pure water. When you enter any of these temples you are welcomed by the sentinels-the great pillars of light.

There hangs many a tale about the origin of each of these temples, most of them revolving around the migration of the Saraswats from the banks of the legendary Saraswati river, on to the Gangetic plains, and then on to Gomantaka on the invitation of the sage Parasurama. 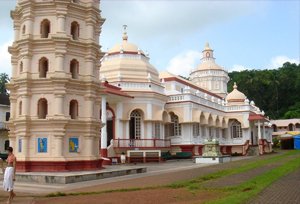 The Mangesh Linga is said to have been consecrated on the mountain of Mangireesh (Mongir) on the banks of river Bhagirathi by Lord Brahma himself, from where the Saraswat Brahmins brought it to Trihotrapuri in Bihar. They carried the linga on to Gomantaka and settled at Mathagrama, the present-day Madgoa, establishing their most sacred and ancient temple of Mangesh on the banks of the river Gomati or Zuari as it is called today. Lord Mangesh is worshipped here in the shape of a Shiva linga.

When, in the year 1560, the Portuguese started Christian conversions in Salsette taluka, the Saraswats of Vatsa Gotra felt insecure and shifted the Mangesh Linga from the original site at the Kushasthali to Priol in Atrunja Taluka, which at that time was ruled by the Hindu kings of Sonde. After remaining in the house of a temple priest for sometime, the Sri Mangesh deity was finally installed in its present site at Priol. 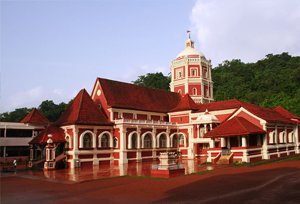 The Shanta Durga or Shanteri Temple is at Kapilpura or Kavele, also in Atrunja taluka. This deity is believed to have been carried by Loma Sharma of Kaushik Gotra when the Saraswats came to Goa from Trihotrapuri (present-day Trihut division) in the Mithila region of Bihar. A story in the Skandapurana speaks of how Lord Shiva, when defeated by his spouse Parvati in a game of dice, had left mount Kailash and gone to Gomanchala near Kushasthali for tapasya (penance). It is here that he heard the cries of the Saraswat Brahmin, Loma Sharma, caught by a crocodile in the river Aghanashini. When Shiva saved Loma Sharma, he prayed to the Lord to remain in Kushasthali. Similarly, when Parvati arrived looking for Shiva, she was also requested to stay at the nearby village of Keloshi (Kadalivana). The legend goes that sometime later, there was a battle between Shiva and Vishnu at mount Gomanchala, during which Shiva used the Pashupati weapon. Lord Brahma, the creator, then prayed to the supreme Goddess Adishakti to intervene. She, in turn, sent Parvati in the form of Shanta Durga or Shanteri, who took Vishnu by her right and Shiva by her left hand and pacified the two.

The deity Shanta Durga, therefore, is shown holding two serpents, one in each hand, representing Vishnu and Shiva. Shanteri is then said to have gone to Shankawali to kill the demons harassing the Brahmins there. It is for this good deed that she also earned the name of Vijaya. During the Portuguese inquisition, the trustees of the Shanta Durga temple decided to shift the idol to Atrunja taluka. A special feature at this temple is that Harijans are permitted to enter the sanctum sanctorum of this temple. 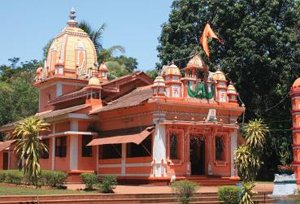 Atrunja taluka in Goa is now called Ponda. It is a land of valleys and mountains. An ideal abode for the gods amidst coconut and areca nut groves, Ponda has many Hindu temples, the Sri Ganapati Temple at Khandole village being one of the most prominent and oldest. As in the case of all Ganapati temples, legends and lore are aplenty here. The idol of Ganapati, who rides on a mouse, was shifted during the inquisition from Elle to Naveli in Dewadi island; then to Khandepar in Ponda; from Ponda to Narve in Dichole; and finally to Khandole village near Mashel town in Ponda taluka. 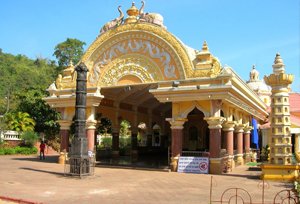 Mahalaxmi is the Goddess of power and strength. She is believed to be an incarnation of . Adishakti. -the supreme power and energy. The Shaktas, among the Saraswats, worshipped Adishakti in the form of the linga. Many accept her as Pallavi, their supporting deity, believing that this Goddess of tremendous strength and power was released when the devas and rakshasas were churning the ocean for amrita (nectar). On their arrival in Goa, the Saraswats, who had brought the Mahalaxmi idol with them, built a temple at Bhanda-Vatika or Bhandiwade village in the Atrunja taluka. Most of the Saraswats, however, were then living at Tiswadi and Sasasti talukas and had to cross a river and travel a long distance to worship the deity. So they established at Kolva, just 6 km from Madgaon, another Mahalaxmi temple, on the banks of the Arabian Sea.

In addition to the black granite stone idol, there was also an Utsava idol made of panchloha (five metals). Legend has it that during the inquisition in 1557, two non-Brahmins, Sapta and Phato, carried the Utsava idol in a box, while the granite idol was broken by the Portuguese. Sapta and Phato traveled by boat along the Arabian Sea, crossed the Rasai River and reached Talawal or Durbat in Atrunja, and handed over the idol to the Bhandiwade Mahalaxmi Temple. Sapta and Phato were rewarded by the Goddess who ordered the management to give them each two balls of rice after the mid-day mahapuja. This practice is carried out even today at a small hut constructed (near the temple) in memory of these two devotees. The Bhandiwade Mahalaxmi, which resembles the Mahalaxmi idol at Kolhapur in Maharashtra, has four arms. These arms hold a sickle, a club, a dagger, and a vessel containing prasad and flowers. The present temple was built in 1913 by a Parsi of Bombay (Mumbai) on the request of the Dempos of Panaji. 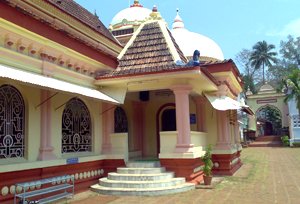 The Saraswats also established the Sri Nagesh Maharudra deity at Bhandiwade. Unlike the other deities, this one found a safe abode right from the start and did not have to be shifted from place to place. The temple, which faces west, has a beautiful tank in front, with a Nandi bull in black granite standing at its entrance. At some distance are also visible the smaller temples of Poorvachari, Betal and Raval Nath. The Palace of the Sunda King stands in the neighborhood.

A peculiar feature of the Saraswat temples of Goa is the priority given there to the local Christian devotees who are said to flock to these temples. Irrespective of having embraced Christianity, many of the present-day Christians still hold on to their pre-conversion surnames and still sponsor and support the deities of their Hindu brethren. It is a measure of how deep their roots run, despite all the Portuguese influence that had been thrust upon them. 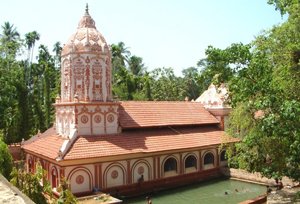 Shri Ananta Temple at Sovei Veram is a temple dedicated to Lord Vishnu, the second god of the Hindu Trinity, whose role is that of preservation, just as Brahma. s is of creation and Shiva. s is of dissolution. This is the only Ananta Temple in Goa and therefore of special interest. Surrounded on all sides by water and beautiful countryside, the aspect of the temple site inspires tranquility and peace. For village folk, the pilgrimage could be undertaken for the purpose of exorcising spells as the belief is that the Lord has the power to do so. 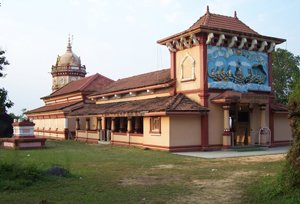 The Shri Chandreshwar Temple atop the Chandranath Hill dates from the pre-Christian era, when this region formed part of the Boja capital of Chandrapur today. s Chandor). The famous Shiva Linga is lit up by moonlight on the full moon night, and is said to become mystically bathed in water. Sri Chandreshwar or God of the Moon is so placed so to offer the visitor a wonderful view of the green valley below.

Devaki-Krishna Temple Like many of Goa. s temples, the Devaki-Krishna Temple at Marchel was moved here from two previous locations, to be safe from oppression. The beautiful and unusual image in black stone is of the baby Krishna on his mother, Devaki. s hip. Could the Baby Jesus and his Mother, Mary, represented in so many of the neighbouring churches here have given this temple its inspiration, or is it simply an astonishing coincidence of the overlapping of Western and Eastern traditions?

Other Temples Among other temples of Goa, mention must be made of the Brahma Temple in the village of Brahma Carambolim. Dating from 5th century AD, it is among the few temples dedicated to Brahma to be found anywhere. The Shri Bhagavati Temple in Pernem celebrates the Goddess Bhagavati Ashtabhuja, or eight-handed Devi or Goddess, one of the forms of Durga. Shri Datta Mandir at Sanquelim is celebrated for the miraculous cure for mental troubles which the deity, the Hindu Trinity of Brahma, Vishnu and Maheshwar, is said of offer. Shri Damodar Temple on the banks of the river Kushavati is a place of pilgrimage for Hindus and Christians alike. The waters of the river near the temple precincts are a cure for all ailments. Shri Damodar is known simply as Danubab by the faithful and he is, till today, the patron deity of Margao. The idyllic surroundings of Zambaulin make the visit quite memorable. Shri Gomanteshwar Temple at Brahmapuri, in old Goa, dates back to the Kadamba Kings who ruled Goa in the 5th century AD. Amongst the myriad temples found in Goa, we find a vast representation of the gods and goddesses of the Hindu pantheon which testifies to the catholicity of the people. s beliefs as well as their mutual tolerance. Indeed, Goa is well loved just for this rare quality which one feels imperceptibly on even a short visit. The welcome is genuine and holds back nothing. Live and let live is a potent vibration in the atmosphere. The more the avenues to the beyond the better. Little wonder that despotic tactics never lasted beyond a brief spell in Goa, while experimenters in new ways of living have found their haven here.

How to Reach Goa