Third largest by size after Hemis National Park in Jammu and Kashmir and the Desert National Park in Rajasthan, Namdapha National Park is an exhilarating place to spot wildlife. The park is predominantly known for housing four different feline species namely Tiger, Leopard, Snow Leopard and Clouded Leopard. No wonder with the perfect combination of wildlife, and mountains, there's nothing like it in India. At Namdapha National Park, there's no provision of jeep safari, however, to enjoy its rustic beauty one can opt for camping, trekking, elephant safari, and boat ride.

A heady mix of mountains and wildlife, Namdapha Tiger Reserve is a hotspot of biodiversity, and there's nothing like it in India. The park has all the reasons that make it a must visit - first, it is a part of the Arunachal Pradesh, which means that you will find less rush here. Second, it is a hotspot of biodiversity where one can see spectacular wildlife. Third, it is one and only wildlife reserve in India where you can see four big cat species, like leopard, tiger, clouded leopard and snow leopard. Apart, there are 96 mammal species are found here of which 29 species are listed in Schedule I of the Wildlife (Protection) Act, 1972

There are many flora species found in the park, most of its are rare, endangered or endemic species. Species such as Amentotaxus, Cephalotaxus, Larix, Pinus merkusii (Sumatran pine) and Abies delavayi (Delavay’s Fir) are found nowhere else in India. The rarest gem of flora found here is Blue Vanda, one of the rarest and endangered orchids, the Blue Vanda found here. Also, there's Mishimi Teeta (Copti teeta), which according to locals have medicinal properties that can cure all kinds of diseases.

It is a part of the Changlang district of Arunachal Pradesh and spread over 1985 sq km, which also makes it the largest protected areas in Eastern Himalaya. Further, make it more interesting is the fact that is one of the few national parks in India that allows camping within its boundaries.

Mentioned below is the list of the mammals, birds, and reptiles found the region 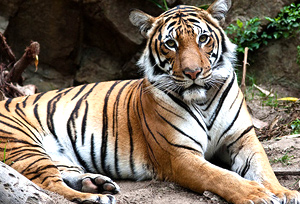 When it comes to Namdapha, the best places to stay will be campsites, government-run circuit houses, and inspection bungalows. In Deban, 26 kilometers from Miao, one can find some forest rest house, tourist lodge, tourist huts and a dormitory. For all those who love the idea of camping, there are few lands designated by forest departments like Gibbon’s Land (10th mile), Haldibari, Hornbill, Rani Jheel and Firmbase. For camping, one need prior permissions from the forest department is required and camping is usually organized and supervised by tour operators. Advance reservations can be made on the phone at the field director’s office, Namdapha National Park.

The best way to reach Namdapha National Park will be to first get down at Dibrugarh airport. From Dibrugarh, board Assam State Transport Corporation buses that ply daily to Miao via Tinsukia, Margherita, Ledo, Jagun and Kharsang. From Miao, drive for another 26 km stretch to Deban. To reach Deban, it would be advisable to take a taxi.

Where to Stay in Arunachal Pradesh?

Top Things to Do & See on Your Trip to Arunachal