Ladakh, the land of high passes, monasteries, deep blue lakes, brown mountains, challenging passes & quaint villages, in addition to its Buddhist culture & lifestyle. Go on an adventure trekking tour with our Ladakh trekking tour packages that are available at unbeatable prices & best suited for both amateur & advanced level trekkers. Unlimited adventure awaits you with adventure filled treks like the Chadar Trek where you cross the frozen Zanskar River, or the Stok Kangri Trek, which offers incredible views of Indus & Zanskar Valleys. Come, join us in a trekking tour to Ladakh at prices & facilities which you won’t find anywhere else.

Know More About Trekking in Ladakh 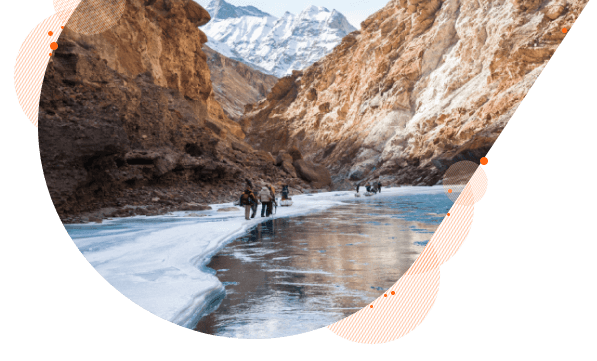 Trekking & Hiking in Ladakh is taking a walk in paradise, with the magnificence of nature surrounding you at all times. The trekking trails offer you grand views of the Karakoram Range, dotted with several mountain peaks like K2, Saser I, Saseer II, Saser III, Saser IV, Saser V & others.

The best time to go trekking in Ladakh is from January to September. Of course, the best time also depends on the particular trekking experience you are looking for.
The Chadar Trek, for example, is best enjoyed from mid January to mid February, while the best time for enjoying the Stok Kangri Trek is from mid July to mid September.

Q. What are the bestselling treks in Ladakh?

The best treks in Ladakh are:

Q.Which is the most difficult trek in Ladakh?

Some of the most difficult treks in Ladakh are:

Q. Which is the easiest trek in Ladakh?

Other Popular Adventure in Ladakh

Q.  Is any kind of permit required for trekking in Ladakh?

No permit or permission is required for trekking in Ladakh . However, for entering places like Pangong Tso, Nubra Valley, Khardung La, Tso Moriri, Turtuk, and Dah Hanu Villages an Inner Line Permit is required in Ladakh which is taken in the form of Environment Fee and Red Cross Fee.

Q. Are internet and phone connectivity easily available in Ladakh?

Yes, several places in Ladakh have access to cell networks and the internet. However, during the trek it is unlikely to find phone networks or internet services in Ladakh.

Q. Do we require trekking equipment during our trek in Ladakh?

. Yes, every trek in Ladakh requires trekking equipment to be carried. We arrange/provide the equipment on the request of the customers.

Q. . What is the best time for trekking in Ladakh?

The best time for trekking in Ladakh is between June and October when the weather is not very harsh. The end of December and January are an exception during which the famous Chadar/Frozen Lake Trek is done.

Q. Is trekking in Ladakh safe for solo trekkers?

Yes, solo trekking in Ladakh is quite safe. We create a safe ambiance for trekkers with our expert and well-trained team that is available round-the-clock ensuring safety.

Q. What is the level of fitness required for trekking in Ladakh?

The major concern in Ladakh is its high altitude, for which both, a good amount of rest before the trek and physical fitness play an important role.  Other than this for different difficulty level treks in Ladakh, the fitness requirement changes.

Q. Do we need any special clothing or gear for trekking in Ladakh?

Yes, considering high altitude, harsh climatic conditions, and difficulty level of treks, you would need to select a specific type of clothing as well as gears. The following are absolutely mandatory on a trek in the Indian Himalayas:

Q. What are the documents that I need for an Inner Line Permit?

Q. Do we need to carry some medicine during trekking in Ladakh?

Yes, even though we stay prepared with all the amenities required to keep you safe, we recommend that you carry all the medicines that you have been prescribed by your doctor. It is also wise to pack medicines for some common health issues like headache, stomach ache, fever, cold, cough, nausea, and AMS.

Q. How is the weather in Ladakh?

The weather in Ladakh is usually cold. While on a trek, it is likely that the temperature even in the summer season could drop even more significantly due to the elevation. However, the summer season, in general is quite pleasant in Ladakh, and the winter on the other hand, can get really chilly and harsh with regular snowfall. 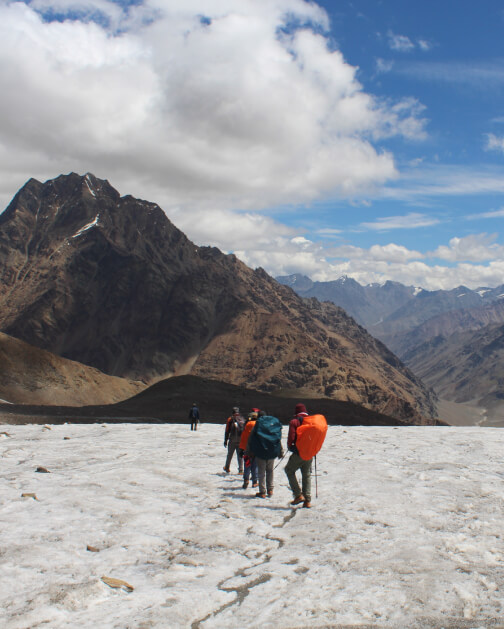 The most famous & difficult trek in Ladakh is the Chadar Trek taken during the winters, which involves walking on the frozen Zanskar River, which turns into a sheet of snow.

A trekking tour in Ladakh also offers you the wonderful opportunity of observing the unique culture & lifestyle of the Ladakhi people, which is strongly influenced by Buddhism and Tibetan culture. Listening to the Ladakhi language is a delight, as is enjoying some exotic cuisines like Chutagi, Skew, Paba & others. Some of the famous festivals of Ladakh like Hemis Festival & Sindhu Darshan & Losar, is marked by masked dances called Chham, which fascinates visitors a lot.

The beautiful thing about planning a trekking adventure holiday in Ladakh is that there are easy, moderate & difficult level treks, which can be taken by both amateur & advanced trekkers.

Amateur trekking enthusiasts can try out the Lamayuru to Alchi, Padum to Darcha, Ripchar Valley & Lamayuru to Darcha Trek where you can visit ancient Buddhist monasteries, lush meadows, villages & admire the natural beauty of Ladakh, which is breathtaking.

Advanced trekkers in Ladakh looking for the ultimate rush can go for the Jhunglam Hemis to Padum Trek, which involves a visit to Hemis Monastery & covers villages like Chuskurmo & Chokdo. The most challenging trek in Ladakh, however, is the Stok Kangri Trek, with an altitude of around 6,000 meters. Cherish the panoramic views of K2 & the Indus & Zanskar Valleys.

Admire the rich wildlife of Ladakh with the Snow Leopard Trek, which covers the beautiful valleys of Markha & Rumbak & gives you the opportunity of spotting various exotic animals like Snow Leopard, which is the main attraction in Ladakh & is known to perfectly camouflage itself with its surroundings, Ibex, Marmot, Tibetan Hare & Ladakhi Urial. What is unique about spotting these animals is that most of them are found exclusively in this part of India.

More About Trekking in Ladakh