Madhya Pradesh's serene hill station, which happens to be its only one, stands at an altitude of 1067 metres. It is a large plateau, ringed by the lofty hills of the Satpura range. The landscape is characterised by rugged hills, forests and deep ravines. Known as the verdant jewel of the hills, the all - pervading greenery of the region is what strikes the observer. Various hues of green greet the eye - tranquil emerald pools, the green shades that embrace the hills, and the thick, impenetrable forest cover that dominates the region.One of its main attractions, is the splendid view it offers at dusk, when the red sandstone scarp takes on the colour of the sky, in various shades of purple and violet, as the glorious sun sets on Pachmarhi.

Among the few exceptional hill resorts in India, is Pachmarhi in Madhya Pradesh. It is not on the usual beat of hill station buffs and therefore, not over-developed. Though considered a hill station, it does not offer the predictable mountain fare of awesome heights and spectacular scenery, for the Satpuras are low lying weathered hills. Pachmarhi' s appeal is low key. Peace, seclusion and a quiet unobtrusive beauty are its prime attractions.

Pachmarhi has a somewhat fateful history. The year that Rani of Jhansi and her Maratha soldiers declared Mutiny, a rather prosaic English officer who had a way with words, was sent to the dense Satpura jungles to quell a rebellion. After walking for 17 miles, Captain Forsyth of the Bengal Lancers found himself 2000 feet above the sea and a saucer-shaped plateau spread out before him. The vegetation had changed. The dry yellow grass and naked tree stems had given way to dense green undergrowth, moist banks of streams were covered with ferns and mosses and clear brooks refreshed the tired troops.

“The village of Puchmurree was still some miles distance, and we hurried along over the now almost level plateau to get shelter as soon as possible, as we had already walked almost seventeen miles and the sun was about to set,” wrote the captain in a book later. At this point in history, the population of tigers, leopards, bear and other carnivores was fairly significant in the dense jungles of Satpura, and we can presume the captain and his troops didn’t want to be supper to them. Even today, one may get an occasional sighting of the cats. Or certainly, the census records their existence.

The captain was obviously taking his notes. He mentions the genus of the trees he encountered a lot of jamun and mango amongst them (they still thrive) and, it must have been the homesickness, he gets annoyingly parochial. “Altogether, the aspect of the plateau was much more that of a fine English park than of any scene I had before come across in India,” he notes. Obviously, he hadn’t been privileged to visit Shimla yet.

After he went back to the plains and became deputy commissioner, Forsyth suggested that Pachmarhi be used as a sanatorium. And the Brit exodus began. A cantonment was created, churches and bungalows were built, a road network was laid, clubs came up and with them golf, horse racing, polo, tennis, snooker... A hill station was born.

This viewing point was the place from where Captain Forsyth discovered Pachmarhi and the view from here is breathtaking.

This spectecular fall is the source of drinking water for the people of Pachmarhi. There are bathing pools above the fall which are very popular, both with the locals as well as the tourists.

This is Pachmarhi’s most impressive ravine with a 300 feet high precipice.

A beautiful picnic spot which is ideal for children, as the pool is shallow and deepens only towards the base of the fall.

A beautiful picnic spot which is ideal for children, as the pool is shallow and deepens only towards the base of the fall.

Built in 1892 by the British, it has stained glass windows and a cemetry attached to it, with graves dating from 1859, World War I and II.

Regarded as the most beautiful small church in Madhya Pradesh, it was built in 1875 by the British. The stained glass panes on the walls and the rear of the alter were imported from Europe. The bell of the church is as old as the church itself, and can be heard from a long distance.

This pool was discovered by Irene Bose, wife of Justice Vivian Bose and is named after her.

Mahadeo hill has a shrine with an idol of Lord Shiva and an impressive Shivalinga which has been considered holy over many generations. On the east side is a cave shelter with paintings.

A sacred cave under loose boulders in which the Jambu Dwip stream has its source. The formation of rocks here resembles the matted locks of Lord Shiva, hence the name Jatashankar i.e. Shiva.

The highest point in the Satpura range, with a beautiful view of the surrounding ranges, it is a very popular spot for viewing the sunset. 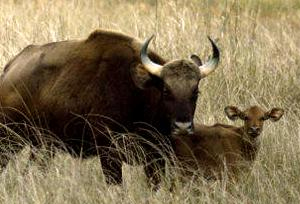 Set up in 1981, it covers an area of 524 sqkm. It has a dense forest of evergreen, sal, teak and bamboo. The park is home to the bison, tiger, leopard, bear, four-horned deer, blue bull and a large variety of birds...Read More

As said above, these cave shelters with their paintings provide a glimpse into the lifestyle, religious and social activities and beliefs. A must see for those with an inclination towards history.

How to Reach Pachmarhi?

The nearest airport is Bhopal (195 km), which is connected by regular flights to Delhi, Gwalior, Indore and Bombay.

Pipariya (47 km), on the Bombay–Howrah mainline via Allahabad, is the most convenient railhead. From Pipariya, there are frequent buses for Bhopal.

Pachmarhi is connected by regular bus services to Bhopal, Hoshangabad, Nagpur, Pipariya and Chindwara. M.P. Tourism as well private operators ply buses from Pachmarhi to the places listed above. Taxis can also be hired for this journey.