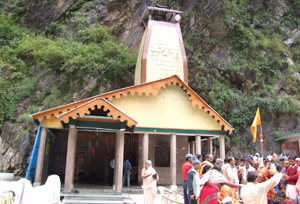 When River Yamuna descended from Champasar Glacier at 4221 m, it assumed the status of Goddess washing away the sins of mortals. And Yamunotri Temple located at 3,293 m is the place where pilgrims worship her. It is one of the Chardham of Uttarakhand, the other three being Kedarnath, Badrinath and Gangotri. Rituals at the temple are attended by lakhs of dedicated Hindus on their pious journey.

Constructed by Maharani Guleria of Jaipur and reconstructed by Maharana Pratap Shah of Tehri Garhwal at the left bank of the river, the temple houses the silver idol of Goddess Yamuna. On the day of Akshaya Tritiya it opens for pilgrims. And when it does, the torrent of devotees could tell about the extent of dedication to the river which is held divine.

The story behind the present site of temple dedicated to River Yamuna relates with Asit Muni who had ritualistically revered River Ganga and never broken the routine of bathing in its holy waters. However, continuing with this routine became harder with the old age, which when sensed by the Goddess Ganga, she presented herself just next to the hut of the sage in the form of Yamuna.

Yamunotri Temple: The Shrine of the River Goddess Yamuna is frequented from the day of Akshaya Tritiya which falls in the month of April or May depending on the Hindu calendar culminating on Kartik Amavasya (on the day of Diwali). Pilgrims trek 14 km to reach the shrine and participate in rituals to revere the goddess and feel blessed with the ‘Prasadam’ of rice and dal cooked as ‘khichri’ in the boiling water of the nearby hot spring. 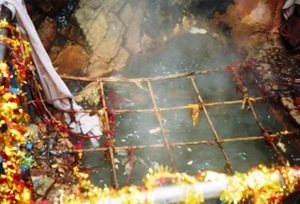 This kund is nearby the shrine of Yamunotri and hot gushing spring is used for bathing the deity of the temple as well as in preparation of the Prasadam- rice and potatoes in a muslin cloth. Pilgrim bathe in the spring water cooled to comfort.

Divya Shila: Meaning ‘Divine Rock’, the Shila is nearby the temple enshrining the river goddess. The specialty of the rock is in being a subject of worship even before the deity and tradition continues as it is since time unknown.

Janki Chatti: Known for many hot water springs that are believed to have curative powers, the place is only 5 km away from the temple. Pilgrims generally include it in their itinerary of pilgrimage to Yamunotri.

Hanuman chatty: This is the place where pilgrims can find many spots to lodge and eat on their trip to the holy yatra to Yamunotri. It is actually located as on the confluence of Rivers Yamuna and Ganga.

By Air : Jolly Grant Airport in Dehradoon is the nearest to fly to, from where taxis or buses could be hired for farther journey.

By Train : Dehradun, Rishikesh and Haridwar connect Yamunotri with rest of the places in India.

By Road : Route via Barkot and Dehradun is considered best to take while on road journey.