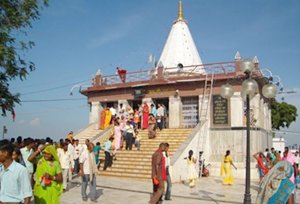 Dotted with numerous holy sites dedicated to almost all the gods, goddesses and deities of Hindu religion, India is famed for providing much-looked-for respite from troubled self and rushed life of individuals. Inspired to take a pilgrimage gratifying their need to come under the refuge of God, they turn into devotees in one such place called as Maihar in Madhya Pradesh.

Located in district of Satna, Maihar is a city associated with the Goddess Shakti, also known as Sharda Devi. On Trikut Hills, even 1063 steps to the hilltop to visit sculpture of Sharda Devi and Lord Narsingh do not stop pilgrims to consider the endurance and take the climb. Another mode of reaching the temple is ropeway. Developed in 2009, it facilitates the pilgrims short with vacation or restricted by physical ailments.

The history of the place 'Maihar' is about the warrior kings of Bundelkhand, which includes Rajputs and their famed descendents Alha and Udal who were staunch devotees of Sharda Mai. Alha is believed to have been gifted immortality by the Goddess for his devotion, proved by 12 years of worship followed by him sacrificing his head. His life was restored by the Goddess. Today a pond named after Alha situated behind the temple and downhill, referred to as 'Alha Pond' has become prime attraction of the people coming to the temple.

The legend that is supposed to be the reason for the existence of the temple starts with the Devi Sati and Lords Shiva who got married despite the objection of father of the Goddess - Daksha. Dejected by the marriage, Daksha planned a great Yagya to bring insult to Lord Shiva by not inviting Him. The act infuriated the Goddess who sacrificed herself in the holy fire. Upon getting the news of Her death, Lord Shiva brought His anger upon the world destroying anything and everything He met meanwhile carrying dead body of the Goddess on his back. To stop Him, Lord Vishnu cut the body into 52 pieces that fell at different parts of India where 52 Shakti Peethas (shrines) could now be found. Maihar is one of those 52 shrines where necklace (known as 'har' in Hindi) of the Goddess ('Mai'= mother) fell. Sharda is just another of Her many names.

By Air: Domestic Airport of Jabalpur (160 km) and Khajuraho (140 km) serve as the nearest points for flight landings. From here, the city is a small distance away, which could be covered either by train, bus or car.

By Rail: Maihar Railway station that forms the part of West Central Railways is served by many cities in Madhya Pradesh along with some others from states like Uttar Pradesh and others. However, Jabalpur Railway Station serves as major railhead bustling with crowd especially during Navratras.

By Road: Most of the cities are connected to Maihar with bus like Kanpur, Lucknow, Bhopal, Indore, Mumbai, etc.