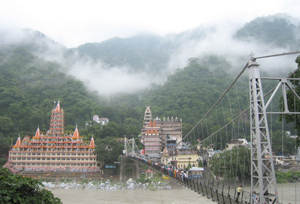 The path of enlightenment begins via religious scriptures leading to the places where God has supposed to have left foot prints of His divine presence. Considered sure shot to enlightening salvation devotees embark on holy journeys - Pilgrimage, eager to measure those footprints with theirs. One such place of eternal charm is in the state of Uttarakhand, festooned with mighty Himalayas, holy Ganges and other eloquent welcoming attributes of Mother Nature - Rishikesh.

Going by the etymology, the sound of the name of the place in itself acts like an ablution for souls. Pronounced as 'Hrishikesh', the word breaks into 'Hrishik' meaning senses and 'Ish' meaning Master, joining to give complete meaning as 'Master / Lord of Senses' which refers to Lord Vishnu. There are various legends rooted in mythologies are associated with the places, making traveling to it more fun and learning. And traveling to Rishikesh is also important because it is considered to be the beginning point for the Yatra of Char Dham of Uttarakhand - Badrinath, Kedarnath, Gangotri and Yamunotri.

The place has now earned a tacit reputation amongst the adventure maniacs as well who love to go to any extent to feel the rush in their blood. White Water River rafting in Ganges from various points makes for a favorite sport for them. Going to another level, they can try Bungee Jumping and some other sports that might give shock of a lifetime to those who are not into 'adventure' in any way.

And as if the fame was not enough, Rishikesh has also emerged as an international destination for Yoga, rightly assuming the title of 'World Capital of Yoga' and hence the thriving population of tourists from abroad. 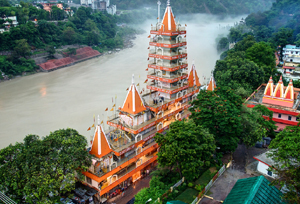 The Skanda Purana tells about the penance of Raibhya Rishi, who was then bestowed by the appearance of Lord Vishnu as 'Hrishikesh', giving the place its present name. Another story elucidates about the place being named as Agnee Tirth - a fierce fire once broke out in the forest where the place is located, resulting in the anger of Lord Shiva. The incident was followed by the penance of Lord Agni to pacify the Lord, making it 'Agnee Tirth'.

Pilgrims believe to escape to salvation by performing holy rituals in addition to austerities in this place. As a part of legendary Kedarkhand, the place is believed to be the one where Lord Rama did his penance for killing Ravana - a Brahmin, to wash away the sin of 'Brahmahatya'. At one point when the brothers Ram and Lakshman had to cross River Ganges, Lakshmana built a jute-rope bridge, where present day Lakshman Jhoola stands.

Lakshman Jhula: 450 ft of Iron Bridge over the Ganges now stands where at some point of time stood the jute rope bridge made by Laxman, younger brother of Lord Ram. Many temples and ashrams are dotted nearby on the either side of the banks, making it a popular tourist magnet.

Neelkanth Mahadev Mandir: The confluence of rivers Pankaja and Madhumati is tacitly celebrated by the presence of the temple with presiding deity Lord Shiva, at an altitude of 1330 m. Surrounded by the Brahmakoot, Vishnukoot and Manikoot hills, the sanctity of God elaborates the legend of Lord Shiva drinking 'Halahal' poison that came out of churning of celestial 'Ocean of Milk' and keeping it restricted to throat making it appear blue, hence the name 'Neelkanth' - 'Blue Throat'.

Bharat Mandir: A temple dedicated to Lord Vishnu has been erected in Rishikesh in 12th century by devout Hindu and Vedant scholar Adi Shankaracharya to resurrect the glory of Hinduism and accommodate the faith of its followers. Once destroyed by Tamur, it was reconstructed and recent excavation only highlights the ancient importance of the place. 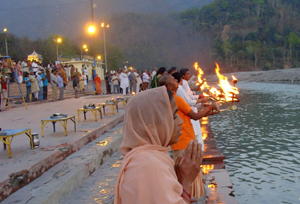 Lord Shiva is believed to have manifested himself as one of the 12 twelve Jyotirlinga by the name Trimbakeshwar, which means 'Three Eyed One' referring to the Lord with three eyes, i.e. Shiva. Placed on the banks of River Ganga, temple leaves devotees with a calm mind not possible everywhere.

Triveni Ghat: Maha Aarti is performed on this very bank of River Ganga where pilgrims can take holy bath. The cool air, the river, devotion of thousands of individuals and aarti make the ambience spiritually engaging, no matter what religion one belongs to.

Swarg Ashram: The 'Heavenly Abode' is known for being the very place where all the rishi and sages have prayed and performed penance and meditation to get a glimpse of God. Situated amidst Mother Nature, the place is a divine invitation in itself.

By Air: Flying to Jolly Grant Airport in Dehradun from New Delhi and Lucknow and taking road is the fastest way to reach Rishikesh.

By Train: Haridwar (24 km) is the nearest and convenient railway station connected very well by rest of the major cities of India.

By Road: People find it common to hire a car or taxi from New Delhi but the regular bus services from different towns and cities of India.