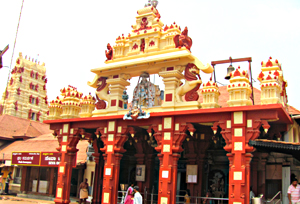 Whatever an individual does in his lifetime impacts his present as well as future and some philosophical and spiritual schools would tell about the next birth as well. The foundation of this philosophy is as old as the Hindu religion itself but Bhagavad Gita carves it in the grounds of history forever. Lord Krishna has uttered those divine words about 'Karma Yog' long back but the reverberations are still there, felt strongly in place like Udupi, Karnataka.

The name 'Udupi' might refer to a type of popular south Indian cuisine but that also takes its name from the place it has originated. The other popular names by which Udupi is reputed amongst its pilgrims are Rajata Peetha and Shivalli (also pronounced as Shivabelli). Temple festivals organized here keep the tourists and pilgrims coming here interested besides adding to their quotient of devotion and taste.

With the presence of several Ashrams and Matts (also pronounced as Muth), the Udupi, better known as 'Parashurama Shishti', has long served as a religious education centre. The prime among them is Asta Math, i.e. Eight Matts.

The history of the place is dominated by the presence of the Lord Krishna being present here in the idol form which is said to be as old as 13th century. The philosopher leader sage Madhvacharya propagated the idea of Dvaita (dualism) opposed to the Advaita (non-dualism) with respect to the Paramatman and the souls on the face of earth. He was the one credited with the installation of the idol present in the Krishna Temple of Udupi. 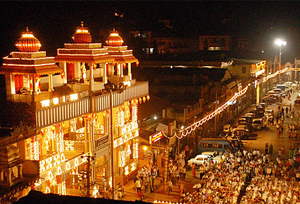 The story begins with the sage magically saving a ship near Malpe beach which was supposed to have sailed from Dwaraka, the city of Krishna. The captain of the ship gifted him the statue of Lord Krishna in gratitude along with that of Lord Balarama. The idol of Balarama was installed in a temple near the beach itself while that of Krishna was installed in the temple called as Krishna Matha. It is already known that the Vaishnavite sage followed Lord Krishna, an incarnation of Lord Vishnu who is taken as the foundation of the theory of Dvaita.

He was later responsible for establishing eight of his key followers in eight different maths located around the Krishna Mutt to take care of the administration of the main temple and further enhance the preaching of the Dvaita school of Hindu philosophy. These are referred to as 'Ashta Mathas'.

Another legend is associated with the name of the place; Udu meaning stars and pa meaning Lord join to form Udupi as Lord of Stars. As the story goes, King Daksha with 27 stars as daughters cursed Moon, the husband of the daughter to lose his Shine. When the scourge took effect, Moon prayed to Lord Shiva to return his shine and the Lord blessed him. It is after then the Lord manifested himself in the form of Lingam, seen in the temple of Chandramouleshwara where Moon did his penance.

The place was under British prior to which kings who had sworn their allegiance with Mysore kings ruled it.

Best time to visit: Round the year
Language: Kannada

Krishna Temple: A story goes tells the reason of why the deity of the temple faces window rather than the entrance as with the rest of the temples anywhere. It is believed that once a devout follower belonging to a different community than Brahmin was banned to enter in the premises and he chose a window o get a glimpse of the Lord. Happy with the devotion, since then God is on look of such devotees.

The town of Malpe: Being in this area of Udupi Suburb can be a splendid experience because of the legendary Malpe Beach, Daria-Bahadurgad Fort on the nearby island by the same name, Temples of Anantheshwara and Balarama - the revered elder brother of Lord Krishna and the other three islands, viz. Kari-Illada-Kallu, Daria-Gadara-Kalluthe and St. Mary's Island that surround Malpe.

Chandramouleshwara Temple: The place is associated with the legend about Daksha's Curse to Moon, Moon indulging in self-mortification and Lord Shiva blessing him. All these events in the religious history are marked by this very temple. Being Aajya (meaning 'Grandfather') to Krishna Temple at Udupi, all the rituals begin by paying a visit here.

By Air: Mangalore serves as the connecting airport separated by a distance of 54 km, from where taxis to Udupi can be taken.

By Train: Konkan Railways is credited for connecting Udupi to the rest of the country, as it lies in the route of Mangalore to Mumbai.

By Road: Mangalore serves as the bus station frequented for a travel to Udupi. Cars and taxis are always there for hire.