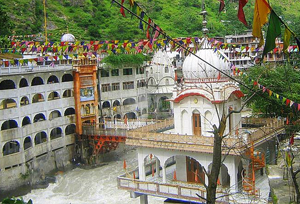 The sanctity of God welcomes everyone who needs Him. This belief finds devotees of various religious inclinations at places of different faiths. One of the best examples is presented by Manikaran, 41 Km away from the hill station of Kullu in Himachal Pradesh.

This place in Kullu district holds importance for both Hindus and Sikhs, for different beliefs but for same reason of finding peace. Located in the Parvati Valley jointly formed by the rivers Beas and Parvati, Manikaran is revered by the people of both Hindu and Sikh religions. Former relates the place with the resettlement done by the Lord Manu after the 'Great Flood' and latter is associated with the arrival of Guru Nanak founder of the Sikh religion. As a result, a Gurudwara and many temples are present here marking the charisma of these two religions felt and impact intellect deeply. 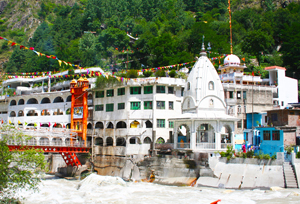 There are many myths and legends that surround Manukaran, both Hindu and Sikh. The place is believed to have taken name from Sanskrit word 'Mani' meaning precious gem stones as the following Hindu myth suggests -

When Lord Shiva and his wife Goddess Parvati came to this part of earth, the goddess lost her precious 'mani' or jewel. Shiva sent his army to find it but they couldn't which angered Shiva. This prompted Tandava - evoking the destructive forces of Nature. The serpent deity Sheshnaag then brought up the gemstone Parvati lost.

Another version of the story tells about Sheshnag deliberately taking the gemstone under earth, which angered Lord Shiva, forcing Sheshnaag to come spew hot water which still exists in the form of Hot Springs found in the area and with that the 'mani' Parvati though lost. The hot springs are known to be throwing jewels since then till the earthquake of 1905.

Sikh Legend is about Guru Nanak and his disciple Mardana having come to the place and feeling hungry, due to which Nanak asked him to set up 'Langar' - a kitchen for all. Mardana collected food material from the houses nearby and started making Roti. However as was no fire to cook it, Nanak asked him to remove a stone from where a hot water spring came up. When Mardana put rolled chapattis in the water as per the instruction of his Guru, it sank. Nanak then told his disciple to pray to God for the sunken chapattis to come up baked, so that donation of these could alleviate hungers of the needy. The prayers were answered, making the place pious for people of the Sikh religion.

Shri Guru Nanak Dev Ji Gurudwara: Also referred to as Manikaran Gurudwara, it is among the most popular of Sikh pilgrimage places in Kullu where people of different religious faith come in search of that 'something' which seems to always elude. It is said that Guru Nanak had given sermons in the area.

Lord Shiva Temple: Dedicated to the fierce 'Neelkanth', the temple here stands as a testimony to all the myths associated with the Siva and Parvati. The impact of earthquake of 1905 could be seen in the tilted temple, but the swarming devotees nonetheless cannot be deterred for paying a visit to the holy site.

Kulant Pith: The one which is considered holiest of all known to be existing is none other than in Manikaran at Vishnu Kund. The holy waters are well known for a life changing dip which is said to be relieving devotees of their anger and evil. The divine sage Narada is believed to have recommended the food cooked in the water for a transformation.

Lord Ramachandra Temple: Among many legends that are associated with Manikaran, one refers to Lord Rama, incarnation of Lord Vishnu, who said to have brought this temple from Ayodhya and installed it here. Others believe that the temple got built in 17th century by Raja Jagat Singh and he installed the idol of Lord Ram which was brought from Ayodhya, the birth place of the lord. The temple has beautifully sculptured idols of the divine couple, Ram and Sita, catching the fantasy of devotees.

Harinder Mountain: As usual with the states with nearness to Himalayas, the scenic picture where Nature is up and all to embrace humanity in warmest form despite the snowy presence could be seen here as well. The town being situated at the right bank of the River Parvati only enhances the appeal of the place.

By Air: Bhuntar Airport is the closest one which brings pilgrims to Kullu by flight. From here, road journey can be taken to reach Manikaran.

By Rail: The nearest railway station is located in Chandigarh from where buses are easily available to Kullu as well as Manikaran.

By Road: Many cities and towns connect Kullu from where reaching Manikaran is not a big issue.