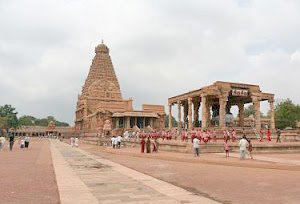 A dive in the historical depths of religious significances that is spread around the whole Indian landscape is as refreshing as the satisfaction of completing a heavy book of obscure religious texts. The two references might seem to confluence at some point, the holy places they point to all the time stand as a testimony to the past and promises of the future with the divine gratification of being on the right path. Thanjavur is no different in providing that very thing.

The resplendence of place located in Tamil Nadu could be easily imagined, ornamented with the three tributaries of River Kaveri (Pudhaaru, Vadavaaru and Vennaaru), Chola Temples with the characteristic architecture (now a UNESCO World Heritage Site), vast Paddy fields along with the laboring farmers, remnants of history left behind by Pandyas, Nayaks, Marathas and British and many such things. And when it comes to taking a souvenir, nothing better than Tanjore Painting can come as immediate suggestion in addition to handloom silk and cotton sarees.

Though considered an old city, Thanjavur has no clear history of the time before the rule of Chola dynasty, except for the alleged fact that the name belonged to a fierce demon once who was set free to salvation by Lord Vishnu in avatar of Neelamega Perumal, conceding to his last wish of giving the city his name.

3rd BC is believed to be the first time when a mention of place around Thanjavur was seen as a battleground of a Chola King against Cheras and Pandyas. After that, the place rose to fame again when Chola rulers came back to power in 9th century, defeating Mutharayars. It remained a capital of administration until Gangaikonda Cholapuram was taken as a capital in 11th century. During this time, Brihadeeswarar Temple was constructed, first of many architectural footprints of Chola dynasty. The era did not last long due to the continued invasion from Pandyans, Malik Kafur of Delhi Sultanate, Ma'bar Sultanate followed by Vijayanagara Empire, Nayak dynasty, Marathas and eventually British, who were responsible for turning the city into a centre of importance.

All these dynasties have their contributions which made Thanjavur a place distinguished when it comes to embarking on cultural, historical and religious tours.

Brihadeeswarar Temple: Also referred to as Big Temple, it is known for being the most brilliantly built temple in South India and one of the best in India. Dedicated to the Lord Shiva, the lingam can be glimpsed everywhere one takes his eyes to. The garden in the backyard adds to the interest in touring round the place. The temple, built by Raja Raja Chola, is the reason pilgrims choosing the destination for a holy journey to visit Lord and his Bull Nandi.

Shiva Ganga Garden: Located near the Tanjore Palace, the garden is beautifully maintained in Shiva Ganga Fort with different types of flowering as well as non-flowering plants; the fort built by Sevappa Nayak from 16th century. The sweet tasting water of the tank inside the fort is another feature for which tourists feel drawn to the place. 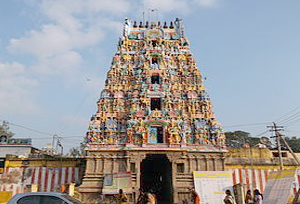 Guru Alangudi Temple: The place refers to the temple built for Chandra, the second most worshipped in the nine revered celestial bodies, first being Surya and rest of them being Mangal, Budh, Brihaspati, Shukra and Rahu and Ketu. Some 25 Km from Thanjavur, the place is more often than not is visited by the people suffering from astrological bad impacts of Moon.

Vellai Puliar Temple: As the name denotes and any tamil speaking individual would tell, the idol of the main deity Lord Ganesha is in white stone. Another remarkable feature of the temple is intricate carvings that set it as an architectural inspiration.

Tiruvannamalai Temple: Found among the best Chola architectural examples, the temple was built in 13th or 14th century but the idol of the deity is believed to be emerged on its own. Located in outskirts of the temple town, one never feels disappointed having visit masterpieces like these.

Schwartz Church: The place of Christian faith stands on the palace area as a symbol of tolerance and as a gesture of friendship towards Danish missionary Reverend Frederick Christian Schwartz by Chola king Serfoji in 18th century. When the reverend died in 1798, Maratha ruler Serfoji II donated a white marble on which is engraved the dying missionary blessing King surrounded by his men.

Alangudi Temple: The temple marks the mythological event of Shiva consuming the Alavisham - the cosmic Poison, giving the temple its name. Participating in as well as conducting Thursday Pooja here is considered auspicious. 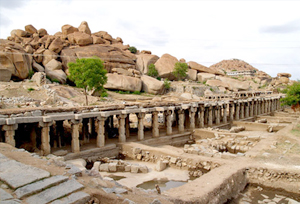 A result of architecture of both Nayaka and Marathas, the fort dates back to 16th century construction, most of which is in ruins but still of monumental historical worth. Some of the important attractions for tourists are located inside including Tanjore Palace, Sangeetha Mahal and Saraswathi Mahal Library.

By Air: Tiruchirappalli is the nearest possible place for the shortest time, which still is 60 Km away from Thanjavur.

By Train: The place is very well connected from most of the south Indian towns and cities of importance like Thrissur, Tripur, Rameswaram, Ernakulam, etc with Thanjavur Junction, but North Indian cities like Allahabad, Varanasi, etc are not left behind either.

By Road: Both private and state bus services ply on the various routes to connect places like Bangalore, Pondicherry, Mannargudi, etc. Cars and taxis could also be hires to tour the place.