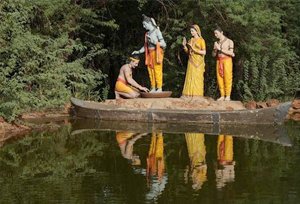 Whenever there is a mention of a life lived ideally, there would be Ram and Sita, the divine couple who set standard of how relationships should be dealt with in a family and among selves. And with that occurs the names of places their lives spanned in. One of those places was Panchavati in the fiery forests of Dandakaranya along the flowing Godavari River.

In present day, the name of the place holds much of a religious significance being associated with Lord Rama and his consort Sita. The reason due to which numerous individuals adorn garb of travelling pilgrim might actually not be comprehended precisely, but the place located in North of Nashik city in Maharashtra is a magnet in itself. Those who continue to draw strength from the stories of Ramayana and thus bearing the hardships of life as a warrior might never fail to pay a visit here at least for once in their life.

When Lord Rama and Lady Sita were asked to leave Ayodhya by beloved Step-Mother Kaikeyi under the influenced of Manthara her maid, the two left. However, compelled by the love for his elder brother, Lakshman also left with the couple on exile for 14 years. Panchavati was the place where the trio made their home while serving the exile, the word literally meaning 'garden of five banyan trees'. The trees could still be seen in the temple premises nearby Sita Gufaa. With Godavari flowing nearby, even the scary forests with roving animals became heavenly sanctity.

Best time to visit: Round the year

Kalaram Temple: Built by Sardar Odhekar of Peshwa in 1790, the temple is 70 ft high with beautifully sculptured idols of Lord Rama and Lady Sita, along with Lakshman in black stone, giving the temple its name. The temple is considered to be among the most artistic work in religion. 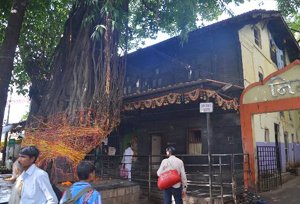 The cave where Sita was staying when Ravana (antagonist of Ramayana) came to kidnap her as a revenge of Lakshman cutting nose of his sister Surpanakha, is located on the western door of the Kalaram temple. 'Lakshman Rekha' drawn by Lakshman for protection of Sita is located some one kilometer from the caves.

River Banks of Godavari: The place is spot for the Kumbh Mela bathing and gets full of pilgrims from every corner of world during the occasion.

By Air: Ozar's Airport is used to fly to Nashik and then a car could be hired to Panchavati

By Rail: After reaching Nashik Road Railway Station, passengers can take local transportation to North of Nashik, where now-heavily-populated Panchavati is located.

By Road: Nashik is connected to cities like Delhi, Bangalore, Nagpur, Mumbai, etc, thus easily reached by buses, cars and taxis. Further transportation to Panchavati might be needed in case of taking buses to reach to the city.