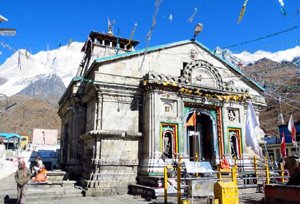 Among the glorious mountain peaks that are covered with nothing but snowstorm, lies one of the holiest pilgrim sites of northern India -"Kedarnath". Famous for the ancient shrine devoted to Lord Shiva, it tenders an unflustered ambience with its colorful rhododendron woods, snow covered mountains and splendid sights of nature. This sacred city is visited by thousands of tourists from all over to seek the blessing of the lord and scout the undulating scenery of this region at an elevation of 11,755 ft above sea level. Almost all the appeals nestled in higher altitude render every bystander a fascinating and enchanting feeling. An amalgamation of devoutness and adventure is what makes it peerless and unique.

The legend has it that after the battle of Kurukshetra, Pandavas of Mahabharata's went on a journey to Varanasi to seek blessings from the Lord as they were guilty of killing their own kith and kin. However, Lord Shiva avoided meeting them, thus hiding himself in Guptakashi. When Pandavas found him, Lord Shiva decided to take the form of buffalo so that they couldn't recognize him. Seeing them coming closer Lord made a decision to become invisible by going underground. While doing that one of the five Pandavas, Bhima made a great effort in stopping him by holding on to the legs and tail of the bull. Unfortunately, the Lord dived and evaporated at that place leaving behind his hump which is now worshipped at Kedarnath Temple.

Kedarnath Temple: Deemed to be erected by a great philosopher Adi Shankaracharya during the 8th century, Kedarnath Temple is among the few shrines in northern India that requires an arduous trek to take the blessings of the Lord Shiva. The best time to visit the temple is from May to mid November.

Gauri Kund: Located on the way to Kedarnath temple at an elevation of 1982 m, Gauri Kund is a religious place and has an ancient shrine devoted to Goddess Parvati. It is believed that Parvati had done penance here to win Lord Shiva's love. 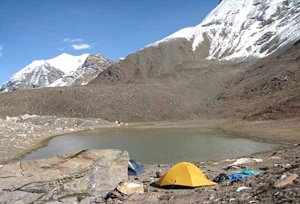 One of the main attractions of Kedarnath among devotees and trekkers, Vasuki Tal is situated at a distance of 5 miles from Kedarnath. A lake at an elevation of 4135 m amid snow clad mountains is an amazing view. At this place, one can also catch a charming sight of Chaukhamba Peaks.

Sonprayag: Situated at a height of 1829 m above sea level, Sonprayag magnetizes the attention of the travelers while on their tour to kedarnath. The place is bestowed with majestic views of gushing rivers and snow covered mountains making this place more beautiful and fascinating. Apart from this, it is a much honored sacred place. The people have a faith that taking a dip in the rivers could get them rid of all their sins.

Chopta: An appealing trek through the beautiful wonders of nature, Chopta is gifted with views of the imposing hills and lush meadows at a height of 2900 m. It is a perfect spot for adventure buffs as it tenders wonderful opportunities of trekking.

By Air: Jolly Grant Airport is the closest airport to make it to Kedarnath situated at a distance of 150 miles. Taxis are available from airport to Gauri Kund.

By Rail: The nearest railhead is positioned at Rishikesh, about 130 miles from Kedarnath. The other closest ones are Haridwar, Kathgodam and Kotdwara.

By Road: One can easily reach Gaurikund by roads from the main destinations of Uttarakhand and many other famous parts of India. One has to get on a trek of 8 miles from Gaurikund that leads to Kedarnath Temple. Regular bus and taxis services are available from the major destinations like Chamoli Haridwar, Rishikesh, Tehri, Srinagar and Dehradun.