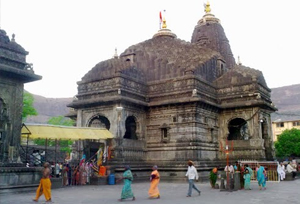 Every time a sin is committed, there must be penance, one way or the other. While laying down rules of a mortal life, Gods ensured that pilgrimage become a way to ease the burden of sins on conscience. Pilgrims repent their wrongdoing even though not consciously being aware of them all the while until they reach under the refuge of the deity they worship. Trimbakeshwar temple of Trimbak, one of the 12 Jyotirlingas, is among the destinations where devotees of Lord Shiva can rest shedding their burden of guilt on God's feet.

The renowned city of Nashik in Maharashtra is said to be one of the place where Gods came together to make it worshiped as a sacred destination and this is where the story of Ganga coming down to earth in the form of Godavari is being told followed by the reason of manifestation of Lord Trimbakeshwar, embodying the holy triad- Brahma Vishnu and Mahesh.

Godavari River also referred to as River Gautami after the name of the Sage Gautama is one of the four rivers which are believed to be bestowed with the divine nectar, Amrit and thus its banks become the hosting ground for Kumbha Mela. Its presence adds to the charm of the holy town just as the simple natural beauty characteristic of hills and mountains of Brahmagiri and Gangadwar that surround it. Being a part of the place and the temple of artistic finesse carved in black stone indeed feels like washing away all the sins. 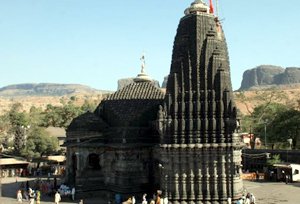 The temple is the prime reason of the popularity of the place which is now generally referred by the same name as the temple. The Peshwas are credited with the construction of the Shiva temple that now steals the show. It is also said that the crown over the Linga made of gold and precious jewels was installed by Pandavas of Mahabharata. The temple of the Lord is also associated with the historical time when Neelmani or Nassak Diamond which was a part of Lord Shiva's idol was seized by the British and taken away.

Different mythologies point to one common incident of an extremely long famine, effects of which could not affect Sage Gautama, one of the Saptrishi and his wife because of his high merits. From here on two versions split. First version tells about increasing merits of the sage because he chose to serve food selflessly to the other sages which made Indra worried and thus he ordered for the famine to be ended. However, the sage continued to earn merits by asking the rishis to eat at his place, a request that was granted. When Jaya, a friend of Goddess Parvati got killed by a sharp grass for grazing the field in the form of a frail cow by the Sage Gautama, he had to perform penance of his sin of 'Gau Hatya' - killing of a Cow to bring Goddess Ganga from the deadlocks of Lord Shiva down to earth to wash away his sin. Lord Shiva after becoming happy with the penance rewarded what was asked from him for greater good. And then Lord manifested here on the banks of River Gautami to take care of the place forever.

The other version is about Lord Ganesha becoming the cow on the request of the rishis and their wives jealous of the merits of Sage Gautama and dying forcing the sage to please Lord Shiva with his penance and bring Ganga to earth. Delighted Lord Shiva appeared with all the gods and goddesses and said to have remained here since then in the form of Jyotirlinga of Trimbakeshwar, hence the story of 33 Crore Gods and Goddesses staying here making it as popular as a pilgrimage place could get.

There is a small mythological story behind the pond Kushavarta. When Ganges appeared on earth by the power of penance of Muni Gautama, she was sulking on getting parted with Lord Shiva which made here appear in compulsion and disappear in anger at one or the other places like Ganga Sagar Tirth, Varaha Tirth, etc. Muni then bound her by Kusha (a grass) to bathe in her waters to purify himself. 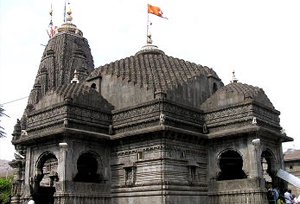 Trimbakeshwar Jyotirlinga Temple: Unique among all the Shiva temple and Jyotirlingas in its appearance, the temple has a hole in place of Lingam inside which three 'pindis' (stone representing Gods) could be seen, one for each of the Holy Trinity- Creator Brahma, Operator Vishnu and Destroyer Shiva. Carved in black stone, temple unconsciously inspires devotion.

Kushavarta: The place is among some of the picturesque regions near Nashik decorated with greenery on mountains due to river. The temple of Kedareshwar is another interest that people come for while in Trimbak. The nearby destinations of Kanchan and Kanakhala Tirth are believed to be making the bones of the dead disappear.

Gorakhnath Gufa: The place is believed to be the one where Guru Gorakhnath meditates for Ganges to appear. If other versions of the stories are to be believed, Rishi Gautama was the person to meditate tough, enough to please Lord Shiva. The Shrine to Goddess Ganga is located here itself, in Brahmagiri Hills.

By Air: The nearest airport is located in Mumbai (200 Km) from regular taxi services ply to Trimbakeshwar.

By Train: Just 28 Km away is Nashik Railway station that connects the holy city from rest of the country through major cities and town.

By Road: Bus service from Nagpur, Mumbai, Pune etc are available, else travelers are free to opt to hire car or taxi according to their preference.