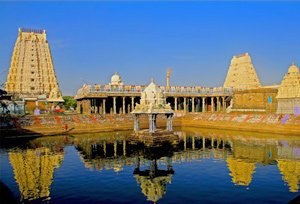 Kanchipuram, amongst the seven sacred cities of India, is a paradise of beautiful temples nestled on the banks of the River Vedavathi in the Indian state of Tamil Nadu. With a great number of shrines, it is no surprise that the town is an illustrious pilgrimage site for Hindu devotees. In addition to these, the place also boasts of several famous mosques and churches. It brings so much more to make the visitors holiday experience in Kanchipuram memorable and remarkable. From historic shrines, striking silk sarees, picturesque old buildings, charming landscape, lively culture to exotic cuisines, all of them can be scouted in one place and that is Kanchipuram.

History says that Kanchipuram is the oldest city in the entire south India. Many records by Kalidas bring Kanchipuram into light, the most popular one among the others in the medieval periods. The city was under the rule of three great dynasties - Pallavas, Cholas and Vijaynagar. It was first taken over by the Pallavas who ruled the place between 6th century and 9th century. During the rule of Pallavas, Hsuan Tsang (a great Chinese traveler) paid a visit to the city and praised them for erecting the shrine contributing in city's fame.

According to the legends, Buddha had also visited this place. After Pallavas, the city was ruled by Chola Kings between 10th and 13th century. Later the Vijayanagar Kings ruled it between 14th and 17th century during the period they constructed the beautiful Ekambareswarar Temple. 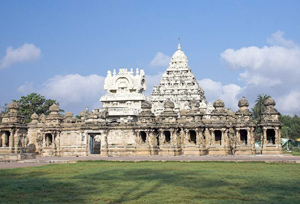 A renowned shrine of Kanchipuram, Sri Kailasanathar Temple was constructed during the 7th century by the Pallavas kings. The temple is dedicated to Lord Shiva and thousands of devotees throng here from different locations of the world during the fair of Shivaratri.

Ekambareshwar Temple: Devoted to Lord Shiva, Ekambareshwar Temple is considered to be the largest sacred shrine in the Kanchipuram city. As per religious belief, the picture of Lord Ekambaranathar is painted by the Goddess Parvathi who had done severe penance to achieve him. While heading out of the temple, one can also witness 3500 years old mango tree.

Kanchi Kamakshi Temple: Kanchi Kamakshi Temple is a part of the triad including Madurai Meenakshi, and Kasi Visalakshi shrines in the heart of Kanchipuram. It is famous for its beautiful sculptures painted in vibrant colors drawing the attention of the folks visiting the temple.

Varadaraja Temple: Constructed by Vijayanagar kings in the 10th century, Varadaraja Temple is one of the must visit attractions in the city. The temple is located on the top of the Hastigiri Hill and is devoted to Lord Vishnu. The sacred place remains packed with tons of pilgrims during the festival of Garudothsavam which is taken place in the months of May and June.

Kamakshi Amman Temple: Another famous shrine is Kamakshi Amman devoted to the deity Parvathi. It is deemed to have been erected ahead of 7th century by the Pallavas Kings, but subsequently reconstructed in the 14th century by the Chola Kings. There is a Shankaracharya shrine in this temple who is one of the supreme saints celebrated for constructing a golden tower.

By Rail: Kanchipuram is connected to Madurai, Pondicherry, Chennai, Trichy, Bangalore, Katpadi and many others through rail networks.

By Road: Since the roads leading to Kanchipuram are excellent, many travelers prefer to reach there by road. Regular bus services are also available from Chennai and many others cities situated in and nearby Tamil Nadu.