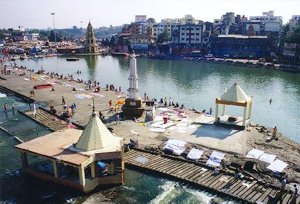 Maharashtra is among the biggest states of India, where different people can satiate different travel urgings and when these are purely religious in Nature, nothing except Nashik can fulfill the wish of peace and piety in pilgrims.

River Godavari forms the bank on which this one of the most populated cities of India is located. The name of the place gives a part of it to the nomenclature of Nassak Diamond which was adorned by the idol of Lord Shiva as 'Neel Mani' in Trimbakeshwar Temple some 24 Km from Nashik, until British seized the jewel. Now, many popular Hindu pilgrimage sites attract religious people from everywhere.

Nashik is also known as one of the places where the holy epic Ramayana was plotted. Moreover, the city happens to be among the four holy destinations where the Kumbh Mela is organized, others being Allahabad, Ujjain and Haridwar.

The history of the place is mythological rooted in Ramayana with places. Nashik allegedly got its name from the act of cutting nose 'nasika' of Surpanakha, sister of Ravana by Lakshman, the younger brother of Lord Rama. There is Panchavati, the place with five Banyan trees which was made home by Lord Rama during his 14 years of exile. The caves where Lady Sita, consort of Lord Rama stayed before getting abducted by Demon King Ravana are still here.

The other aspect for which pilgrims come rushing to the place is the Kumbh Mela. River Godavari (a tributary of River Ganges) is believed to have received few droplets of nectar of immortality - Amrit while Lord Vishnu was carrying away the pitcher 'Kumbh' from demons 'Asuras' in the form of an enchantress 'Mohini'.

The geo-political history has its connections with Peshwas and British who controlled administration of the place hence the possessions as well, before India won its Independence. 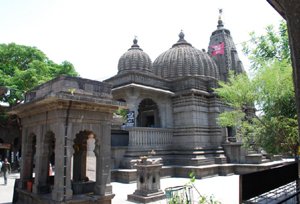 Dedicated to Lord Rama, the temple was built in 18th century by Sardar Odhekar of Peshwa. The temple is known for its structural appeal, not to mention the gold plated copper dome and artistically sculptured idols. The black stone with which the idols of the deities of 70 ft high temple, is build is another attractive feature, that is why the name 'Kala Ram' Temple. All the festival associated with Lord Rama and events depicted in Holy Ramayana come alive here when celebrated.

Sita Gufaa, the place from where it Lady Sita was taken away by Ravana through a pretense is located at the western side of the door. The Legendary five banyan trees of Panchavati are also located in the same premises.

Ganga Ghat: Running water is symbolic of good luck since time immemorial. This holds true for Nashik as well where River Ganga, Ghat of which is dotted with numerous temples dedicated to different Hindu deities. The chants by people deep in prayers and introspection invoke devotion as the simplest form of attraction as do the floating lights lit by them in twilight.

Kapileswara Temple: Among many temples of Lord Shiva in Maharashtra, this one is considered to be among the oldest in Nashik, beauty of which is blended with the presence of Nature in River Godavari. Idol of Nandi - the Bull of the Lord faces the temple in a pose of overlooking the abode of the God. The festivals of Maha Shivratri and Shravani Somvar are celebrated here with great zeal, emphasizing the architectural marvel this temple is symbolic of.

Ramkund: With the belief that Lord Rama and his consort Sita had bathed here, hundreds of pilgrims are drawn to the place to get a holy dip in the waters of River Godavari. To rest the souls of dead, people often are seen to be scattering the ashes left after cremation in this place. 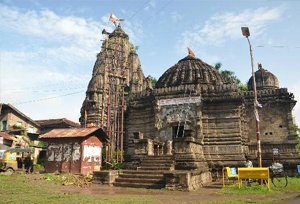 Dedicated to Lord Vishnu, the temple is located on the banks of River Godavari. The idol of the deity is standing with Goddesses Lakshmi and Saraswati. Also, the walls of holy place are carved with the impression of Hanuman, Indra and Narayana. The architecture of the temple exhibiting the porches, domes and arches becomes more exquisite with the fact that the rays of rising sun falls on the idol on 21 March.

Naroshankara Temple: Constructed in 1747 in typical Mayan architectural style by Naroshankara Rajebahadur, this is another fine example of dedication to Lord Shiva. This is among those fine places where Hinduism as a way of life could be studied in the works of art present.

Dudhsagar Falls - it should be not here: The waterfall is well known picnic spot which refreshes people and relieve their mind from their mundane life. The monsoons enhance the beauty of the cataract when it comes to full glory and volume.

By Air: Ozar's Airport of Nashik is located some 24 Km away from the city is the nearest place to fly to get into the city.

By Rail: Nashik Road Railway Station is the main de-boarding point for passengers coming to Nashik. The station though 10 Km far from the city is served by regular public and private transportation. Daily trains from Mumbai and Pune connects Nashik to the rest of the India, however there are some others places as well, connected to this city.

By Road: Various National Highways connect Nashik to places like Delhi, Bangalore, Nagpur, Mumbai, etc. Hiring a taxi, renting a car or reserving a seat in bus can be used to come to the city.