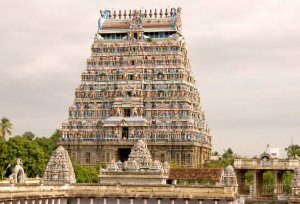 Positioned amidst architectural magnificence and temples of bygone era, Chidambaram is a beautiful town of Tamil Nadu. Its mores, values and pious rituals are potted with artistic exquisiteness and charm. It is festooned with a wide spectrum of beautiful ancient temples, glittering backwaters, picturesque vistas and verdant mountains, setting it apart from the rest of the country.

An abode of Nataraja temple, the place welcomes tons of devotees throughout the year from all over the globe. The hub is main sacred destination for Shaivites (Followers of Shiva) and Vaishnavites (followers of Vishnu). It is said that carrying out dances in front of the Nataraja is bliss. Tons of folk dance performers get allured to Chidambaram during the festival of Natyanjali. Apart from religious importance, the place offers its visitors an excellent opportunity of sightseeing and shopping in and around the city.

The fable of Chidambaram starts with Lord Shiva walking into the Thillai Vanam indicating a variety of mangrove trees which can still be found in the Pichavaram wetlands in immediacy to Chidambaram. The two most renowned Rishis Vyaghrapada and Patanjali were paid a respect here in olden period. And the faith they had in the superiority of magic that deity could be controlled by magical words or rituals was achieved. On the other side Lord Shiva got delighted and it is said that during the festival of Thai Poosam, Lord makes known himself by performing cosmic dance. Subsequently, a dance hall was erected during 1251-1272 AD by Jatavarman Sundara Pandya. 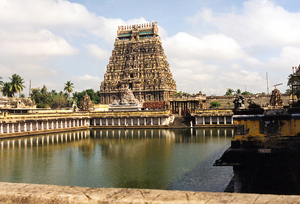 One of the most significant temples in the holy town of Chidambaram, Nataraja Temple is dedicated to Lord Shiva who is worshipped in the form of Nataraja. During the empire of Pallava and Chola kings, the temple had gone through scores of renovations. Famous for its huge walls, artistic carvings and appealing inscriptions, it is amongst the few temples where Lord Shiva is portrayed in the deity form instead of the common 'Lingam' (phallus form of Shiva representation). 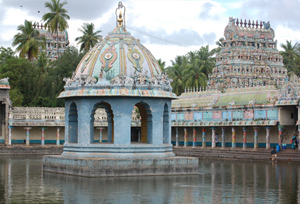 Known for the Lord Shiva temple addressed to Vaidyanatheshwara (God of healing), Vaitheeswaran Koil is positioned at a distance of 13 miles from Chidambaram. It is deemed that taking a bath in the sacred streams of the Siddamirtham tank will heal all ailments. The temple is visited by many devotees from wide and far in order to attain divine blessings of the lord.

By Air: The closest airport is Trichy (150 km) and the next most convenient airport is Chennai, which is located around 250 km from the holy town. From there, one can hire a taxi to make it to Chidambaram.

By Rail: Chidambaram is well connected to all the main cities of the country. Some of the nearest station to reach here are:
Mayiladuthurai - 41km
Vridhachalam - 54km

By Road: The town is connected by excellent roads to all the famous cities in the beautiful state of Tamil Nadu. Frequent bus service is also available to Trivandrum, Chennai, Pondicherry, Thanjavur and Madurai.