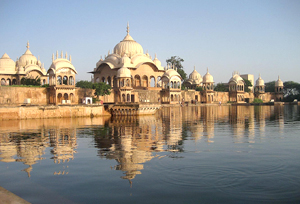 The name of the place might be sounding vary familiar in relation to Lord Krishna and most of them might have already traveled to it. The 'Greatest Karma Yogi of All' Lord Vishnu made it a place to live his childhood in his 8th incarnation as Krishna. The place where he used to meet his childhood sweetheart and friend Radha, spend time with milkmaids playing, frustrating and then again playing with them is none other than Vrindavan.

Mathura, Nand Gaon and Vrindavan are the places associated with the Lord among which Vrindavan (just 10 Km away from Mathura) is believed to be where he had spent the most entertaining aspect of his life in that incarnation and give love in friendship a newer meaning. The site is held high by devout Vaishnavites. Some of the rituals and celebration of the place are quite unique and draws international attention.

To a devotee, whole place would seem studded with hundreds of different temples housing idols and forms of Lord Krishna, alone or with Radhaji or with Balaram and so on so forth on different locations. A day or two would always seem less to such a pilgrim to Vrindavan.

As the name of the town suggests, Vrindavan finds its etymological roots in the history of the place which was covered with the dense thickets of Vrinda or Tulsi- a plant of Basil family of herbs, thus a forest 'Van' with it was come to be known as 'Vrindavan'.

Chaitanya Mahaprabhu is credited with rediscovering of Vrindavan and the essence that was lost in time before 16th century. The place was then subject to development various kings, highlighting the places associated with Lord Krishna and Radha. The place was once flushed with the peacocks and the forest used to echo with the sound made by them but now it has got reduced to a great extent.

The place is also one of the Shaktipeeths, named Bhuteshwar Mahadev. The place is believed to have been the site of fallen hair of Devi Sati, the wife of Lord Shiva when he was carrying her corpse in immense grief and anger. The dead body was cut in to pieces by Lord Vishnu to distract Lord Shiva.
Festivals of Janamashtami and Radhaastami as well the colorful festival of Holi are the main attractions of the place.

Gopeshwar Mahadev: The temple is associated with the legend of Lord Shiva who wanted to witness the divine dance of Lord Krishna and Gopis but since it could be participated only by females, he bathed in Yamuna and assumed the form of a female. It was the n Lord Krishna asked him to guard the gate to deny entrance of anyone without his permission. The temple houses Shivalingam and main ritual includes its bathing with holy water of River Yamuna. Festival of Mahashivratri is a sight to watch and venerate. 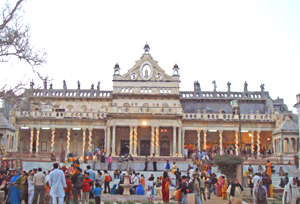 If any temple in Vrindavan could be considered as an architectural masterpiece it could be none other than Shahji Temple which came into existence in the year 1876. The temple suggests itself as a palace meant for divine residence of Radha and Krishna. It is often referred to as Tehre Khambe Wala Mandir.

Banke Bihari Temple: Established by Swami Haridas worshipping the Tribhangu Posture of Krishna, meaning 'bent in three places', the temple enshrines the idol of Krishna half male and half female depicting left side as Radha and right as Himself. It is believed that Lord had come in the dreams of Haridas telling him about the location burying this idol. He dug the idol and then which could be seen installed in a temple made at the same site.

ISKCON Temple: International Society for Krishna Consciousness (ISKCON) is known for contributing to the fame of Lord Krishna and his ideologies of Karma Yoga in the whole world. The temple is known for its exquisite architecture carved in marble. People of different nationalities can be seen here merging in devotion.

Govinddeo Temple: The temple built in 1590 could be counted as an ancient symbol of secularity as exhibited by the policies of Mughal ruler Akbar as he donated the red stones that were used in the construction of Red Fort of Agra under the guidance of Raja Man Singh. The architecture of the temple displays the influence of both Hindu and Mughal architecture. The temple is now only a reminiscent of that past because Arangzeb destroyed the building later.

By Air : Delhi is the nearest place one can fly to reach the towns and cities of Mathura district by road.

By Train : Vrindavan is only 17 Km far from the railway station in Mathura which is the easiest route to take.

By Road : Through Delhi the place is well connected with rest of the cities and town, whether one wishes to take bus or taxi services or have his own car.