Gangtok is a picturesque hill station which draws countless tourists from places far and wide. It features a pleasing climate almost throughout the year. Yet summer season is considered to be the best time to visit this place. Winters also offer a great chance to witness clear views of the enchanting Himalayan peaks, however the temperatures can go below freezing point beginning from December to February. While travelling to Gangtok in the monsoon season can be a little tricky as the heavy rainfalls can cause lots of difficulties.

Summer season is an ideal time to make a visit to Gangtok. This season features a moderate climate which begins in March and ends in June. The average temperature during summers hovers around 22°C making the weather a lot enjoyable. Summers offer the perfect time to explore Gangtok in the most ultimate way.

Monsoons in Gangtok set in the month of July and last till September. In this season, this place witnesses heavy rainfall causing landslides that cut off routes and disrupt travelling. Hence it is advised not to make plans for Gangtok during the Monsoons.

Winters in Gangtok start from the month of October and end in the month of March. This season opens up to the beautiful views of the mountains and valleys with the clear blue skies in the background. The temperature in winters averages between 4 °C and 7 °C. The months of October and November are pleasing, while towards December and January the temperature starts dropping and goes below the 0°C mark. 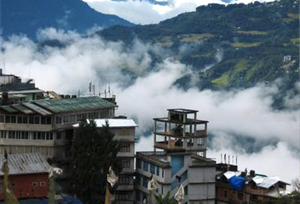 This causes extreme cold conditions causing fog which disrupts travelling. Though snowfall is very rare at this spot, but the routes to the high altitude places remain closed due to heavy snowfall.

Points of Interest: Must Visit Places in Gangtok

Where to Stay in Gangtok

Top Things to Do & See on Your Trip to Sikkim

Sikkim Travel Information at a Glance