Madhya Pradesh, the land of diversity is one of the most exciting wildlife destinations in India. For avid nature lovers, there are 9 National Parks, 6 Tiger Reserves and 25 Wildlife Sanctuaries to quench the adventure thirst. The heart of India, Madhya Pradesh is a kaleidoscope of nature. Plan a jungle tour to Madhya Pradesh to catch the true spirit of the Indian jungle. 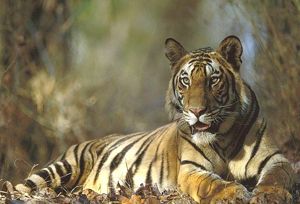 Madhya Pradesh is one of those promising states in India where the chances of spotting a tiger are tremendous. Whether it's Bandhavgarh or Kanha or Pench, each and every national park is far from the civilization and has a rustic charm of its own. Remarkable flora and fauna of these nine National Parks is matched by scenic landscapes along with the incredible diversity. Some of the national parks, including Bandhavgarh were once the hunting ground of the Royals.

Who can forget the famous classic novel, the jungle book? Yes, the adventures of the little boy, Mowgli with Sher Khan and Bagheera. The inspiration that lead Rudyard Kipling write Jungle Book was the charm of the Kanha and Pench National Park. Bandhavgarh National Park in Madhya Pradesh has the highest density of tiger population in India, spotting a tiger here won't be difficult. 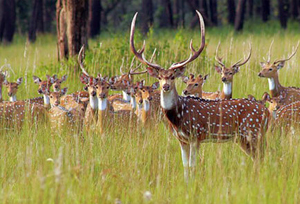 Tiger Reserve in Madhya Pradesh Madhya Pradesh alias the tiger state is undoubtedly the best places to spot tigers. Yes, it right. Bandhavgarh National Park has the highest density of tigers in India. Entirely there are six tiger reserves in India. In fact, two of its tiger reserves are known to spot the wild cat- Kanha and Bandhavgarh National Park. In all these reserves, the tigers can be seen meandering around freely. Other than tigers, here one can see deer, leopards, etc. In all these tiger reserves, the animals are preserved under the conservation initiative, Project Tiger.

Fossil Reserves in Madhya Pradesh Madhya Pradesh has everything that a nature lover can ask for in their desirable destination. There are national parks, wildlife sanctuaries, tiger reserves and fossil parks as well. The fossil park that has spread over the Mandla district has fossils that are as old as 40-150 million years old. Sprawling over an area of 274,100 square metres, here one can see the petrified trunks of ancient trees and rocks. Plant, leaf, shell and fruit seed fossil that are seen here as old as 65 million years. All these fossils look ordinary in the form of rock. Palm fossil is the attraction of the park. Fossils of the park have been overlooked and damaged by the tourist and agriculturist.

Madhya Pradesh offers some of the best India's jungle and amazing wildlife spotting opportunities. Plan a wildlife tour in Madhya Pradesh and discovers how harmonic and intricate nature can be. Madhya Pradesh is unique. It's a paradise.