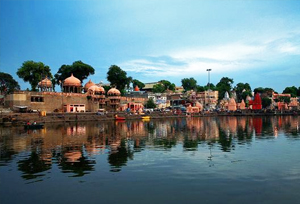 Home to a large number of temples and religious sites, Ujjain is a very important destination in the state of Madhya Pradesh, which fascinates its tourists with its religious significance. It is one of the seven sacred cities in India, where the famous Hindu festival 'Kumbh Mela' is organized every 12 years. A large number of tourists including foreigners visit this wonderful destination to enjoy the sight of splendid temples and other places of worship that enhances the beauty of Ujjain. Being one of the most popular tourist hubs in Madhya Pradesh, Ujjain is definitely an ideal site for religious tourism in India.

Popularly known as Ujain, Ujjayini, Avanti, and Avantikapuri, this majestic town is located on the eastern bank of the Kshipra River. It houses country's most beautiful temples and shrines and other historic buildings, that represents the great work of the Gupta dynasty, who has given its best to the city. The Mahakaleshwar Jyotirlinga shrine is one of the most popular tourist destinations in Ujjain, which pulls a large number of tourists from different parts of the world to see the best of this historic city.

There are a couple of sculptures and monasteries spread around the Ujjain city that gives the evidence of Buddhism, thrived here in the 4th century. The city has always been in the circle of most artistic and religious places in Madhya Pradesh that has produced many astronomers and poets. Tourism in Ujjain is at its peak, all because of its amazing heritage buildings and a plethora of glorious temples that reign the old world charm of Gupta Dynasty.

Things to Do and See in Ujjain 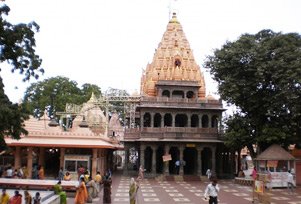 Where to Stay in Ujjain

Ujjain is a popular tourist destination of Madhya Pradesh, visited by thousands of tourists every day. A lot of tourists seek accommodation facility to stay comfortably in Ujjain during their religious journey and with a plenty of options to take a halt here, Ujjain is looking after the need of every tourist pretty easily. Have a look at the most popular hotels in Ujjain, equipped with all the necessary facilities…

Ujjain has always been a symbol of culture and tradition and it is an ideal destination for shopping ethnic handicraft products. One can buy beautiful ethnic ornaments, keepsakes, papier-mache products, bamboo goods, and traditional clothes from the local markets here. Some of the popular shopping destinations in Ujjain are Treasure Bazaar, Devine Valley, Pakiza, Mahakaleshwar Marg, Free Ganj, Jawahar Marg, and Gopal Mandir Marg.

By Rail: The nearest railway station is Ujjain Railway Station, which is around 1km from the city centre. It is well-connected to major cities like Mumbai, Delhi, and Bengaluru. One can take rickshaws, buses, and taxis from the railway station to reach your desired destination in Ujjain

By Road: Ujjain is well-connected through road to neighbouring cities like Indore, Gwalior, Mumbai, Ahemdabad, etc. and there are regular buses that allow tourists to travel Ujjain comfortably.

Best Time to Visit The worldly charm of Ujjain can be best felt during the winters or spring, i.e. between October and March. A lot of tourists visit this magical city to feel connected to the god and to spend their holidays in an absolute bliss amid the captivating surroundings of Ujjain.