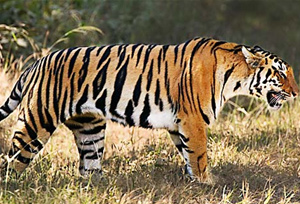 Panna National Park located in Panna and Chattarpur district of Madhya Pradesh is formally being renowned as the 22nd tiger reserve of India and fifth in Madhya Pradesh. By covering an area of 542.67 sq km, Panna Reserve lies besides the areas of the Ken River at the central state of India, Madhya Pradesh at a distance of 57 km from Khajuraho, a world heritage center. Panna Tiger Reserve was being found as the best managed and maintained national parks of India by the Ministry of Tourism of India and this reputation brought the park the Award of Excellence in the year 2007. Thanks to all the efforts of Mr. R. Shreenivasa Murthy, a forest officer of the area who brought his best efforts to bring the Panna Park as the best managed and developed park in the area, in collaboration with his team.

In the tropical region of Panna the climate of the reserve area is sometimes so pleasant, sometime so scorching during summers but with heavy rainfalls the area is again plush with greenery to make the ambience more appealing.

Ken River flows through this reserve and creates beautiful waterfalls on its way to the valley. The park has numerous sites of historical importance with stone paintings dating back to Neolithic era. The ideal home to Indian tigers, Panna is composed of deciduous forests to include other species like Indian wolf, four-horned antelope, sloth bear pangolin, rusty spotted cat, leopard, carcal and gharial.

Panna National Reserve was established in the year 1981 by the Government of India. This 22nd tiger reserve of India that was recognized under the project tiger was also declared as a Project Tiger Reserve in the year 1994. The area of Panna also included some of the major parts of the former Gangau Wildlife Sanctuary which was created in the year 1975. The reserved forests of the Reserve in Panna district and some protected forests on Chhatarpur district were the hunting preserves of the erstwhile rulers of Panna, Chhatarpur and Bijawar princely states. Today the area of Ganagu Sanctuary is the part of the territorial forests of the present North Panna Forest division to which a portion of the Chattrapur Forest division was also added later.

It was in the year 2008 that the real story starts when the reserve area of Panna lost all its tigers to poaching leaving only 2-4 tigers left. Gradually, it caused the loss of the morale of the staff of Panna jungle authority and so in the following year, i.e. in 2009 Mr. R. Shreenivasa Murthy, IFS as field director of Panna Tiger Reserve initiated the task of reintroducing tigers into the park. In collaboration with WWF and PATA, Murthy introduced two tigers to Panna, one from Bandhavgarh and the other from Panna Tiger Reserve with intricate scientific inputs.

Under this project Mr. Murthy and his team translocated one male from Pench and a tigress from Kanha with proper monitoring and protection, where they achieved successful breeding to bring four litters to them. Since then, the officials are focusing on the reproduction of more and more cubs in the area to maintain the previous counts of the tigers in Panna. 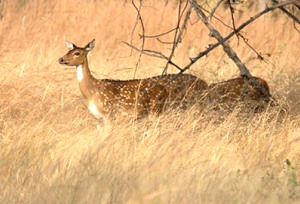 Mammals
Today Panna is the most outstanding, well-managed habitat for all those miscellaneous wildlife creatures of India. The national park is an ideal home to variety of flora and fauna including vultures, cheetals, chinkaras, sambhar and sloth bears. Panna is also an ideal home to the king of the jungles- the royal tigers (Panthera tigris) along with his fellow beings leopard (Panthera pardus), wild dog (Cuon alpinus), wolf (Canis lupus), hyaena (Hyaena hyaena), caracal (Felus caracal) and other smaller cats.

The wooded areas are dotted with sambar, the largest of Indian deers, chital and chowsingha. One can easily see nilgai and chinkara in most open areas in the grasslands, especially on the periphery.

Avifauna
The number of bird species found in Panna is 200 that include the migratory counts. One can find the species like white necked stork, bareheaded goose, honey Buuzzard, King vulture, Blossom headed Parakeet, Paradise flycatcher, Slaty headed Scimitar babbler for the most chirping and wildering effects in Panna.

Reptiles
Panna also boasts variety of snakes, including the python and other reptiles in the vicinity. 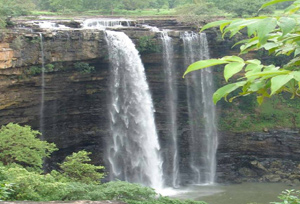 Raneh Falls : one of the prominent waterfalls in the Panna Reserve area that emerges from the confluence of Ken and Khuddar rivers. This waterfall is being named after King Rane Pratap who was the erstwhile ruler of the region. Raneh Falls forms the 30 m deep and 5 km long canyon to get down into the regions of the Ken Gharial Sanctuary. The surroundings of the falls are adorned with crystalline granite, which is present in varying shades ranging from pink, red and grey. Apart from the large and small falls that are formed at the confluence, some seasonal falls also appear during monsoon season which is really worth-watching.

Ken Gharial Sanctuary : one of the prominent sanctuaries in Panna outskirts to be established with an objective to conserve the endangered species of Indian Gharials. Ken Gharial Sanctuary is being placed at the assemblage of Khuddar and Ken rivers in Panna, Chattrapur district. The sanctuary is stretched across an area of 13.5 sq km and was established in the year 1985.

Open for the tourists from sunrise to sunset, the sanctuary serves as a natural habitat to various other species of reptiles including 6 m long fish-eating gharial. Surrounded by dense forests, the sanctuary is also being flourished with 45 km of river stretch with sand banks and offers shelter to wild boar, chinkara, blue bull, peacock and chitals.

Mahamati Prannathji Temple : Mahamati Prannathji Temple is an important pilgrimage of Pranamis and attracts number of devotees during Sharada Purnima. The legendary story tells that Mahamati Prannathji lived at this site for 11 years after which he took samadhi inside one of the domes of this temple. The temple was built in the year 1692 with unique Muslim and Hindu architectural styles in its domes and the lotus formations. The temple is divided into six parts namely Shri Gummatji, Shri Bangalaji, Shri Sadguru Mandir, Shri Baijurajji Mandir, Shri Chopada Mandir and Shri Khijada Mandir.

The premier attraction of this pilgrimage site is Shri Gummatji, which is a circular building with nine marble domes. Eight of these domes represent the eight directions and central dome has a divine golden Kalasha. Apart from this, Kaman Darwaza is a famous temple gate, which is constructed in silver metal.

Madla : Madla is a picturesque village on the banks of the River Ken in Panna District. Located simply about 20 km away from Panna, this village is the true highlight of the densest jungle patterns of the area with traditional attractions of the area. The nearest airport to Madla is Civil Airport Khajuraho (30 km). Satna Railway Station (91 km) is the closest railhead. State Highway 6 connects this village with the airport and the park. The Jugal Kishore temple and the Pran nath Temple are the attractions a visitor should not miss out around Madla.

Ajaygarh Fort : This is an old fort elevated at a height of 688 meters and was the capital of the Chandelas during their decline. Chhatrasal presented this grand fort to his son Shri Jagat Raj in 1731. The Ajaygarh Fort is 36 km from Panna National Park.

Nachna : Nachna was an ancient famous city of the Nagvakataka and Gupta Empire which is stretched across 40 kms from Panna. It is also known for the Chaturmukha Mahadev temple named after the colossal four faced lingam which is still enshrined inside.

There are two major entry zones for Panna Tiger Reserve namely Madla and Hinouta which remain open for the tourists between 16th Oct- 30th June, every year. For the most rewarding safari tour in Panna National Park the jungle authorities present the jeep facilities to get inside the dense ambience of the reserve and encounter the wildest ranges of Panna inhabitants. An hour long boat ride is also available by the officials to catch the glimpses of aquatic creatures and other animals around the lake. Besides all these availing for Panna Safari, an elephant safari is one of the best admiring facilities for getting the complete visualization of Panna creatures in a natural high definition mode. And the major attraction of the reserve is the night safari being offered at Gangau regions for the most adventurous and challenging approach in Panna.

The Safari Timings are:

By Air : The nearest airport is Khajuraho (25 km) which is well connected to the capital city Delhi & the city of Taj Mahal-Agra.

By Bus : Four wheel drive petrol vehicles can be perfect for the wildlife enthusiasts watching and going around the reserve. Rough terrain, un- medaled roads; steep inclines are difficult for other vehicles. Private vehicles can be hired at Khajuraho/ Panna.