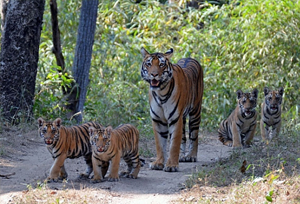 Once a famous hunting ground of the Mughal emperors & Maratha royals, Madhav National Park is now a glorious wildlife sanctuary, in the Shivpuri district of Madhya Pradesh, Central India. Spread over an area of 354 Sq. km, this verdant piece of jungle offers amazing views of lush greenery and architectural wonders, edified by the erstwhile rulers of Gwalior. This park has witnessed a lot of royal movements right from the time of Akbar, who is believed to have captured elephants from here in 1564. Madhav National Park fascinates tourists with its unique surroundings that comprise lakes, dense woodlands, & castles.

It gives a wonderful experience to the wildlife buffs and nature lovers, who are keen to explore the surroundings of this majestic woodland, inhabiting animals like tigers, Nilgai, Sambar, hyena, sloth bear, and crocodile. This park was named after Madho Rao Scindia, the Maharaja of Gwalior from the Scindia Dynasty of the Marathas. It was declared as national park in 1958. A lot of tourists visit this captivating forest area to discover its flora and fauna and to see the sights of amazing monuments, that once belonged to the royals of Gwalior. 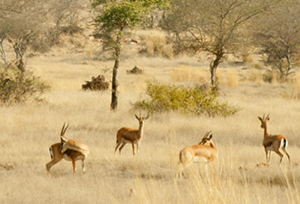 Madhav National Park is a combination of dry deciduous & dry thorn forests that make home for different variety of antelopes like Nilgai, Chinkara, and Deer, and carnivours such as leopard, wolf, jackal, fox, wild pig, etc. Its unusual terrain of hills, dry, mixed forests, grasslands, and lakes, makes it a perfect destination for sighting a variety of wildlife, especially avian species. The Sakhya and Madhav Sagar lake, located in the center of the forest, support a rich variety of migratory birds including geese, pochard, pintail, teal, mallard, and gadwall. These lakes are great nesting ground for birds and marsh crocodiles, that can be spotted here in abundance. 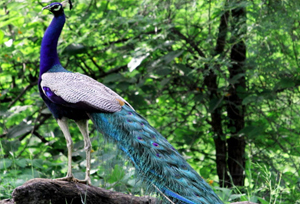 George Castle: This beautiful castle was built by Jivaji Rao Scindia in 1911 for British King George V, to make arrangements for his stay in the jungle. Though, he never stayed here, but this spot was widely used by members of the British Army and Royal families as a shelter spot while on a hunting expedition. The castle is built at a height in the center of the jungle and offers refreshing views of the lake, especially during the sunset and sunrise.

Sakhya Sagar Lake & Sailing Club: Tourists can enjoy boating in this lake and experience bird watching while riding through the water, surrounded by exotic flora. This lake is an important biodiversity support system, which provides a rich habitat to a variety of reptiles & birds. Some of the important reptile species that can be spotted here are marsh or mugger crocodile, Indian python, and monitor lizard.

By Road: Regular buses are available from Gwalior, Jhansi, Jabalpur, Rewa, and Shahdol to reach the Madhav National Park

One can find several budget and mid-range rest houses and lodges in the park, run by the state tourism department, to spend a comfortable night in the park without spending much. Check out the list below…

Months between October to March is perfect to visit the Madhav National Park, which record a good population of migratory birds in winter season. Summer months are extremely hot here as the temp rises to 47° C, however winter months record fall to 3° C.

Opening Hours: Park is open all through the year