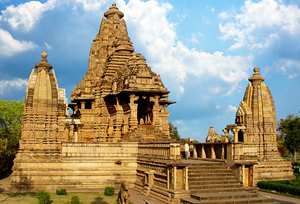 Khajuraho was earlier the cultural capital of Chandela Rajputs who ruled this part of India during 10th to 12th centuries. Built over a span of 200 years (950-1050 AD), there were around 85 temples during that time which reduced to 22 and now it's preserved by the State Government. Sprawled over an area of approx 20 sq.km in the northern eastern part of the state, Khajuraho is a popular tourist destination which are categorized into three sections including western, eastern and southern temples.

Things to Do and See in Khajuraho

Where to Stay in Khajurhao

Tourists can enjoy the festival of Classical Dances in Khajuraho which is held every year in the month of February and March. In this week-long festival, you'll love to encounter the seven classical dances of India which are performed by famous dancers of the India. The dances which are performed during this festival include various Indian classical dance genres like Manipuri, Bharat Natyam, Oddissi, Kucchipudi, Mohiniattam, Kathak, and Kathakali.

Khajuraho is a famous destination in India that draws a number of tourists from all across the world. Shopping here can bring a pleasant experience if you know from where to shop and what to buy. There are various handicraft stores and Crafts Emporium from where you can buy various sculptures of brass, iron and stone. On Tuesday, a weekly bazaar is also held at Rajinagar (5 km from Khajuraho) where you get a huge collection of brass and silver items at economical prices. Including these, you can also choose to shop at Oswal Complex and City Center in Khajuraho.

By Air: Civil Aerodrome Khajuraho Airport in Khajuraho is the nearest airport (Approx 6 Km) that connects several cities of India like Mumbai, Kolkata, Bhopal, Varanasi, and Delhi. Travellers from abroad can get flights from Mumbai and Delhi.

By Road: There are various private buses which ply from Khajuraho to several other cities. Major cities like Jhansi, Satna, Harpalpur, Jabalpur and many more are well connected to Khajuraho by road.