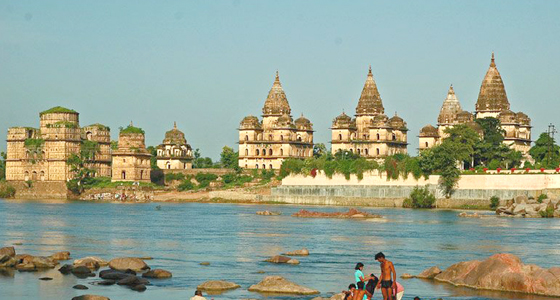 Nestled near the banks of Betwa River, Orchha is a beautiful tourist destination in Tikamgarh district that forms an integral part of the tourism in Madhya Pradesh. The name of the city means 'Hidden Place', which was established in the year 1501 by Maharajas Rudra Pratap Singh. It's one of the popular tourist destinations in the state that boasts off striking palaces, carved temples, forts and other structures. Travel attractions in Orchha including Laxminarayan Temple, Sunder Mahal, Chattris of Orchha, Ram Raja Temple, etc., make an inherent part of the tourism in Madhya Pradesh and add pleasant sightseeing tour in the district.

Once you moved into by a gate, you'll find it's crowned with a beautiful red, elephant –headed Ganesh which gives a great pleasure to the heart. Tourists are mostly beguiled with its unique architecture and monuments of historical and religious significance. Travelling to this enchanting place will give you a beautiful journey of the bygone era and will get you through the record of medieval history. It brings out the tales of battles between kings and emperors.

As per the legend, this town was built by Raja Rudra Pratap in the year 1501 which is at the distance of 16 Km from Jhansi in Uttar Pradesh. Annulated by rising hills, Orchha is wadded with sweet aroma of custard apples. This place was earlier ruled by Bundelas for two centuries which left a rich heritage to descendants as their architectural style was believed to be very unique.

Orchha highlights the magnificence and splendour of the Bundelas. Snuggled in the lustrous Bundelkhand countryside, this beautiful place is bestowed with natural beauty and grandeur. It's a must visit destination that gives a delightful experience to leisure travellers. A small sleepy village encircled by a woody forest looks more beautiful with its majestic temples and garish monuments. Few major attractions like Dauji ki Haveli, Lakshmi temple, etc., shouldn't be missed by any tourist visiting here.

If you want to soak in adventurous, religious and peaceful activities, then plan to visit Orchha and make your day pleasurable.

Things to do and see in Orchha 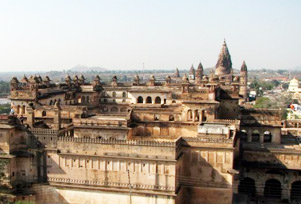 Accommodation in Orchha is very easy as you can find a plenty of luxury resorts, heritage hotels and budget hotels.

Some of the popular hotels of Orchha include:

Orchha has few shopping places like Orchha Square from where you can buy Dokra crafts and Baster Traditional handicraft items in attractive prices.

Best Time to Visit: You may go through the best of Orchha from the month of October to March when the weather remains pleasant and it keeps it arms open for travel enthusiasts to explore the most famous tourist destinations of the state.