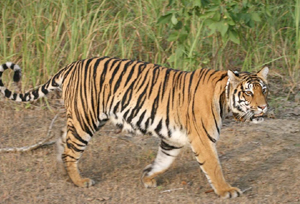 Kanha National Park is one of the most striking national parks in the Maikal range that proves to be the most inspiring place for the creative creatures. Creatures that don't live in the jungles but have great fascinations for the jungles, the intelligent creatures, the human being, who have great alluring for the wildlife and natural bewilderment. Among those intelligent creatures, the most notable writer and novelist of 18th century Rudyard Kipling once visited this place, the place which is the perfect home to magnanimous counts of Barasingha, the Swamp Deer. And to the curiosity of many, the invention of "The Jungle Book" by Rudyard Kipling was the result of the perfect inspiration of Kanha and the nearby areas.

With tropical based climate, summers at Kanha are so rigorous to be reached up to 43° C but the central highland area of Madhya Pradesh is also uniquely being doused with heavily monsoon pours with the average rainfall of 1800 mm to make the surrounding more scenic and greenish. On the contrary, winters can be found more shivering in the dense jungles of Kanha to drop the mercury level by -2°C. 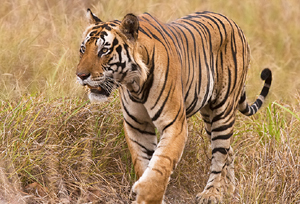 Originally a part of the Gondwanas (i.e. the land of the Gonds) in the year 1880, the Kanha Tiger Reserve (at an altitude range of 600m-870 m) was inhabited by two major tribes of Central India, the Gonds and the Baigas which is still being captured by these tribes at its outskirts and then later was entranced by two major sanctuaries, the Hallon and the Banjar sanctuaries by covering the areas of 250 sq km and 300 sq km respectively. In the year 1862, Kanha was inhibited by the forest management rules where many illegal acts were prohibited in the jungle. Further, in 1879, the area was declared as a reserve forest by extending its parts into 1949 sq km and with the introduction of "The Jungle Book", the amazing landscape of Kanha and Pench came into recognition in 1880. The history of Kanha National Park became more interesting when in the year 1933, Kanha was declared as a sanctuary after receiving notable appreciation from worldwide due to its unmatchable landscape and amazing highland beauty. Gradually, many naturalists found Kanha as the premier national park in India and in 1991 and in 2001 Kanha National Park was honored as the most tourism friendly national park in India by the Dept. of Tourism, Govt. of India.

The Kanha National Park is reckoned as the perfect habitat for large amount of herbivores and carnivores animals. Tourists can discover the abundant varieties of wildlife. It is the only location in India where the most abundant variety of Barasingha can be found and so does to call them as the "Jewel of Kanha".

Some of the commonly found wildlife in Kanha National Park : 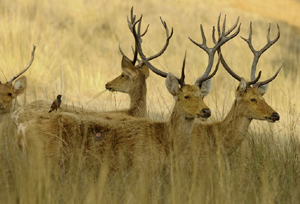 Kanha is articulated with three major types of forests namely:

These varieties are boasted with over 200 species of flowering plants and the major floras can be discovered here are: Sal, Saja, Lendia, Dhawa, Tendu, Palas, Bija, Mahua, Aonla, Achar and Bamboo. Apart from that many species of climbers, forbs and grass can also be found here.

Bamni Dadar - The Bamni Dadar area is very next to Kanha Tiger Reserve which is an ideal place to hang out with family and friends. This is also called the sunset point which is scenic at its best point. Visitors can find the best sunset view from this spot. This sunset point equally brings the eminent natural splendors of the reserve area. The area is also being flourished with many grazing animals like ambhar, barking deer, gaurs, and other animals to make the ambience more magical.

Kawardha Palace - A simple three hours drive from Kanha Reserve can take the visitors to this astounding palace which was built during the year of 1936-39 by the King Dharamraj Singh. Now the area being famed as the traditional resort is being spread in eleven acres and is being adorned with beautiful Italian Marble. The other attractions near the Kawardha Palace are Mandawa mahal, Krishna Temple, Madan manjari Mahal and Bhoremdeo Temple.

Bandhavgarh National Park - Located 250 kms away from Kanha Reserve the Bandhavgarh Tiger Reserve is the area which is best known for the great population of tigers in India. Bandhavgarh area is also the perfect home for the rare species of white tigers, which was once the hunting reserve for the Maharaja of Rewas. One can also find the famous Bandhavgarh Fort to highlight the historic legends of the prehistoric era and to witness large number of tiger species at the fort.

Jabalpur - This is the city of multi-colored marble rocks and many historical forts & artifacts can be found at the surroundings of the natural beauty. Jabalpur, the third largest city of Madhya Pradesh showcases the cultural part of the state and is best known as the "land of the Gondwanas". Quite closer to Bandhavgarh, the tourists can get to know about the cultural assets along with the wildlife wanders in the form of Khajuraho Group of temples, Balancing Rock, Chausathyogini Temple, Mandla Fort and more.

Tadoba National Park - This reserve is best known as the oldest national park in Maharashtra, quite closer to the border area of MP and closer to Kanha Reserve, the Tadoba National Park is being stretched across 120 sq km area at an altitude of 200 m. The wildlife enthusiasts can find this place as much as heaven and have christened this place as the 'jewel of Vidarbha'. The name Tadoba has been extracted from the local deity of Gond tribes as 'Taru' who was killed in an epic fight with tiger. One of India's 28 tiger reserve Tadoba consists of variety of wild creatures including around 50 tigers and other rare wild species.

For the most bewildering safari moments, 04 WD Open Jeep Safari is the coolest option to observe the wilderness of Kanha very closely and clearly. The 04*04 Open Jeep with the group of tourists is allowed in the park vicinity at fixed timings along with the company of an experienced naturalist. In Kanha, the tourists can find four different zones namely Kisli, Mukki, Kanha & Sarhi for enjoying the jeep safari rides. The added advantage of Kanha safari is that the wildlife lovers can easily make the online booking for the entry tickets or even get it from the tour operators if available, the entry tickets can also be collected from the booking window at the entrance gate of the national park. For additional services like vehicle charges and guide fee are other expenses which are demanded during the Kanha safari tour and are termed under the additional expenses other than the entry tickets.

At Kanha vicinity, a single day jeep safari can be done at two times, once in the morning shift and the other shift is for late afternoon safari in a six-seated open vehicle. In each vehicle 6 passengers are allowed to travel along with one naturalist and one driver. Noticeably, only limited no of vehicles are permitted to enter inside the forest in each shift. It is advisable to book the entrance ticket in well advance to avoid any chance of unavailability of safari seats.

Safari vehicles are generally permitted to enter inside the national park in every shift :


Kanha National Park remains open for the visitors from 16th October to 30th June. Considering that the safari timings are :


Some Essential Tips for the Visitors :

By Air - Nagpur at 266-kms is the nearest Airport to visit Kanha National Park and is linked up by various domestic airline services with Mumbai.

By Rail - Jabalpur at 169-kms is the convenient rail head to visit the Kanha National Park.

the accesses are : Koshi - Kanha (9-kms), Kishi - Katia (4-kms), Kishi - Mukki (32-kms). There are regular to and fro bus services available from Jabalpur to Kanha.