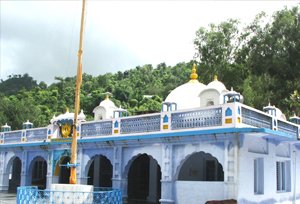 In the land of Buddhism and beautiful, serene landscapes, the existence of Rewalsar Sahib Gurudwara in Mandi will make people look closely to ensure that they are seeing right.

Rewalsar Sahib is a small Gurudwara built in the honor of Guru Gobind Singh, the tenth Guru of Sikhism. The terrains surrounding the Gurudwara create a magic which invites the pilgrims from across the globe. Legends say that the Guru Gobind Singh stayed at this place where Gurudwara is currently located. When Guruji was fighting against the Mughal king, Aurangzeb, he chose Rewalsar to meet with the kings of the different hill states in order to gather support for his battle. In order to commemorate the Sikh Guru's visit, a Gurudwara was made by Raja Joginder Sen of Mandi in 1930.

Perched on a hilltop, the Gurudwara is easily recognizable from a great distance due to its pristine blue color and massive domes. The tourist will have to climb 108 stairs to get to this sacred place of worship. Next to the Gurudwara is a water tank; taking a dip here is a holy practice and can relieve people from all the diseases and is considered as lucky. In fact, Rewalsar Sahib Gurudwara is revered by Buddhists who regard him as a saint.

The Gurdwara is particularly sacred to the Namdhari Sikhs due to its mention in Sau Sakhi (stories about the Guru Gobind Singh) as a divine shelter for the needy people. People of every religion visit this shrine in order to gain consolation and blessings of the divine deity.