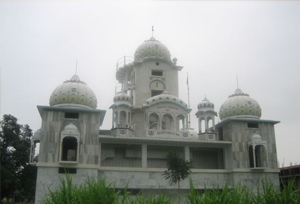 Gurudwara Bhangani Sahib, Paonta Sahib has a rich and colorful history. It is located in the Sirmour district of Himachal Pradesh. Surrounded by lush green farms, the gurudwara is a place which is blessed by divinity and tranquillity.

This Gurudwara was built in the memory of the war victims and signifies victory and power of the unity of Sikhs. Currently, sewa of the Gurudwara is performed by Sant Baba Pritam Singh Ji from Ludhiana in the Punjab. The white marbled shrine amidst the paddy field is simply mesmerizing, and is worth a visit on a short trip to Poanta Sahib.