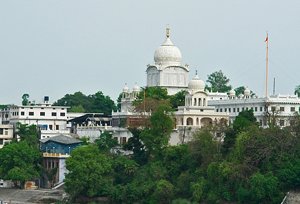 Gurudwara Paonta Sahib is a revered shrine of the Sikh religion. This sacred shrine not only renders a spiritual comfort, but also offers us an insight into how Sikhism has sustained. The place got its name either from the fact that Guru Gobind Singh set his foot here or because he lost an ornament here that he used to wear on his foot.

As per stories, the Gurudwara was once visited by Guru Gobind Singh Ji, the tenth guru of the Sikhs. The Sikh Guru came to Sirmour on the invitation of the Raja Medini Prakash and was so impressed with the courtesy of the king that he decided to spend the next four years at Poanta and left a written account of his life in the kingdom, which he described as the happiest years of his life. 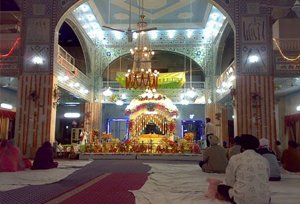 It is said that, once Raja Medini Prakash and Guru ji were exploring the place. On their excursion, Guruji was so much impressed that he decided to construct a camp on the bank of the river. Guruji laid the foundation of this holy city with his own scarred hands and named it Paon-tikka, which is known as Paonta Sahib today. As a token of respect and gratitude, Raja Medini Prakash decided to build a Gurudwara on the bank of Yamuna River. Before leaving the Gurudwara, Guruji fought many battles against some of the neighbouring hamlets.

The current structure of the Gurudwara was constructed by Baba Kapur Singh in 1823. Earlier, the shrine was located in the middle of thick and luscious forest where Guru Gobind Singh Ji used to indulge in hunting, train his warriors and write literature books. Guru Gobind Singh wrote many important holy books here, including the major portion of the Dasam Granth. Then he left for Anandpur Sahib to create the Khalsa Panth.

On the river bank behind the shrine stands the historical temple of Yamuna ji and besides it the Ma Yamuna Bal Park. Nearby the Gurudwara Paonta Sahib, there is Gurudwara Shri Kavi Darbar Sahib where every year a poetry recitation competition is organized. Sikh pilgrims flock here at all hours, and devotional songs waft over the compound, adding to the contemplative mood. Pilgrims come here to seek spiritual solace.