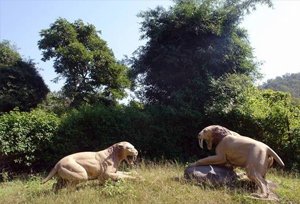 Major Attractions: Skeletons and Fossils of pre-historic animals can be found here

Best Time to Visit: Nahan can be visited any time of the year except January when the climate is extremely chilly. 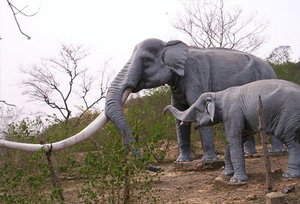 Whether they're skeletons of elephants or the remains of the trees that lived long ago, fossils at Suketi Fossil Park can transport people back through the eons. It gives people an opportunity to peak into the world of the ancient earth. The park has been built and regulated by the Geological Survey of India and Himachal Pradesh tourism. Many scholars visit the Suketi Fossil Park for research work.

Located within 21 km. from Nahan, the park is nestled on the edge of the Markanda River. The Suketi Fossil Park is famous for its six life- size fibre reinforced plastic (FRP) models of pre-historic animals. The park at present has six sets of life-size models of Stegodonganesa (extinct grand elephant), Sivatherium, Colosschelys Atlas (giant land tortoise and Chelonia), Paramachaerdus (Sabre Toothed tiger), Hexaprotodon-Sivalensis (hippopotamus with six incisors), and Crocodilia.

Within the confines of the park, there is a museum as well, which gives researchers and scientist an opportunity to scrutinize about animals and their surroundings. The park and the museum in the fossil park are well maintained by the horticulture department of Himachal Pradesh. The museum exhibits fossils, models, charts and paintings related to the various aspects of plants and animals.

Such tremendous views with quirk models are splendid enough to attract tourists from across the world. The area around the park is converted into a plantation field, where tourists can see beautiful flowers sprouting over the meadows. Plan a trip to Suketi Fossil Park and explore the secrets of the past.