Dubbed the largest tulip garden in Asia, this one of the must-visit places in Srinagar sits at the foothills of Zabarwan Mountain. A seven-terraced garden, Tulip Garden is also known as Indira Gandhi Memorial Tulip Garden after being known as Model Floriculture Center for a long time. The garden is adorned not only with a variety of tulips but also daffodils, hyacinths, narcissus and other ornamental plants.  The water channel running through the terraces adds more charm to the place. Sprawling in 30-hectares of land, this major tourist site in Srinagar comes to live during the spring season when the Tulip Festival is held annually. Opened to public, this festival aims at flaunting the natural beauty of the garden, the rich Kashmiri culture, and its handicraft and cuisine.

Indira Gandhi Tulip Garden is situated at the foothills of Zabarwan Range. Overlooking the iconic Dal Lake, the garden is opened in 2007. It is encircled by Nishat Bagh and Chashma Shahi Garden from three sides. Adorned by 70 varieties of tulips, the garden is one of the most popular tourist attractions in Srinagar. To add more magnetism to the garden, several rose beds are also cultivated.

Indira Gandhi Tulip Garden Srinagar is visited by thousands of tourists from all over the world. The period from March to May is considered as the best time to visit the garden, but April is also a favorite month among flower lovers. 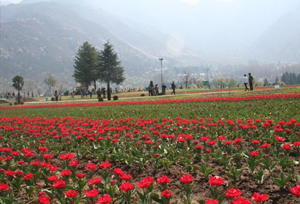 Every year in the month of April, Jammu Kashmir government celebrates Tulip Festival in which tourists can enjoy breathtaking views of the gardens at its full bloom. The festivity is accompanied by several cultural programs. The garden opens from 9:00 am to 7:00 pm every day.

Top Things to Do on Your Holiday to Jammu & Kashmir