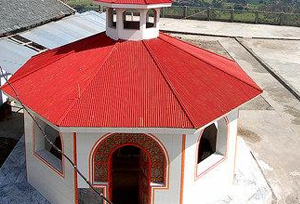 Located in the Bahi Village of Una (Himachal Pradesh), Dhyunsar Mahadev Temple is a popular Hindu Temple which is commonly known as Sada Shiv Mandir/ Shiv Tilla by tourists coming from different parts of the world. The temple is placed on a hilltop with a spectacular view on all sides. The Shiva Lingam at this temple is in the form of Maa Parvati and lord Shiva. The silence and soothing atmosphere around the Temple make this place a worth-visit. You can enjoy the view of Una and other nearby places from the top.

History As per the legend, it is believed that this temple was built by Pandavas in their 'agyat vaas'. In the Dwapar Yug, Shri Dhaumya Rishi came across the Dhyunsar Mountain while wandering there and did tapasya at this hilltop and then Shiv Ji gave him darshan. Since then, people visit here with their wishes and it is believed that devotees wishes get fulfilled after worshipping here.

Fair and Festival During Shivratri, a fair is conducted here when the Shiv linga is showered with milk and butter milk in the presence of a gigantic gathering chanting "Om Namah Shivaye".