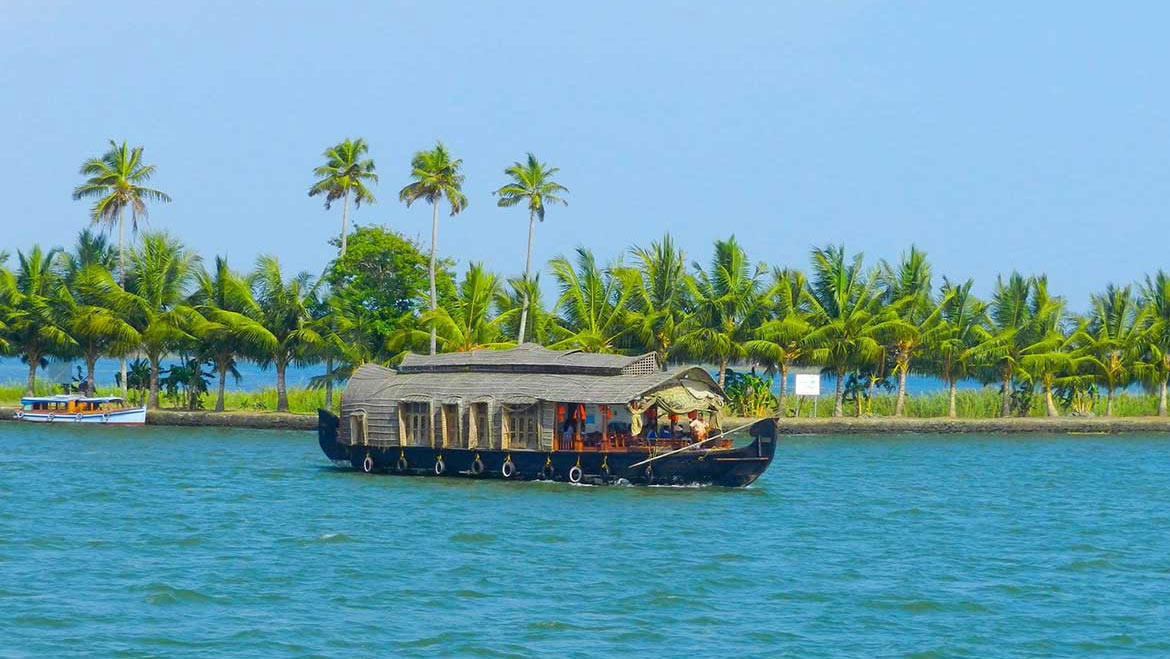 Today’s busy lives of cities are full of noise; full of pollution; full of crowd – be it roads, trains or bus. Even in one’s concrete dwellings one can’t really feel moments of tranquillity, some solitary time; everywhere we are just so connected with the rest of the world, through cell phones and internet that at times it feels suffocating. It’s like the rest of the world gradually drains out the energy from our bodies and souls. If you are one of those who have reached the edge of your endurance then Kumarakom is a place which can give you the opportunity to get back in high spirits.

Kumarakom is one of the most popular tourist destinations of Kerala. It is a village, in the region of Kuttanad, located in the Kottayam district of Kerala, and is about 14/16 Kms from the city of Kottayam. Kottayam is famous for being the first district to have hundred percent literacy rate, in India. In September 2009, it also became the first tobacco free district of India. So the entire district is not only high on the quotient of peace and beauty but also inhabited by a very educated people.

Kerala is well-known for its backwater tourism. These backwaters are constituted of a network of canals, measuring about 1500kms, which are both manmade as well as natural; 38 rivers, and 5 large lakes passing from one part of Kerala to another. In India, only the state of Kerala possesses the phenomenon of backwaters, hence it’s a major tourist attraction. Kumarakom is a group of small islands set in the backdrop of the Vembanand Lake. It is well-known for its rich, green, and beautiful scenery.

Nature has endowed Kumarakom with abundant resources that have led it to be the habitat of a wide variety of plants and animals. Kumarakom bird sanctuary is frequented by a large number of exotic birds all through the year, and Vembanand Lake is home to many species of coastal and freshwater fishes.

You will have many options to choose from when it comes to finding a place to stay. There are budget hotels, home stays, heritage hotels, resorts and luxury hotels. You can even choose to tour the backwaters of Kumarakom in a boathouse. A house boat is the best way to explore the Vembanad lake and its surroundings. Kerala is known for its Ayurvedic treatments all over the world. You can also take advantage of the various time tested treatments. Also, yoga and meditation would also acquire more value when done in the natural and peaceful surroundings, far away from pollution and crowd.

Places to visit in Kumarakom

Spread over 14 acres, the bird sanctuary is the most famous place of Kumarakom, and a heaven for ornithologists. Migratory birds, like Siberian Stork, and local birds like Egret, Darters, Herons, Teal, Water duck, and Cuckoo, are a major attraction in this sanctuary. The best time to visit is between June and August.

The water falls from a height of 100 feet. It is surrounded by rubber plantations. It is a wonderful picnic spot, and makes for a picturesque view. It’s about 18 Kms from Kumarakom.

Vembanand Lake is the biggest freshwater lake in Kerala, and the longest lake in India. It traverses many districts of Kerala and is called by different names in different areas, like Punnamada Lake in Kuttanad, Kochi Lake in Kochi. In a portion of lake, which is known as Punnamada Lake, the renowned Nehru Trophy Boat race is organized every year, on the second Saturday of August.

It is an ancient Shiva temple, 10 Kms from the town of Kottayam. The temple organizes a festival, around February and March, every year that lasts for ten days. On the 8th day, a procession, known as ‘Ezharaponnaana Ezhunallathu’ is taken out with the image of the deity. On this occasion seven and a half golden elephants are displayed. They are called seven and a half because seven elephants are 2 feet long and the eighth one is only a foot long. They are considered the guardians of cardinal directions.

The best time to visit the place is from November to March. But even Summer and Monsoon seasons are very agreeable because of the closeness to the Vembanad lake. The continuous cool breeze from the lake keeps the warm weather pleasant. Also in the month of August and September, many popular boat races, like Nehru Trophy Boat Race, and Sree Narayana Jayanthi Boat race take place, which are a major tourist attraction. During the same period, Onam, the biggest and most popular festival of Kerala, is celebrated. It is a ten day festival and it isbased on the belief that during this period the legendary King Mahabali returns to Kerala.

People of Kumarkom and their Lifestyle –

The staple diet of people includes rice and fish.  Fishing is the main employment of the people. Shell mining is another source of livelihood for many natives. In shell mining, shells are burnt in kilns to get a building lime of excellent quality. Farming is also undertaken, with Paddy being the most cultivated crop. Coconut, cocoa, and banana are also produced. Toddy is a local drink which is extracted from the coconut trees or a palm tree flowers. It is an alcoholic drink. Tourism is also an important activity which assists to boost the economy of Kumarakom and the state of Kerala as a whole.

How to Reach Kumarakom

So don’t delay the therapeutic lap that nature is offering you so abundantly. Grab the opportunity and rejuvenate your body and soul to live a happier life amid the tough and dreary circumstances of life.