Kerala: Birth Place of the Age-Old Science of Ayurveda 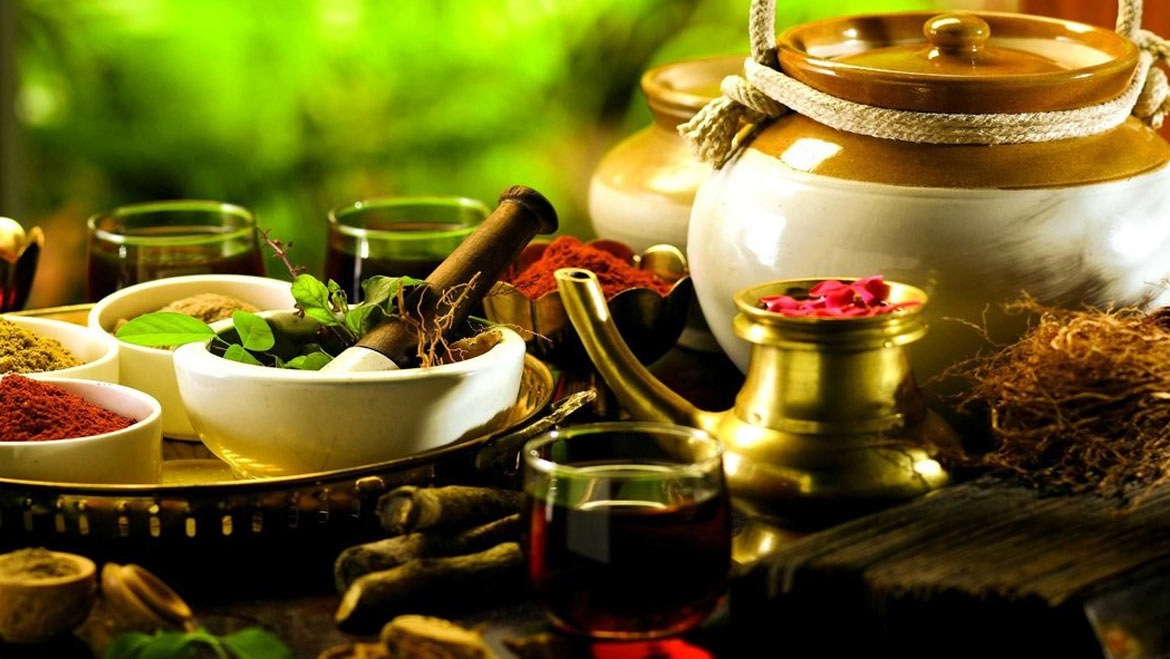 Ayurveda, a method of getting pampered by the bests of Mother Nature has been described in ancient Indian scriptures to be the technique of treating all physical issues starting from the intestinal disorders, mental instability to skin ailments.  With origins that can be traced back to around 5000-6000 years ago in India, Ayurveda treatment stabilises the three major doshas (humours) functioning simultaneously to let our body work in full swing, prescribing particular diet, exercise, herbs, massage and meditation. A completely natural way of treatment trying to balance the harmony between body, mind and soul, Ayurveda is believed to have zero side effects and treats the sufferers with herbal extracts without using any chemical elements.

If Ayurveda is called the mother of all healings then Kerala should be called the maternity home. And the moment you step on the soil of this state you will find this analogy to be perfectly drawn. The salubrious weather, pristine white backwaters and peaceful environment lend a sense of other worldliness to the state of Kerala and establish it as one of the leading Ayurveda destinations in India. It is said that for centuries the Ayurveda Vaidyas (Practitioners) were almost the only rescuer of the masses of Kerala and as a result over the years Ayurveda has grown as a mainstream medicinal treatment in this state. This is the reason why Kerala is the only state in India which practices this system of medication with complete devotion.

Reason behind Developing Nature of Ayurveda in Kerala

Nature has blessed Kerala with its bests and that is the first and foremost reason behind the dramatic growth of Ayurveda in Kerala. It is the one of the few places in the world where an average temperature of 24-28 degree prevails in the rainy season. However, the state experiences cool monsoon season with an equable climate all through the year. All these supportive elements help in the growth of an extensive variety of herbs and medicinal trees required for the extensive growth of Ayurveda in Kerala.

What is Unique about the Kerala Ayurveda Therapy?

The vaidyas of Kerala experiment with the herbal treatment as per the directions prescribed in Ashtangahridayam which is advancement over the earlier samhitas of Charaka and Shusruta. It is the Vaidyas of Kerala who extensively use Kashaya Chikitsa (treatment with concoction) using numerous Kashayams which are scientifically classified to be used in different health conditions. It is the practitioners of Ayurvedas in Kerala who focused on the anti-oxidant properties of Abayangam helping to the profusion of kizhis.

Abhyangam A full body massage done applying warm oil all over the body. The oil used for massage is extracted from various sources like sesame, sunflower, coconut, almond or mustard. Mostly this massage is done by a therapist for 45 minutes to one hour followed by a medicated steam bath called swedana.  Abhyangam rejuvenates the tired body and fastens blood circulation, beautifies the skin and helps delay the aging process.

Pizhichil While doing Pizhichil medicated oils are poured on the body in non-stop streams and two therapists continuously massage for a period of 45 minutes to an hour. Pizhichil helps to balance blood pressure, diabetes, paralysis and similar other diseases.

Shiro Vasti It is considered to be the most important and powerful therapy which is done using oil. In this therapy, certain specific lukewarm herbal oils are poured into a cap set on the head for 45 minutes to 60 minutes. This therapy is mainly prescribed to the patients of neuralgia, optic atrophy, facial paralysis and the diseases damaging carnival nerves.

Udwartanam People looking for a way to reduce weight can try going for this therapy. It is a particular therapy which is dedicated to weight reduction without using any chemical or mechanisms. A particular herbal powder is applied for this and deeply massaged all over the body with special movements for an hour or so.

Khseeradhara Unlike other therapies which involve the usage of herbal oil, Ksheeradhara is done pouring herbal milk streams continuously either on the forehead or over the body. The massage is usually given to people suffering from mental tension, headache, insomnia etc.

Njavara Kizhi Njavara which is a special variety of rice highly enriched with medicinal value is prepared with herbal decoction and milk. The rice is then made up into boluses and used putting into cotton bags. After a rejuvenating massage done applying herbal oils, these boluses are used for fomenting on the body. This particular therapy tones up weak bones and cures spine related problems and muscle weakness.

Panchakarma One of the best Ayurvedic treatments available in Kerala, Panchakarma can be truly called the rescuer of all physical troubles. People treated applying this therapy witness massive change in their health and need to go through certain stages of treatment. A fivefold procedure of medication, Panchakarma includes Emesis, Medicinal enema, Oil enema, and nasal sinus cleansing and reenergises the mind and soul from inside. Before prescribing this particular therapy patients are precisely diagnosed. This therapatic treatment is usually prescribed for primary purification and detoxification and removes toxins from the body. Ayurveda Gram and Sreekrishna Ayurveda Panchakarma Centre are some of the best Panchakarma Treatment Centres in India.

There are several Government funded organisations as well as private Ayurveda Institutes in Kerala serving the needs of the global tourists as well as of the country. Institutes like Kerala Ayurveda Academy have introduced full-fledged papers on the development of Ayurveda across the country. However, people seeking refreshments from stress and exhaustions can also go for herbal massage and therapies in Ayurveda Gram, Sreekrishna Ayurveda Panchakarma Centre, Chingoli Ayurveda Hospital and Research Centre. Today ayurveda holiday is a trending genre in the travel industry and travellers looking for a relaxing break should try this to attain ultimate pleasure.