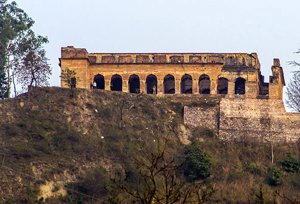 The palace-fort, Sujanpur Tira is situated at a distance of 22kms from Hamirpur town and touches the Kangra border. The fort was built by Raja Abhay Chand of the Katoch dynasty of Kangra in 1758. For more than a century, Sujanpur Tira remained the royal residence for the Katoch dynasty. The fort in the early 19th century was also the residence of Raja Sansar Chand, who is reckoned to be the patron of Kangra School of miniature paintings.

Sujanpura Tira houses five temples and a hall called Baradari, where the court was held in the realm of Sansar Chand. The entrance of the fort is an impressive one with signs of some excellent wall paintings over it. The main attraction of the fort is the Gauri Shankar Temple that is within the precincts of the palace. The temple is dedicated to Lord Shankar and Goddess Parvati and has a large number of wall paintings executed in the precision.