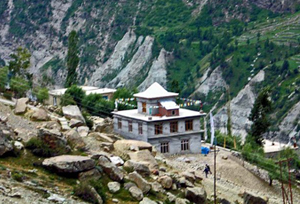 Founded by: Guru Rinpoche or Padmasambhava in the 8th century CE
Best time to visit: May to October

The Mighty Guru Ghantal Monastery is the most popular destination for travellers in the Lahaul region. Surrounded by mountains and rolling sand dunes, the monastery spells magic. It is deemed to be the oldest monastery in the Lahaul region. Legends say that the monastery was established by Guru Rinpoche in the 8th century CE. In the year 1857, historians discovered a copper goblet which is the oldest example of metalwork from the 1st century. The latter instance depicted that the Buddhist civilization was pretty advanced at that time as well. Perched at an elevation of 3160 m on the rocky cliffs of Tupchiling village, the mighty monastery is close to the point where there is a confluence of Chandra and Bhaga River.

Guru Ghantal Monastery is maintained by the order of Drukpa monks and nuns, and like all other monasteries of the order, it owes a loyalty to His Holiness the 12th Gyalwang Drukpa, or Drukchen Rinpoche. The monastery houses some very precious religious treasures with amazing architectural specimen.

In 1959, the monastery went through a major renovation but its charm remained intact. A unique feature of the Guru Ghantal monastery is the wooden idols of the Buddha, said to have been installed by the monk Rinchen Zangpo. Within the shrine, there are many other possessions like sculptures made of clay, numerous idols of Guru Padma Sambhava, Brijeshwari Devi and other lamas, an image of Goddess Kali cast in black stone, paintings, murals and white marble heads of Avalokitesvara which were installed by the founders.

On the outskirts of the monastery is a seven storey fort which is made of stone and timber. The fort was allegedly built by Raja Man Singh who was once the ruler of Kullu kingdom; it even houses a prized sword.

Ever seen Lamas dance? Well, here they do. The annual Ghantal festival organized here sees one day of masked dance and is celebrated on the 15th lunar day. Embark on a journey to Lahaul, and discover the rich heritage of Buddhism.

Other Monasteries in Himachal