A land of prosperity and happiness, Bhutan is a country of pristine beauty and captivating heritage. From famous tourist destinations to popular fairs and festivals in Bhutan, each aspect of the country is equally enthralling. Cultural tourism in Bhutan is a major contributor to the travel sector in Bhutan. Although the natural beauty is what attracts tourists to Bhutan, we suggest you explore the culture and heritage here with these festivals and fairs. Since you might be wondering how to find out about these festivals and fairs, we have curated a list of top 10 festivals in Bhutan you must see for an amazing stay in the land of happiness. 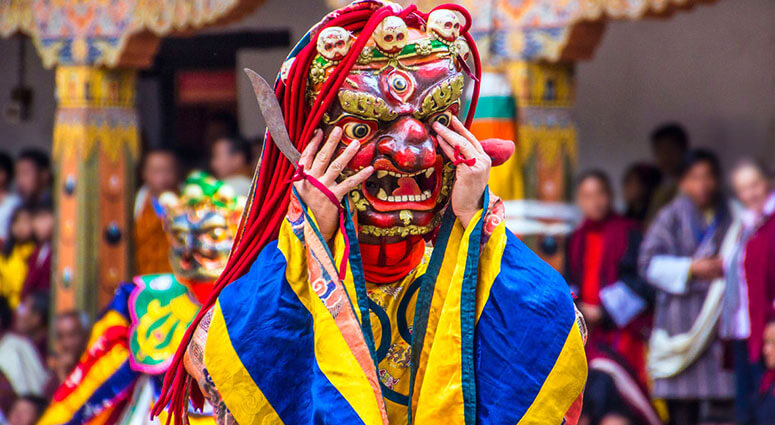 Narrating the tales of the history of Bhutan, the glorious cultural festival of Punakha Drubchen is a celebration of the countryâs victory over the invading neighbouring forces of Tibet. Celebrating the unification of Bhutan as a nation, the festive events reenact the scenes from the fights of Bhutan and Tibet. With no formal Bhutan army, locals came forward to ward off the attacks from Tibet. The locals militias now dress up as the soldiers of that time and enact the battle scenes. Starting as a celebration of Bhutanâs victory, today this festival is an annual event, celebrated with great pride and joy. Also, the winter home of Chief Abbott Je Khenpo of Bhutan, Punakha is one of the must-visit places to visit in Bhutan. 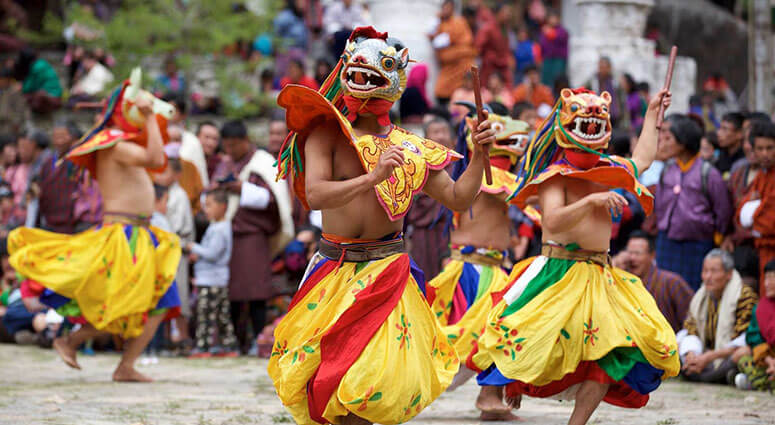 A festival like none other in Bhutan, Gomphu Kora Festival is of prime importance to the locals of Trashigang. To understand the significance of the festival, we need to understand the legend behind the festival. The tale of the Ghompha goes back to 8th century when Guru Padmasambhava meditated in the cave for three days to vanquish the evil that was hiding in the cave. The word Ghompha means meditation cave and Kora means circumambulation. The name refers to the cave formed of a rock-face, which is next to a temple built as a tribute. During the festival, the devotees take a trip around the cave and the festival marks the victory of good over evil.

The trip around the cave is the major attraction on the festival. During the festival, the entire area gets lively and people flock to the site in the traditional finery to offer prayers to Guru Padmasambhava and seek his blessings.

20 Top Places to See and Things to Do in Bhutan 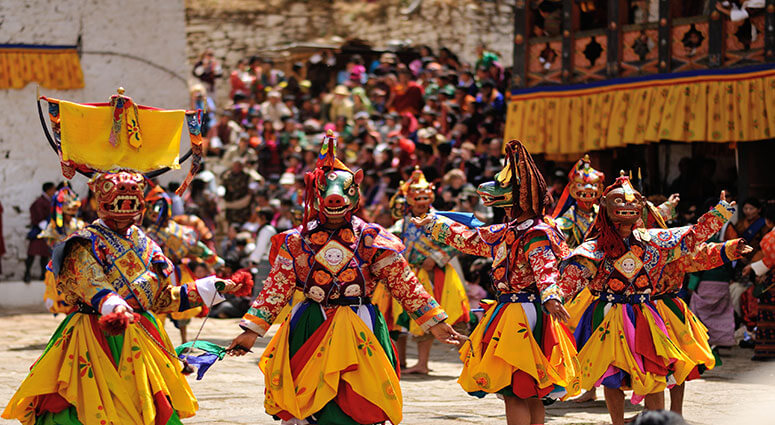 One of the most popular cultural events in Bhutan, Paro Tshechu is a big cultural celebrations during spring time. Celebrated in the city of Paro, the festival witnesses thousands of locals and tourists gathering around the courtyard of the Dzong to celebrate the deeds of Guru Rinpoche. Marked by the masked dance performed by lamas and laymen, the festival is meant to thank deities for their blessings. A must-see during every Bhutan tour, Paro Tshechu allows tourists to have an insight into the vibrant culture of Bhutan. At the end of the festival a four-storey high Buddhist religious scroll(thangkha) is unrolled. The scroll is said to be more than 350 years old. 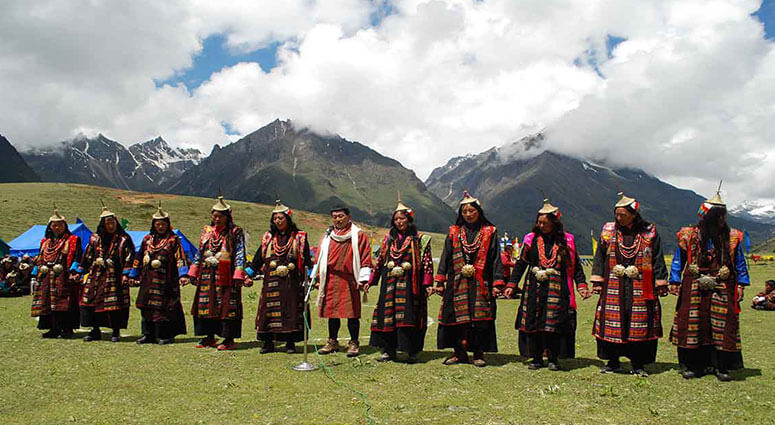 Nestled at 3000m above sea level, the mesmerising Sakteng Valley is home to one of the most exciting festivals of Bhutan. Celebrated by the locals called Brokpas, a semi-nomadic settlement, the festival is the celebration of the local deities for their blessings. An occasion of revelry and merrymaking, the alluring festival is an insight into the local culture. Living close to the nature in the pristine valley, Brokpas have remained untouched and they have managed to preserve their centuries-old traditions and practices. During the festival, the entire community come together to offer prayers and thank deities for the prosperity. 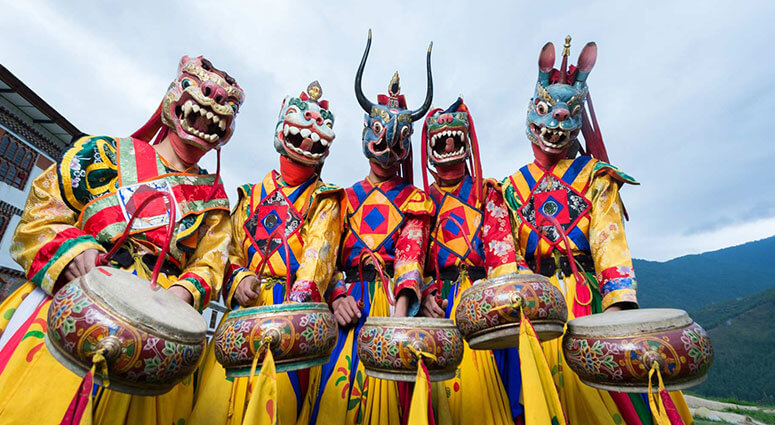 If you are planning a visit during your Bhutan festival tour, then Haa Summer Festival in Haa Valley is a must-see. Demonstrating a blend of cultural extravaganza and tranquility of nature, the festival is a celebration of the nomadic and traditional lifestyles of the people of Bhutan. A perfect destination for those who wish to experience the traditional Bhutanese culture. The festival exhibits the vibrant local culture, complemented with the local cuisine, sports, drinks, religious performances, dance and songs. With the picture-perfect Haaâ scenic landscape in the background, the festival is the ideal chance to capture the true essence of Bhutan and its scenic beauty. A treat for photographers, there is also a photography contest at the festival. 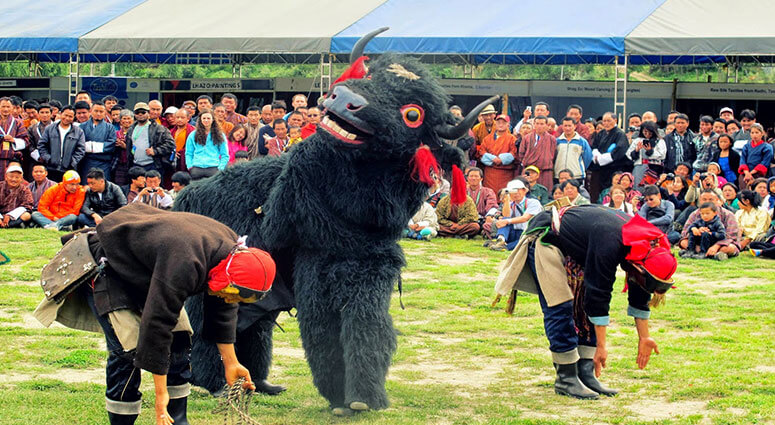 Celebrated in the lush green Merak Valley in the eastern Bhutan, the festival is a celebration of the local culture and traditions. During the course of the festival, the entire community come together to put up an exhibition of the exuberant local culture. The three-days festival offers an insight into the Brokpas community, bringing you closer to nature and its beauty. A community still thriving without using money, the homegrown and homemade culture of the Brokpas is on display during the festival. 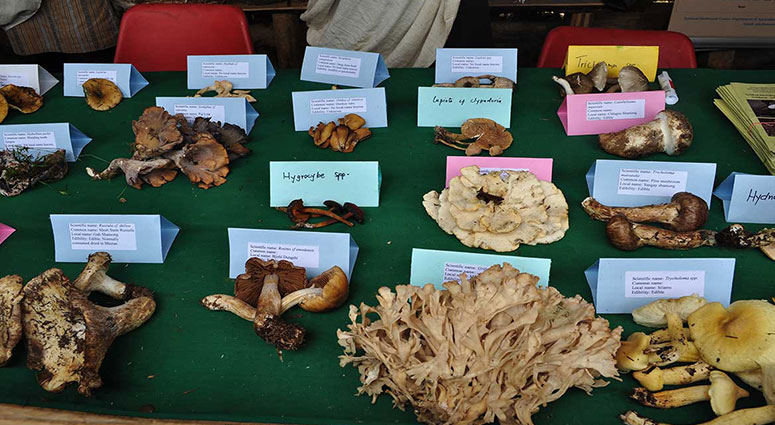 If you happen to be a foodie, this festival in Bhutan is a perfect choice for you. A cultural festival aimed at spreading awareness about the sustainable harvesting of the local mushrooms and promoting the organic harvesting. Exhibiting the indigenous mushrooms and many more organic food, Matsutake Festival is a feast for every visitor. Organised in the picturesque Ura Valley, the festival offers a perfect blend of lip-smacking local delicacies amidst the luxury of nature. You can also participate in the mushroom picking excursion and getting acquainted with the rural Bhutanese lifestyle.

Mushroom picking excursion is also a major attraction of this festival.

Bhutanese Cuisine: Add Spiciness to Your Trip to Bhutan 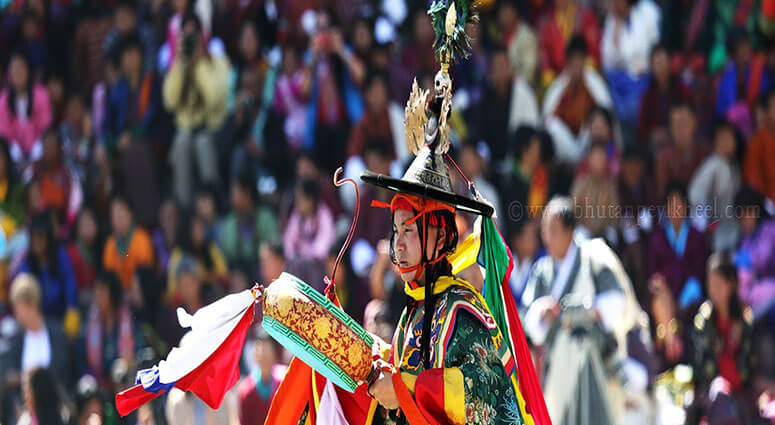 Wangdue Phodrang, the gateway of Eastern Bhutan, celebrates the annual festival of Wangdue Phodrang Tshechu with furore and great joy every year. Introduced by Zhabdrung Ngawang Namgyal, the festival has been celebrated since the 17th century. A religious and cultural festival known for local songs and ornamental speeches(Lozeys), it exhibits the vibrant culture and traditions with great pride. Also, celebrating the good deeds of Guru Rinpoche, the dance performed at the festivals aim to thank deities for their blessings. The Dance of Ox is a major tourist attraction of the festival which concludes with the unfurling of the Guru Tshengye Thongdrol. 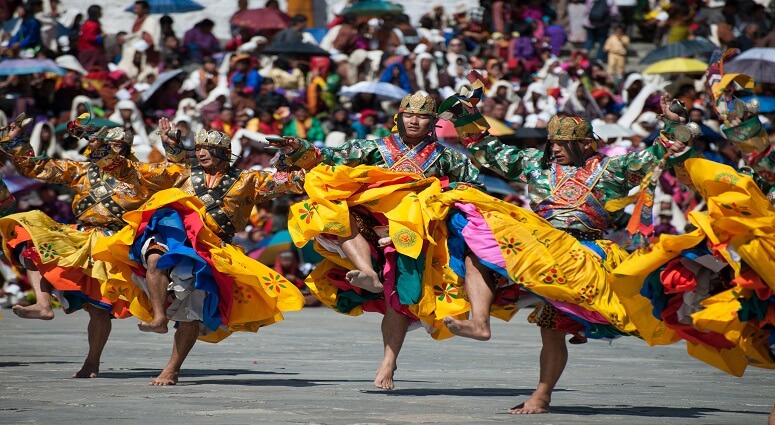 A 3-day cultural extravaganza exhibiting the vibrant culture and proud heritage of Bhutan, Thimphu Tshechu is a festival celebrated to commemorate the birth of Guru Rinpoche. The festival is celebrated in the capital of Bhutan, Thimphu on the 10th day of 8th month of Lunar Calendar. One of the most popular festivals of Bhutan, it is attended by locals from neighbouring districts. A religious festival, Thimphu Tshechu is marked by days and nights of prayers to invoke God. It is believed that by attending this festival, one gains merit points. Thimphu Tshechu festival celebrates the prosperity of the country and its citizens, and the rituals of the festivals aim to seek blessings of deities. 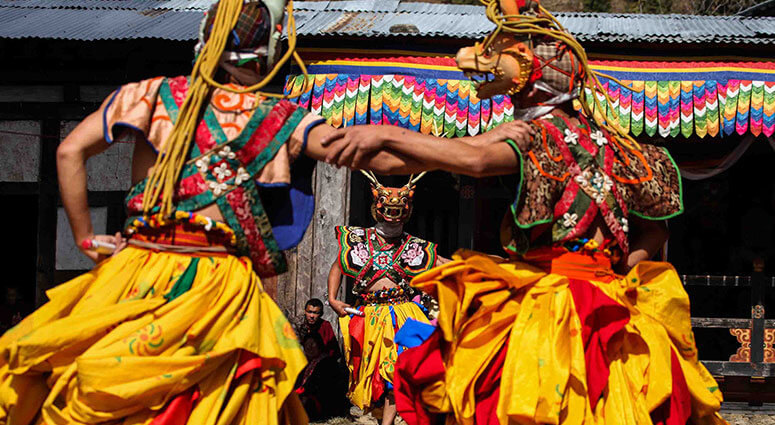 A must-see religious and cultural festival in the town of Bumthang, this 4-day festival is an exhibition of the rich culture and heritage of Bhutan. The festival is celebrated for two reasons – one being the celebration of the deeds of Guru Rinpoche and other being the celebration of the commemoration of the establishment of Jambay Lhakhang temple of the 7th century. It is marked by various dance rituals like the naked dance (tourists are not allowed to see it) and dancing under the fire being the most famous. Like many other religious festivals across Bhutan, Jambay Lhakhang Drup is also celebrated as a way to thank deities for bestowing the land with prosperity and happiness.

Information that can help you plan your trip to Bhutan with ease: 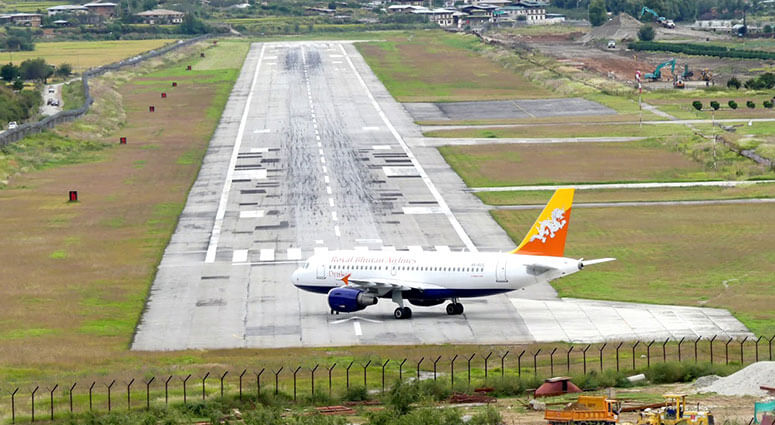 How to reach Bhutan:

You can enter Bhutan only through air or via land.

By air: There is only one international airport in Bhutan, which is in Paro. The flight to Paro is an adventure in itself. Only three airlines fly to and from Paro – Druk Air, Bhutan Airlines and Buddha Air. The airport is well-connected to major Indian cities like Delhi, Mumbai, Gaya, Kolkata.

By road: Entering to Bhutan via road is only possible through Indo-Bhutan borders. Entering via roads through China and Tibet is not allowed. The three land borders are Gelephu, Phuentsholing and Samdrup Jongkhar.

Bhutan has a diverse climate because of change in altitude and also because of the southwest and northeast monsoon from India. However, between September to November is the best time to visit Bhutan to witness the scenic beauty.

Spring: March to May
Monsoon: June to August
Autumn: September to November
Winter: December to February

Bhutan: The Ultimate Pilgrimage Destination in the Himalayas 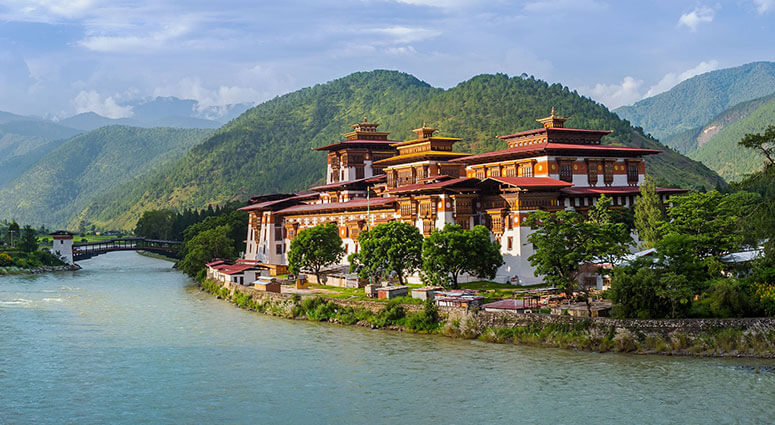 Countries other than SAARC

For more details on planning your Bhutan tour from India you can get detailed information here.

Bhutan is a land of breathtaking beauty and a culture that will leave you wanting for more. The rich heritage is a major plus point for the country that is fused with the enchanting landscape and rich culture. Bhutan is a destination that will give you the best of both the worlds. So, donât think much and plan your trip to Bhutan and experience the rich history and heritage of the country. Do share with us your experience.

Also, if youâre looking for such tours to Bhutan and donât want to plan it on your own, you can contact us at Tour My India. You can call us at +919212553175 or send us your queries at info@tourmyindia.com and weâll get back to you with Best Bhutan tourism holiday packages where you can pick the one that suits you the most.