Bhutan: The Ultimate Pilgrimage Destination in the Himalayas

Even the sky would blush if you ask it how much does it love this land that oozes out spirituality and peace. Every traveller reading this blog would be smiling at this thought, am I right or am I right? Now, if we start to think of the possible tourist places you can visit in this worldâs last Buddhist Kingdom on your vacation, the list can be endless. But why not leave all the other things aside and visit Bhutan for the one sole reason for which it is most popular, its spiritual inclination. This Buddhist Kingdom, which is the most pampered kid of the Himalayasâ eastern edge, is replete with temples, monasteries, dzongs(fortresses) all of which come with beguiling landscapes. Without wasting much time letâs go on a spiritual journey to Bhutan and traverse from one tourist attraction to another via this travel guide to attain solitude and to refresh our souls.

Taktsang Monastery: Enlighten your soul the way the great sage did in 8th century 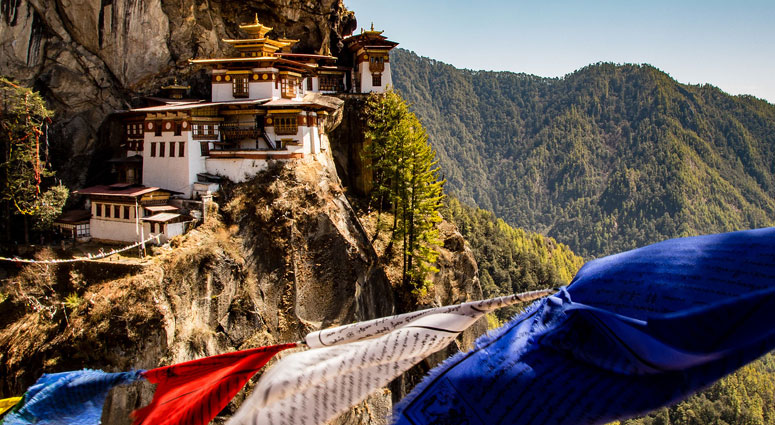 The best way to start your spiritual holidays in Bhutan is probably by visiting it’s famous Taktsang Palphug Monastery which is also famous by the name Tigerâs Nest, a sacred place of worship which finds its place in the cliff of the beautiful Paro Valley. It was in 1962 that Gyalse Tenzin Rabgye built this temple complex in Bhutan around the cave where the Divine sage Padmasambhava worshipped. Legend has it that the sage worshipped in the cave during the 8th century for three years, three months, three weeks, three days and three hours. Moreover, it is Padmasambhava who blessed Bhutan with Buddhism and hence is worshipped tirelessly by people across the globe.

Tashichho Dzong: Home to 30 shrines that are brimming with spirituality 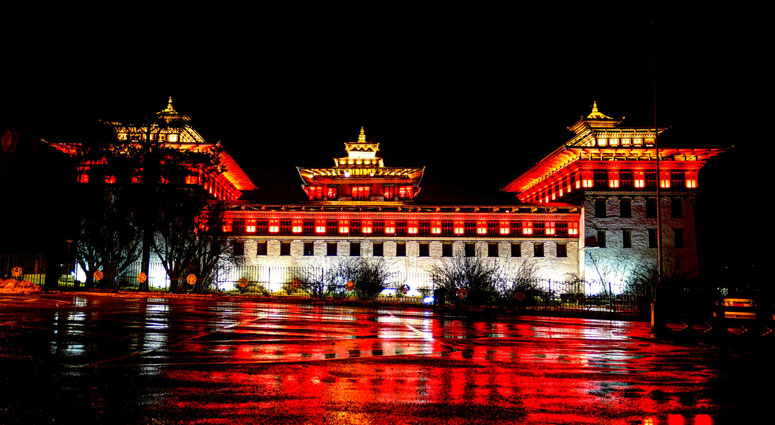 It was the thoughts of the first Dharma Raja who gave Thimpu this pristine monastery settled on the Western bank of Wang Chu. The Dzong has served as the seat of the Dharma Raja also revered as Druk Desi who bestowed Bhutan with it’s one of the important sects, the Lho-drukpa sect of Buddhism. Visiting Tashichho Dzong is one of the top things to do when in Bhutan where travellers by just being there feel a certain calmness taking over them. Apart from this the architecture of the Dzong is also worth applauding where the white two-storied building with three storied towers with golden roofs at every corner ooze out peace and are a personification of simplicity that lies here.

Punakha Dzong: A tourism place whose future was predicted by the divine sage Padmasambhava 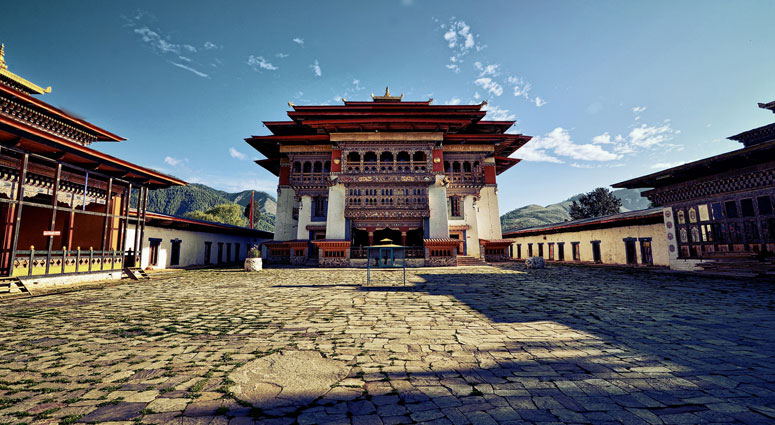 Nurtured at the conflux of Mo Chhu and Pho Chhu (rivers), is the second oldest and largest dzong in Bhutan, Punakha Dzong. Legend has it that the revered sage Padmasambhava foretold that âa person named Namgyal will arrive at a hill that looks like an elephant”. And much to anybody’s surprise it was Ngawang Namgyal, 1st Zhabdrung Rinpoche who came to Bhutan in 1637-38 and built the Dzong on the peak of the hill which resembled an elephant’s trunk. And ever since Punakha Dzong has been one of the must visit places in Bhutan. The Dzong is also known as Pungtang Dewa chhenbi Phodrang which means “the palace of great happiness or bliss”.

How to Plan a Perfect Bhutan Tour from India?

Chimi Lhakhang: Hear tales of a âMad Saintâ who had his own eccentric way of teaching Buddhism 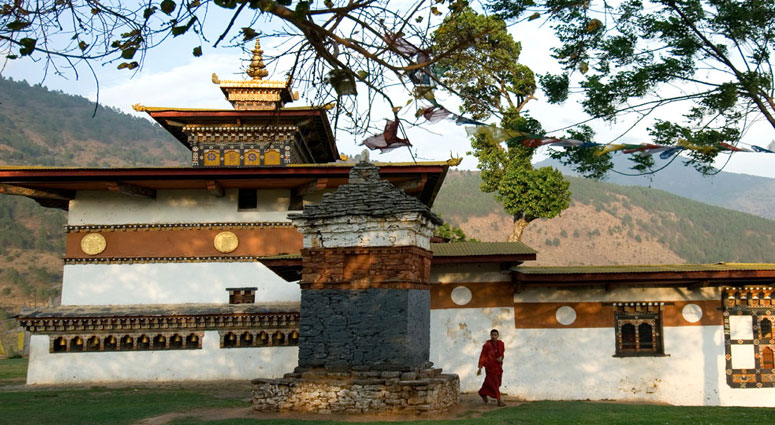 Now it’s time to head towards the Punakha District in your religious holidays as there lies another religious monastery of Bhutan, Chimi Lhakhang which is also known as Chime Lhakhang. The more rejuvenating this Fertility Temple might seem to you, the more interesting is the person you would find who constructed a chorten here. Known as the âDivine Madmanâ by some and âMad Saintâ by others, Drukpa Kunley was famous for his out-of-the-box way of teaching Buddhism where he used humour, singing and appalling behaviour with sexual overtones which mostly came out as a shocker for people. Later in the year 1499, Ngawang Chogyal who was the 14th Drukpa hierarch, built the the monastery around a hill near Lobesa. Travellers from round the globe come here to seek blessings for a child where their heads are tapped with a wang by the saint who is ordained with the âmagic thunderbolt of wisdomâ. Apart from this, couples travel all the way to Chimi Lhakhang to get a suitable name for their new born child by the lama.

Best Places to Visit in Bhutan on Your Family Holiday 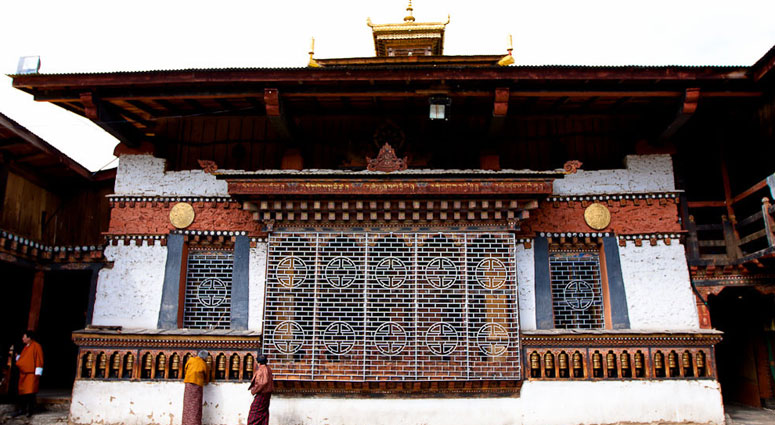 What’s particularly interesting about this temple in Thimphu is that parents come here to wish for the well-being of their young children and some come here to get the perfect name for their infant. It was back in 12th century that the site for this popular temple of Bhutan was chosen by Lama Phajo Drugom Zhigpo and what stands now on the ridge over Thimphu is this fine place of worship. Furthermore, the intricate architecture especially the murals of Changangkha Lhakhang is going to take you by awe.

Buddha Dordenma: Bow your head to the huge Buddha statue and 1,25,000 miniatures of the same 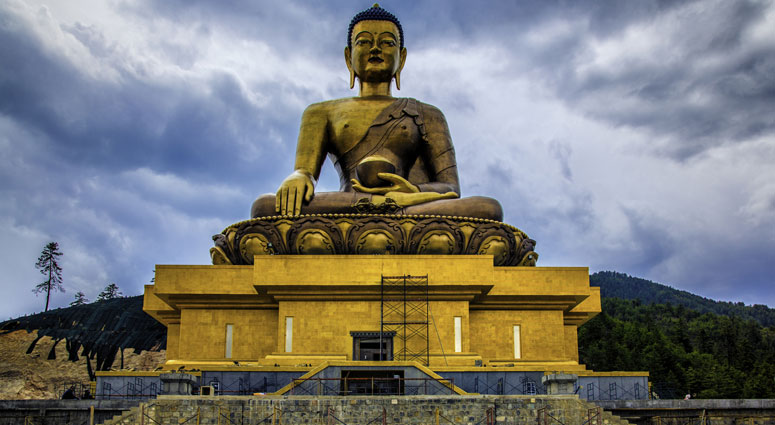 Back in the year 2015, this spiritual country got another reason to pull in pilgrims to its land as that’s when the Great Buddha Dordenma was built in Kuensel Phodrang, Thimphu. This huge Shakyamuni Buddha statue which is swarmed by tourists all-round the year was constructed to revere and celebrate the 60th birthday of the fourth king of Bhutan, Jigme Singye Wangchuck. The 51m sculpture was made in China and was brought in from Phuentsholing resting on a three-storey pedestal which houses a chapel along with 1,25,000 miniatures sculpted the same as the giant structure. The structures are carved out of bronze and took over 9 years in total for the completion. The way that leads to this statue crosses a Hindu temple and is renowned as a famous biking route.

Dechen Phodrang Monastery: An attraction which covers everything from museum to temple in its realms 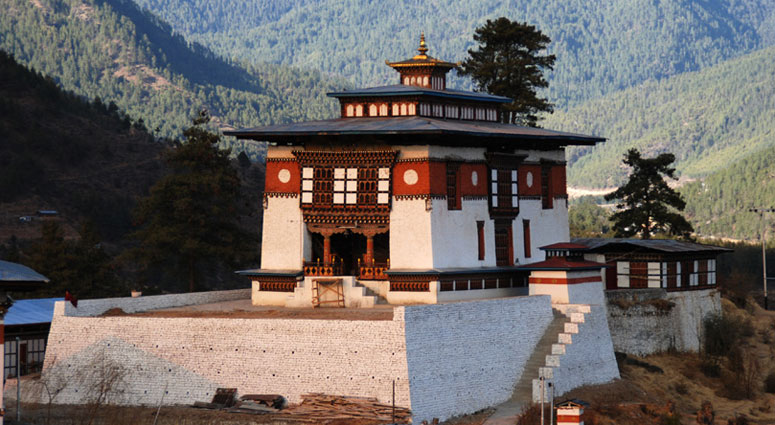 If you are close to the city of Thimphu, then a trip to this religious tourism attraction, Dechen Phodrang Monastery is a must see. Located towards the north side of the city, the monastery is known by the locals as the âPalace of Great Blissâ. From housing Bhutanese artifacts like the 12th century paintings of Ngawang Namgyal to being a monastic school, this popular Buddhist monastery has it all. The monastic school started in the year 1971 and offered students with an eight-year course. If we head back to the 12th century for a little peek inside the history, then we get to know that this monastery was the first fortress built in 1216 by Gyalwa Lhanapa, the founder of the Lhakpa School of Tibetan Buddhism. With the changing phases of time from being the protector of the Thimphu valley to being ruled by the Zhabdrung Ngawang Namgyel, the unifier of Bhutan, the dzong was revamped repeatedly till the time it was turned into this two-storey temple complex. The ground floor of the temple houses the monastic school, a goenkhang and a statue of the Buddha Shakyamuni whereas the first floor is home to a sculpture of Zhabdrung and the artifacts which are UNESCO recognized.

Gangtey Monastery: A popular centre of Buddhism and a meditation retreat in the Kingdom 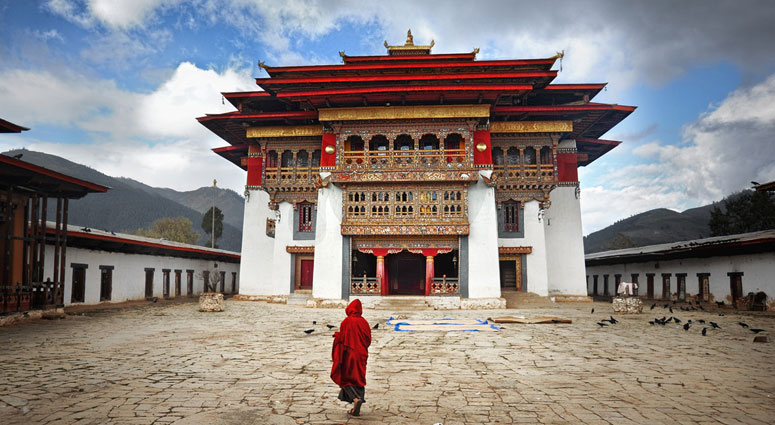 Let’s take a moment to appreciate this monastery which is counted among the major centres of the Nyingma school of Buddhism in Bhutan. Also known by the village settled close to it, Gangteng village, the Gangtey Monastery serves as the main seat of the Pema Lingpa tradition. If we look back in time, then itâs the 17th century that is linked to this famous monastery and takes us close to the prophecies made by the Bhutanese saint, Pema Lingpa towards the end of the 15th century. Talking about the complex, it includes monksâ quarters, a guest house, meditation centers and a central goemba. Moreover, the present day monastery was given a facelift during 2001 and 2008, a beetle larvae infestation being the prime reason.

20 Best Places to Visit and Things to Do in Bhutan

Rinpung Dzong: An all in one Dzong which wins praises for its intricate architecture 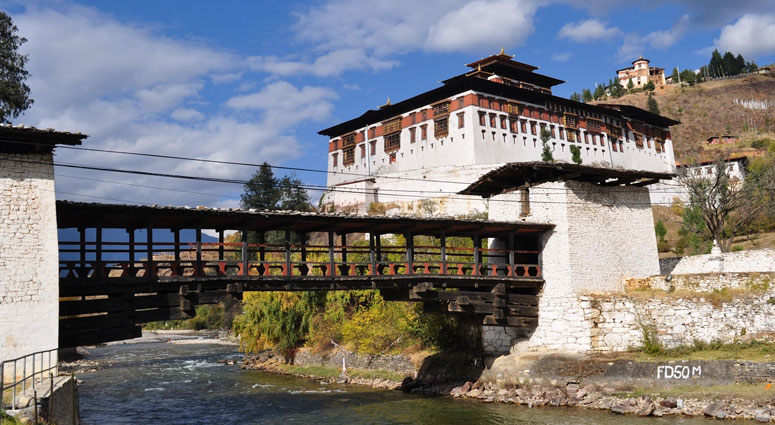 Adding charm to the land of Paro with its fine architecture is the Rinpung Dzong, a fortress, monastery and dzong in this South Asian tourist destination. Shabdrung Ngawang Namgyal was the name behind the consecration of this dzong where a smaller fort was located. What’s special about this dzong is its exceptional woodwork with wood beams slipped into each other and wait, there are no nails to keep them together, scary and cool! Besides, there is a huge Thangka (Buddhist painting) which is exhibited on the last day of the famous Paro Tsechu festival which was commissioned during the 18th century. The dzong is home to the government administrative offices of Paro Dzongkhag and the district monastic body.

Trashigang Dzong: Winsome setting and seeping spirituality is the key to winning hearts 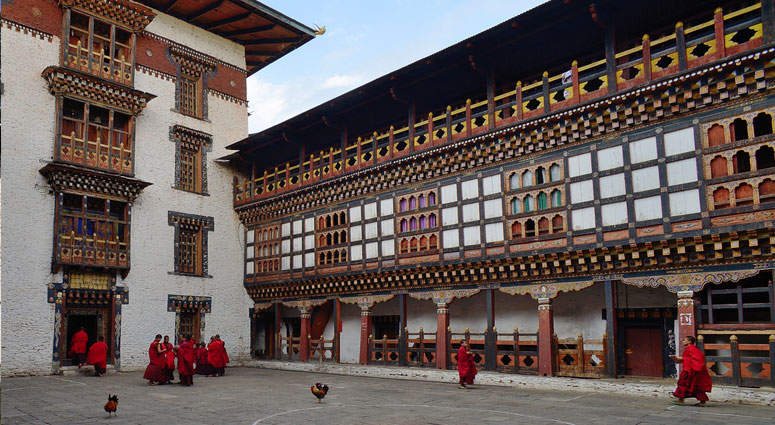 In the whole of Bhutan you won’t be able to find a spiritual retreat like the Trashigang Dzong, whose unmatched beauty has ever since been ruling over the heart of travellers seeking inner peace. It was in the year 1659 that the seed of construction of this dzong was sown in Trashigang town in the Trashigang Dzongkhag District of Bhutan. What might make you stay here a little longer is the mesmerising setting of this dzong as it is set up on a mountain ledge with the perfect view of Dangme Chu. Furthermore, it is counted among the largest dzong fortress in Bhutan and is the districtâs administrative seat.

Every corner of Bhutan reflects love for its travellers who are constantly in the search of peace and rejuvenation. And I hope this blog here even though via a spiritual tour tried to reach out to your wandering soul and made you decide that yes Bhutan is the place where you want to plan your next pilgrimage tour. So it’s time to bid goodbye, but wait if you really loved travelling with me, then do like and share this blog and give us a chance to plan your perfect Bhutan spiritual tour. Our Bhutan tour packages are tailored as per the preference of our customers and focus on giving only the best of everything. So contact us at +919212553175 or get in touch with us via mail by dropping in your queries at info@tourmyindia.com and our travel experts will get in touch with something awesome for you.