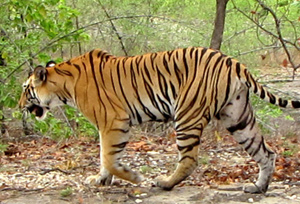 Nandankanan Zoological Park is located 20 kms ahead of the capital city Bhubaneswar in Orissa. By sprawling across dense and tranquil forests of Chandaka, Nandankanan serves the first captive gharial breeding center of India. The name that literally means the "Garden of Pleasure" is the most picturesque park to bring an opportunity to discover unique flora and fauna flourishing in their most natural habitat.

The Nandankanan Zoological Park is also known as Nandankanan National Park where arrays of enthralling facility like boating, white tiger and lion safaris (safari in a sense to encounter these royal animals) reptile park, aerial ropeway and cable car at the zoological park which is a nocturnal animal house established for the wildlife lovers to get a penchant for wildlife.

Established in 1960, the Nandankanan National park has an interesting history to tell the readers and the wildlife enthusiasts. Once a white female tiger passed by the area of Nandankanan and found a great enclosure with a local tiger and further stayed here only. This was one of the rarest scenes of the zoo area since no wild animals in the area was willing to stay in captivity. So, an idea of converting this zoo into a sophisticated tiger reserve was proposed by the National Geographical Magazine. The park thus came into existence and houses over 34 white tigers at present. Another beautiful feather was added to the plume of the park in 1980 when three white tiger cubs were born from normal colored parents.

Today this reserve area is being stretched across the area of 4.37 sq km where the protected area is of 3.62 sq km. Due to its rare offerings and serene setting, the park has been now emerged as a much sought after picnic destination for both locals as well as tourists. A joy ride in the toy train to observe the wildlife closely is an all time favorite activity for the tourists and especially the children visiting this park. 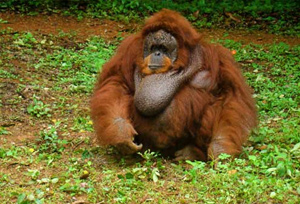 The Sunder Kanan Wild Sanctuary is actually a bastion of white tigers. Apart from Bandhavgarh National Park, the Sunder Kanan is the second home in India for the white magnificent creatures; although in Bandhavgarh today, there are only lesser counts are left. Today, Nandankanan Zoological Park has more than 34 white tigers in its vicinity. Besides, the park is also the home to 67 varieties of mammals, 18 varieties of reptiles and 81 species of birds. The animals that are frequently seen in the park are Asiatic lion, lion-tailed macaque, Indian crocodiles, nilgiri langur, Indian pangolin, Himalayan black bear, mouse deer, rhesus macaque, black buck and more. By spreading over a sprawling area of 4.4 Sq kms, the park also noticed as the first breeding place for black panthers.

Nandankanan Zoological Park boasts of a fascinating lake and wonderful lush green environs, which is a virtual paradise for birds inviting native as well as migratory birds. According to forest department, the park has around 75 bird species including some very rare species of birds. Some of the popular birds that can be seen here are white peacock, blue & yellow macaw, open billed stork, green winged macaw etc.

Nandankanan which is situated in the Chandaka forests, bears the lush green zoological park being spread in about 4 sq km of area, while the wildlife sanctuary is spread in around 5 sq km is also a home to various flourishing varieties of flora. The splendid environs of Chandaka forests and rippling waters of Kanjia Lake forms flora here. The area is densely greened with trees like Bija, Sal, Asana and Anala.

Dhauli (8 km from Nandankanan) : Dhauli Hills are historically very significant and are famous for the rock edits of Emperor Ashoka which can be found at its foothills. The area has also gained prominence due to the establishment of a Buddhist Peace Pagoda, popularly known as Shanti Stupa, built in the early seventies by the Japan Buddha Sangha and Kalinga Nippon Buddha Sangha. An old temple of Lord Dhavaleswar, reconstructed in 1972, is also being elevated on the hilltop of Dhauli.

Khandagiri and Udaygiri (8 km) : These are the twin hills of Kumargiri and contain varieties of rock-cut caves, built mainly for the Jain monks around 1st - 2nd century B.C. The thirteen years lithic records of Emperor Kharavela engraved in Hathigumpha (elephant cave) is a magnificent specimen of Pali records so far found in India.

Atri (42 km from Bhubaneshwar): Atri is a spot famous for the hot sulphur water spring and is also a holy place with the presence of the shrine of Hatakeswar in the temple. Apart from being a pleasant and spiritual experience, a bath in the spring water is believed to cure skin diseases.

Hirapur (15 km): Hirapur is the location where the 9th century hypethral temple of sixty four Yoginis can be found. It is second of its kind in Orissa and one of four such unique temples in India.

Nandankanan (20 km from Bhubaneswar): Picturesquely carved out of the Chandaka forest, Nandankanan is a Zoological Park where animals are kept in their natural habitat. A centrally located lake divides the Zoo from the Botanical Gardens. Tigers, Lions, Clouded Leopards, Black Panthers, European Brown Bear, Himalayan Black Bear, Gharials, Rosy Pelican, Grey Pelican, Indian Python, King Cobra, etc. are among the attractions of the zoo, which is famous for its White Tigers. The exotic Botanical Garden on the other side of the zoo preserves varieties of indigenous plants. Regular bus services are available to reach the sanctuary.

Nandankanan Botanical Garden - The Botanical Garden in the Nandankanan area was being established in the year 1963 at a distance of 18 kms from Bhubaneswar. The area is being wide stretched across 173 acres on the sylvan settings of a moist deciduous forest hemmed between two wetlands. The Botanical Garden is also being famed as one of the pioneering conservation and nature education Center of Orissa State, open to the public on all days, except Mondays. This is also a herbarium of authentic specimens, engaged in the collection, documentation and maintenance of indigenous & exotic plant species.

Chandaka Elephant Sanctuary - this elephant sanctuary is located on the Khurdha uplands of North-Eastern Ghats' biotic region and is extended all over the capital area of Orissa. Chandaka Forest is a relic of wild land spreading across an area of 193.39 sq km at the small sprawling hillocks of Khurdha and Cuttack districts. This is a wildlife sanctuary since August 1982 but was originally established as an inviolate shelter for the deteriorating elephants of the region. The sanctuary is a real treasure trove of biodiversity and is now a popular destination for the people seeking for eco-tourism and alienation.

Udayagiri and Khandagiri Caves - are partly natural and partly artificial caves of archaeological, historical and religious importance near the city of Bhubaneswar in Orissa. The caves are located on two hills Udayagiri and Khandagiri, mentioned as Kumari Parvat in Hathigumpha Inscription and face each other across the road. They have tremendous finely and ornately carved caves. It is believed that most of these caves were carved out with huge residential blocks for the Jain monks, during the reign of King Kharavela. Udayagiri meaning Sunrise Hill, has 18 caves while Khandagiri has 15 caves.

Safaris in Nandankanan National Park Safari at Nandankanan is a natural as well as artificial experience. Since the area is a zoo and not a typical national park, provision for Elephant or Jeep Safari is not available. Hence one has to make a foot walk in the region to catch the wildlife creatures in the jungle.

The visiting Hours of Nandankanan Zoological Park & Botanical Garden are:

Being located simply 20 kms from Bhubaneswar; Nandankanan can be reached easily from all modes of transportation. Some of the options that are readily available to the traveler are buses, cabs and auto rickshaws.

By Air : The nearest airport to Nandankanan is the Bhubaneswar airport which is at a distance of only 13 kilometers. Auto rickshaws are another option that is available to the traveler. Autos can be found outside both the airport and the railway station.

By Rail : The nearest railway station is the Bhubaneswar Railway Junction on the East-coast Railway station, which has super fast trains connecting all the major cities.

By Road : There are frequent buses that are also available from Bhubaneswar to the park. The Nandankanan is well connected to major cities of Orissa such as Bhubaneswar, Bhawanipatna, Nowrangpur, Bhawanipatna and many more.

The ideal time to visit this sanctuary is October-March. Open on all days except Mondays, the park opens up at 7.30 am and closes down at 6.00 pm during summer whereas the winter timings are from 8 am to 5 pm.