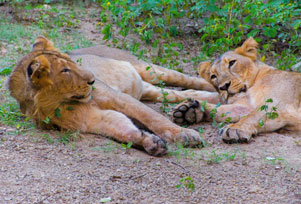 Gir, the royal kingdom of the Asiatic lions is the perfect dwelling place for most of the wildlife creatures and with the presence of great environs and topography thronging along this region, the area has really got its true importance. Also known as Sasan-Gir, or Gir forest, this is a forest and wildlife sanctuary in Gujarat, established in 1965. By covering the total area of 1412 sq km (about 258 sq km for the fully protected area (the national park) and 1153 km² for the Sanctuary), the park is placed at a distance of 65 km to the south-east of Junagadh and 60 km to south west of Amreli.

Asiatic Lion at Gir National ParkThe area of Gir National Park was once the hunting ground for the Britishers during their reign in India and while hunting these great numbers of tigers and lions accompanied by several Rajas and Maharajas of the region, it was considered as the matter of great pride. It was in the year 1899, the major counts of lions decreased sharply with the effect of famine and as a result Lord Curzon cancelled his trip in Gir which was scheduled for shooting upon invitation by the nawabs of the region. The effect of famine was so great that Lord Curzon even advised the residents of the area to save the remaining lions. By the time to save the more vulnerable acts like hunting and poaching, the Government of India banned the hunting process in the area in the year 1960 and today with an approachable count of increase in lions the area is only available for photo safaris. Today the park is recognized as one of the most important protected areas in Asia due to its supported species. Gir is accustomed of unique ecosystem with diverse flora and fauna and is now considered as one of the most important protected areas in Asia due to its unsupported species. The various initiatives and efforts by the Indian Government and the NGOs brought many changes in the population of the Asiatic lions in the year. Where in 2005, the count rose to 359 and again during the April 2010, the reserve witnessed a greater rise in the count to reach by 52 as compared to 2005 ratio. The lion breeding program included the park and its surrounding area has bred about 180 lions in its captivity since its inception.

The land of the Asiatic lion is the ideal reserve for the tremendous varieties of wild creatures to roam freely and safely. To make a royal journey towards the grand rugged hills of Sasan Gir, the wildlife lovers can get a fabulous opportunity to witness around 2,375 distinct fauna species of Gir to include around 38 species of mammals, 300 species of birds, 37 species of reptiles and more than 2,000 species of insects.

The main herbivores genres of the residents of Gir are Chital, Nilgai (or Blue bull), Antelope, Sambar, Four-horned Chinkara and Wild boar. Blackbucks from the surrounding area can be occasionally identified in the sanctuary.

The group of smaller mammals will also include Porcupine and Hare where Pangolin is rare in Gir sanctuary. The reptiles are represented by the Marsh crocodile hir Tortoise and the Monitor Lizard in the water areas of the sanctuary. Snakes and Pythons too can be found in the lush bushes and along the streams. Being adopted under the Indian Crocodile Conservation Project in 1977, the Gujarat State Forest Department has used the reserve area where the area is also flourished with more than 300 species of birds. The scavenger group of birds has 6 recorded species of Vultures. Some of the typical species of Gir include Crested Serpent Eagle, Brown Fish Owl, Crested Hawk-eagle, endangered Bonelli's Eagle, Rock Bush-Quail, Indian Eagle-Owl, Black-headed Oriole, Pygmy Woodpecker, Crested Treeswift and Indian Pitta.

In Gir, most of the area is comprised of rugged hills, with high ridges and densely forested valleys, wide grassland plateaus, and isolated hilltops. Around half of the forested area of the park is being stuffed with teak forest, with other floral varieties like khair, dhavdo, timru, amla, and many others. The other half is non-teak forest, with samai, simal, khakhro and asundro jambu, umro, amli, vad and kalam; mostly broadleaf and evergreen trees. The river Hiran is the only one to flow year-round; with rest of the inflows being seasonal. There are also areas of the park with open scrub and savannah-type of grassland.

To have a fantastic safari experience at Sasan Gir, the privilege of jeep safari with an assistance of a guide is beneficial. The Gir Forest Department also organizes "Lion Shows" for much fun. They make sure that you can see the lions at close range so they send trackers early morning on a mission to the located places and tempt them with live baits.

Kamleshwar Dam : This is the most requisite dam in the area being built over the Hiran River. Located inside the vicinity of Gir National Park, the Kamleshwar Dam actually serves as a lifeline of the reserve area where the tourists can find great varieties of marsh crocodiles.

Tulsi Shyam Temple : This is a famous temple in the area dedicated to Lord Krishna. People make a sure shot visit to this temple where major hot springs near to the temple are the other major attraction.

Somnath Temple : Somnath - this is one of the holy shrines of Lord Shiva being considered as one of the 12 jyotirlingas and is an important pilgrimage for Hindus where its riches were ransacked by invaders. The Prabhas Patan Museum has interesting architectural fragments and sculptures from the ruined temples. Somnath also has Lord Krishna's cenotaph and bathing ghats at Triveni Tirth, a medieval Sun Temple, the historic Ahilya Temple, Bakhla Tirth where Krishna is said to have met his end, and a cave temple.

Dwarka : At the distance of 225 kms from the reserve, Dwarka is one of the Char-dham yatras (four holy abodes) and one of the seven holiest cities of Hinduism. Dwarka has an important Krishna Temple, an attractive 12th-13th century Rukmani Temple, Sankracharya's Math and the Nageshwar Jyotirlinga as its major attraction.

Veraval : 36 kms from the sanctuary, this is a fishing port of Veraval, known for its dhow-building yard where massive hand-built seaworthy vessels are made. This was once a port of the Nawab of Junagadh that holds old gates and historic buildings.

Jetpur : Jetpur is 90 kms from the reserve area and is known as textile town being famous for its block and screen printing workshops and is an ideal place for shopping.

Girnar : Girnar at 60 kms from Sasan Gir is a 3660-ft long hill that rises on the outskirts of Junagadh with temples on ridges and on the summit. The presence of 12th century Jain Temples at its heights are the major attraction of the location, being studded with exquisite carvings.

Diu Island : Diu Island at 95 kms was once ruled by the Portuguese and is now a Union Territory. The island is popularly known as a beach destination with the presence of a 16th century Portuguese Fort, the impressive St Paul's Church, Diu Museum and old houses. Flamingos, storks and waders can also be seen at the creeks of Diu.

Travel Information: How to Reach There?

By Rail : One can travel by rail to Junagadh from Ahmadabad or Rajkot and then take a 65 km road trip on bus or taxi to Sasan Gir.

By Road : Gir National Park is 60 km from Junagadh, the most common base for making a visit, and 360 kms away from Ahmadabad. The main centre is at Sasan Gir, and has a forest guest house maintained by the park, just opposite the railway station.

For the best accommodation facility at the Sasan Gir Reserve area many impressive lodges and resorts are available to make the wildlife journey more explicit. These lodges are credited with salubrious facilities and services to make your wildlife tour enjoyable and memorable. Find the best names to make a perfect choice during your visit to Gir National Park.