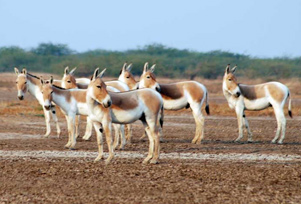 Located in an area called Little Run of Kutch, the Wild Ass Sanctuary in Kutch is the only home to wild ass in India. The sanctuary was set up in 1973 with a purpose to protect the endangered Indian wild ass. Sprawling over an area of 5000 square kilometers of the Little Rann and covering a minor portion of the cities like Sundernagar, Rajkot, Patan, Banaskantha and Kutch district, the wild ass sanctuary is the largest wildlife sanctuary in Gujarat. Indian Wild Ass (Equus hemionus khur), commonly known as the ghudkhar, still exists in this sanctuary. Akin to the Tibetan kiang, the ghudkhar are distinguished by a dark stripe along its back. Known for its speed, the wild ass lives in herds led by stallions and survived by migrating between the grassy 'bets' through the season, in search of food. There are around 3000 wild asses in the sanctuary and can be best seen in and around October and November. 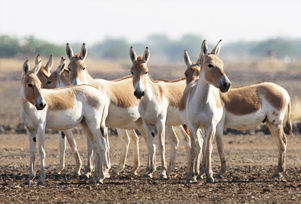 Other than the wild ass, the sanctuary is home to 32 other type of mammals including chinkara(Indian gazelle), two types of Desert Fox (Indian and White-footed), Jackals, Caracals, Nilgais (the largest antelope of Asia), Indian Wolves, Blackbucks, and Striped Hyenas. Every year, the Wild Ass Sanctuary attracts 75000 birds, including some migratory birds as well. The sanctuary is also refugee to some migratory birds like Sandgrouses, Desert Wheatears, Ten Species of Lark, the White-Browed Bulbul, Indian Coursers, Stoneplovers, Shrikes, Ducks, Geese, Ibis, Spoonbills, Godwits, Stints, Sandpipers, Shanks, Moorhens, Saras Cranes, both Indian Flamingoes, and Pelicans. The sanctuary also houses 93 species of invertebrates, including species like crustaceans, insects, molluscs, spiders, annelids and zooplanktons.

Also, the sanctuary is home to a sizeable population of Rabari and Bharwad tribes. To experience the best of the wildlife sanctuary, one should go for a jeep safari tour. It is to be noted that the Wild Ass Sanctuary has one of the largest salt pans in India. Tourists who are visiting the sanctuary can book their stay in the resorts and hotels nearby the sanctuary. Day safari from Dhrandadhra, Zainabad and Dasada are provided by the resort. Wild Ass Sanctuary is no less than an empyrean for the tourists, needless to say- of all kinds!

By Roadways: The Wild Ass Sanctuary is 130 km from Ahmedabad, 45 km from Viramgam, 175 km from Rajkot and 265 km from Bhuj. The sanctuary is accessible through Gujarat Tourism buses.

Best Time to Visit: November to December & January to March