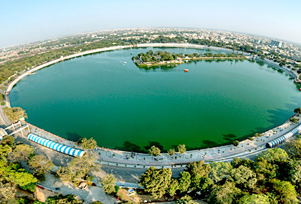 The state of Gujarat is blessed with nature's bounty. From scenic waterfalls to misty clouds to green forest, here one can discover the concealed secrets of nature. The best gift of nature to Gujarat is its lakes that add life to the state. Not only these are the splendours of nature, some of them even serve as a relaxing picnic spot for dwellers while, for others it holds religious significance and sentiments. Also, some of these lakes are the hotspots for the migratory birds and making the travelling experience exquisite.

In the context of religious significance, Gomti Lake, Narayan Sarovar Lake, Sahasralinga Talav and Pampa Lake are known lakes in Gujarat. Narayan Sarovar Lake is amongst the five holy lakes of Hinduism, along with Mansarovar in Tibet, Pampa in Karnataka, Bhuvaneshwar in Orissa and Pushkar in Rajasthan. Gomti Lake also fits best in sacred lake category as it was carved out by Sri Krishna for the betterment of local dwellers. A small number of lakes including names like "Gaurishankar Lake and Victoria Forest, Lakhota Talav and Ranmal Lake in Gujarat are known as outstanding paradises for birds watchers. Some of the add life to the people as they are the source of drinking water.

If tourists are a passionate traveller and enjoy nature, visiting some of the lakes of Gujarat can be an extraordinary and a once in a lifetime experience. People who are looking for serenity or just want to make a splash should visit the famous lakes of Gujarat.