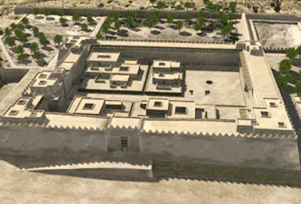 Rustic, beautiful and charming, Dholavira is a popular weekend gateways in Gujarat for people seeking peace and thrill. With such unique geographic location, Dhelovira is a paradise on the earth.

Located 250 km away from the Bhuj district, near Khadir bet in the great Rann of Kutch of Gujarat, Dholavira is an ancient town that contains the fascinating and historic ruins of the Indus Valley Civilization. Locally called Kotada timba, the site is the second largest Harappan site in India and fifth largest in Indian sub-continent. Amongst the Harappan sites discovered so far, Dholavira is the only place that marks the presence of Harappan culture from 2900 BC to 1500 BC. 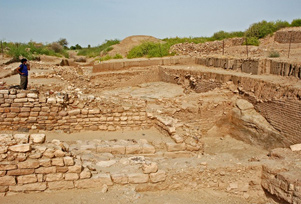 Lying on Khadir Island in the Rann of Kutch, Dhalovira covers an area of about 100 hectares. The ancient settlement is embraced by two monsoon channels, namely, the Manhar and Mansar. Dholavira reveals evidence of a remarkable planned city with broad roads, containing a central citadel (where the rulers or high officials stayed), a middle town with a spacious dwelling, a lower town with markets. Somewhere like other Indus Valley civilization town, Dholavira fortification was also in the form of a parallelogram. Archeologist even believes that the five-thousand-year-old town must have been a lovely city of lakes during the heyday. In fact, the residents of Dholavira had settled the town between two water streams, Manhar and Mansar, collecting their water in monsoon and using it for rest of the year.

Made of sun-dried mud bricks and stone, buildings in the region still stand in good condition. With such amazing architecture, one can figure out that good civil engineers were appointed to make the town. The city was also an important trading point as here one can see the presence of large reservoirs and a dam reflecting the existence of a sophisticated system of water harvesting. In fact, as per some news release in 2014, 5,000-year-old stepwell has been found in Dholavira, which is three times bigger than the Great Bath at Mohenjo Daro. 73.4m long, 29.3m wide, and 10m deep, the reservoir represents largest, grandest, and the best furnished ancient reservoirs discovered so far in the country.

The city seems important during the Indus Valley days as excavations have found evidence of seven layers, indicating as many settlements over a period of 1500 years. Archaeologists have identified seven different stages in the city design. The most interesting aspect of Dholavira is the inscriptions, mainly, ten large signs that are the first evidence of the written language.

What attracts the attention of the people to Dholavera is that the place provides insight into the pioneering Harappan mind, with the world's best water conservation system, first sign boards, and ancient Indus scripts. In the year 1967, people of the Archaeological Survey of India (ASI) unearthed the area. Artefacts include terracotta pottery, beads, gold and copper ornaments, seals, fish hooks, animal figurines, tools, urns, and vessels that indicate trade links with lands were also dug out from this place. All these items and article are now displayed in the museum, which is located at the entrance of the city.

Best Time to Visit: October to December & January to March

By Railways: Bhuj Railway Station is the nearest railway station

By Airways: Rudra Mata Airport in Bhuj is the nearest airport

By Roadways: Dholavira is 250 km away from Bhuj and is rechaed via Bhachau and Rapar. One can reach Dholavira from Bhuj by hopping in a private taxi or state tourism buses.

Note: No accommodation options are available in Dholavira, and one will have to book a stay in Gandhidham and Bhuj.