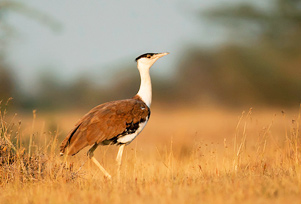 By the law of probability, one has the best possibility and chances of spotting India's heaviest bird, great Indian bustard, at the extensive grasslands of Kutch. Also known as the Lala-Parijan sanctuary; it was declared a sanctuary in July 1992 to safeguard the Great Indian Bustard. Tourists who visit the Kutch Bustard Sanctuary get bowled over by the exquisiteness of nature. Sprawling over an area of 2 square kilometres, the sanctuary is the second largest conservator of the Indian Bustard, the largest being Desert National Park in the neighbouring state of Rajasthan. Other than the Great Indian Bustard, birds that are found flying around the sanctuary are McQueen's Bustard, Lesser Florican, Stoliczkas, Bushchats, Merlins. Varied vegetation, semi-arid grasslands and marshy swamps make Kutch Bustard Sanctuary an ideal home for Great Indian Bustard. 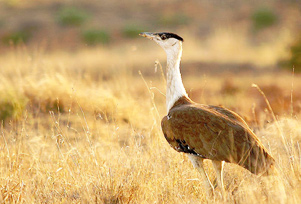