Hindu temples of Gujarat are resplendent creations. These temples represent living cultures of the state that were originated thousands of years ago. They are the places where gods and divinities are believed to have descended, opening doors of the tirtha, so that pilgrims might ascend in their rites and prayers.

With the course of time, Hindu practices and cultures have evolved even in Gujarat. For Hindu pilgrimages, Gujarat is the abode of God, a place where Lord Rama spent some time during his 14 years of exile, the land which was the kingdom of Lord Krishna and the first place where Jyotirlinga of Lord Shiva was positioned for the first time. Also, there are many sacred sites, including Shaktipeetha temples. These temples are highly auspicious as they are believed to be the spiritual threshold where heaven and earth means. 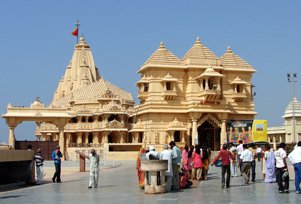 The creator, the destroyer, the transformer, Bholanath, there are many names of Lord Shiva and so are are the temples in Gujarat. There are many Shiva temples in Gujarat, each one of them has a different story to tell. Gujarat is home to the two of the 12 most famous Shiva temples in India, which are considered to be Jyotirlingas of Lord Shiva. In fact, Somnath temple in Gujarat is one of the 12 jyotirlingas. Nageshwar in Dwarka claims to be the first Jyotirlinga on earth. Locals say that the Jyotirlinga has a purifying effect and protects devotees from all the poisons. Some of these temples were built by former kings and was rebuilt again in their distinctive form every time it was built. Other then the Jyotirlinga, there are many other Shiva Temples in Gujarat that are thronged by tourists. 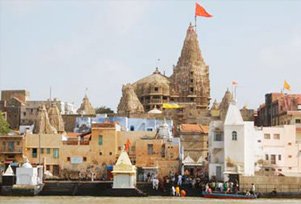 Krishna, the enigmatic avatar of Lord Vishnu, is a supreme lord in the realms of India and abroad. The eternal God, who in Gujarat is also known as the Dwarkadheesh, choose Dwarka (a city in Gujarat) as his kingdom. Locals even say that Lord Krishna used to control the administration of Dwarka while residing in his family in Bet Dwarka. Additionally, Dwarkadeesh is an integral part of Char Dham travel circuit. Since the state has an intimate connection with the great Lord, there is a good count of Krishna temple in Gujarat.

There are many Lord Krishna temples in India: either big or small. Most significant numbers are seen in Gujarat. Take a step further to know more about Lord Krishna by going for a spiritual trip to Gujarat. See below for the list of Krishna Temples in Gujarat. 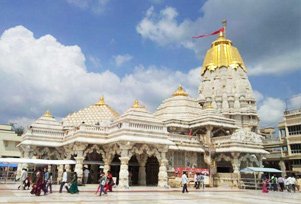 Gujarat, the land of saints, is a popular Hindu pilgrimage destination in India. The divine famine power is worshipped gracefully in every part of Gujarat, especially during the Navratri. During the Navratri festival, feminine divinity in the forms of the goddesses Durga, Lakshmi and Saraswati are worshipped. To signify the power of goddess Durga, there are many temples built in and around the Gujarat which are connected inseparably to the incidents of Mata ji. Each of these temples is thronged by devotees all through the year. Kali Mandir in Prabhas and Ambaji Temple in Banaskantha are the highly revered Shakti Peetha Temples in India. Visit the Durga Temples that are believed to be of great value and significance. 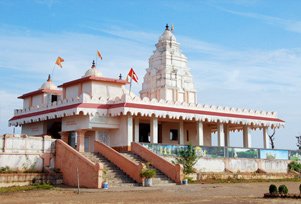 Rama was born from the divine elixir that the king obtained from a sacrificial fire. 'The Ramayana' elucidates his love for Sita, his sacrifices and dedication to win the war against Ravana. The purity of thoughts and devotion underlines the legend of Rama, and this is carried forth in the worship of Lord Rama even to this day. Rama held a strong connection with the jungles of Gujarat. Locals even say that 'The Dangs' was the place where Rama and Lakshman meet Lord Hanuman and King Sugreeva while they were searching for Goddess Sita. Anjana Kund is yet another noteworthy place to visit in Gujarat. According to popular belief, Anjana Kund was the place where Lord Hanuman was born. Anajana, the mother of Lord Hanuman, have lived in the remote caves in the mountains around Anjana Kund for bathing. Also in Gujarat is the Shabri Dham, the place where Rama and Lakshman, on their quest for Sita, meet Shabri, a tribal devotee. There are many Rama temples in Gujarat that are believed to be more than just centres for offering prayer; in fact these are places where one can learn about culture and values.

Embark on a spiritual tour to Gujarat to find everlasting happiness of body, mind and soul. Some even say that journey to these Hindu temples of Gujarat is a lifetime achievement that endows pilgrimage with peace of mind and mental strength.