Fascinating archaeological sites, superb Hindu architecture and exquisite handicrafts, are amongst the Anjar's attractions. With nearly 1,400 years of history, founded around 650 AD, Anjar is claimed to be the oldest town in Kutch. Many earthquakes have devastated the region of Anjar, but the legendary capacity to overcome hardship and disaster, the people lost no time in rebuilding their lives out of the debris around them. It's impossible to come to Anjar and return home empty handed as the markets of the city offers an exciting range of metal handicrafts. Different communities gather in the town to celebrate the Jesai-Toral fair. The festival is celebrated in the memory of the famous couple Jesai and Toral, together they have served the people of Kutch region. 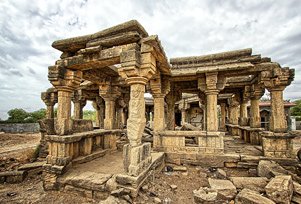 Following are the places that one can see on a trip to Anjar:

By Roadways: One can easily get buses and private taxis from neighbouring towns to reach Anjar.

By Railways: Anjar Railway Station is well connected with the neighbouring towns like Bhuj, Ahmedabad and Gandhidham

By Airways: Rudra Mata Airport (BHJ) in Bhuj is the nearest airport