The Impact of Global Warming on Bengal Tigers in Sundarbans Delta

Have you ever thought about the consequences of your smallest actions? Have you ever stopped to think what impact will global warming bring on other species of living beings out there? Well, we have bad news for you. With the increase in global temperature leading to the melting of glaciers and sea ice, the sea level is bound to increase. The first victims of this would be the cities and habitation close to a water body. Entire cities would be submerged in the water and with that, we will lose a big chunk of living beings.

The reason we are discussing this fairly popular topic is that when the sea level rises to a dangerous level, which is bound to happen unless we change our approach, we will lose many wildlife species, including Bengal tigers in Sundarbans.

The Sundarbans is a mangrove area in the delta formed by the confluence of Ganges, Brahmaputra and Meghna Rivers in the Bay of Bengal. It is home to the exotic Bengal Tigers. With less than 2500 individuals by the year 2011, they have been under special care and protection, in an attempt to increase the total population of the exotic species. Sundarbans which spreads across India and Bangladesh both has a total population of around 200 tigers. The count of Indian side is believed to be 86 while the total number in Bangladesh Sundarbans is believed to be between 83 and 130.

The study and its predictions

Recently a study was published in Science of the Total Environment journal under the title âCombined effects of climate change and sea-level rise project dramatic habitat loss of the globally endangered Bengal tiger in the Bangladesh Sundarbansâ. As the title suggests, the study discussed the effects of global warming on the existing Bengal Tiger population in the Sundarbans Delta across India and Bangladesh.

The study suggested that by the year 2070, the entire Tiger population in Sundarbans would be wiped out because of the rising sea level. The study also concluded that by the year 2050, Ceriops decandra-dominated mangrove would be the only remaining refuge for the Tigers in Sundarbans. Sharif A. Mukul who is a correspondent author of the study said that this is a warning bell and we need to be in the execution phase of transboundary measures in conservation. He also added that if we donât care for the habitat and survival of the Bengal Tigers in Sundarbans, we would witness a rapid decline of the tiger population here before eventually being wiped out by 2070.

What would be the cause of the wipeout?

Sundarbans spans over 10,000 sq kilometres and this is the biggest mangroves in the world, sharing 60% territory with Bangladesh and the remaining 40% with India. With more than 200 Tigers, Sundarbans is a prime place for tiger conservation policies.

Mukul who is an assistant professor at Independent University, Bangladesh said that the climate change will have a bigger impact on the Bengal Tiger population than the rising sea level alone, which was believed to be a greater threat than global warming.

Mukul explained that the study categorised the rising sea level as a consequence of global warming. The researchers have placed both the reasons separately. The researchers also tried to identify the places which were tiger hotspots in Sundarbans.

This is the region along the India-Bangladesh borders in the Sundarbans. It is also the site for Bangladeshâs Sundarbans West Wildlife Sanctuary. 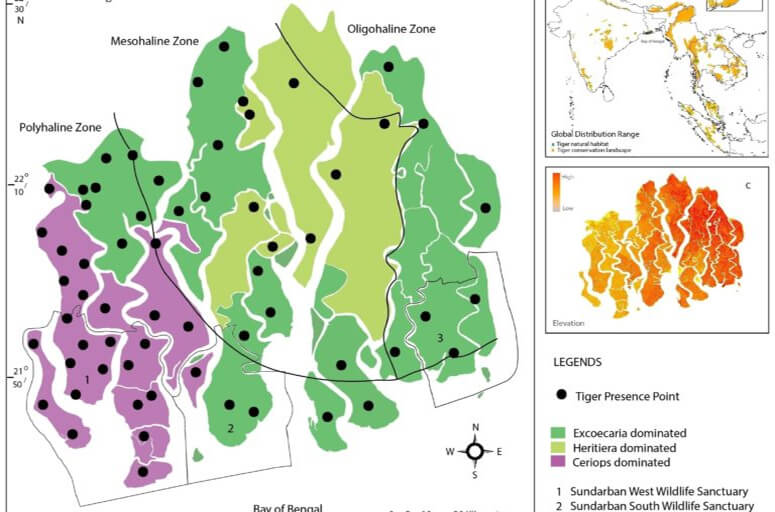 Mukul says that this might be the case because of the dominance of Ceriops decandra which thrives in regions with high salinity. These areas are always far away from human intervention.

Facts to Know about Global Warming That will Surprise You

Figuring out the threat of climate change

With the global temperature rising, there would be a change in climate and weather cycle. There would be a visible vegetation change and change in the flora. It would be followed by erratic weather pattern and rising sea level. The climate change in India and Bangladesh would follow the same path and effects would be almost similar. The mangrove would be the unifying factor between both nations.

Mukul further added that India and Bangladesh Sundarbans both share somewhat similar environmental and socio-economic settings. Interestingly there hasnât been much illegal logging or forest loss on both sides. Apart from the poaching and human-tiger conflicts, the fate of the Bengal Tigers would be somewhat similar on either side of the Sundarbans. This is important for both the countries to realise that transborder conservation policies are the best way to preserve the existing Tiger population in Sundarbans.

Y.V Jhala who is a scientist at Wildlife Institute of India noted that the results of the simulation model may vary depending upon the parameters but the threat is imminent and real.

Using two greenhouse gas concentration scenarios (RCP6.0 and RCP8.5) which was developed by the Intergovernmental Panel on climate change, the researchers simulated the accessibility and suitability of the low-lying Sundarbans areas. 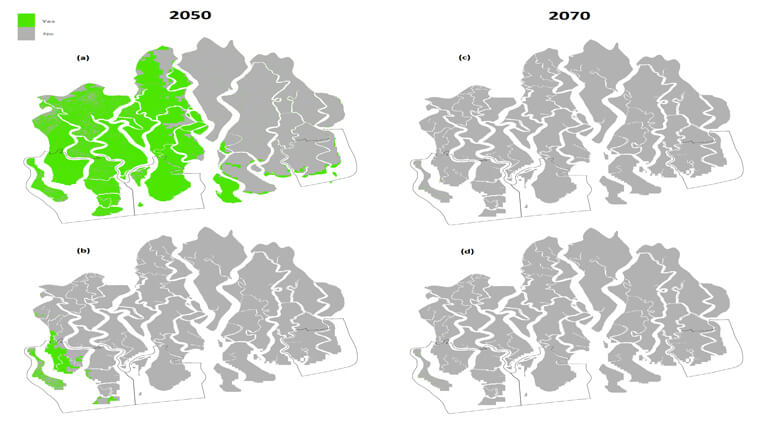 The analysis done in the research includes external factors such as erratic weather events and the rise in sea levels. While discussing the research Mukul said that they used the occupancy data of the tigers based upon their pugmarks, which are unique for every individual. Using this, they traced the future distribution of tigers in the Sundarbans across Bangladesh.

Whatever scenario is played out, in any case, one thing which is common is that the tiger population in Sundarbans would be reduced and limited to a small area by 2050. This simulation doesnât account for additional factors like disease outbreak or cases of poaching or lack of prey in their natural habitat.

How the Climate Change Affects the Life of Wildlife?

Sundarban: An irreplaceable heaven on Earth

Created as a tiger reserve in 1973, Sundarban was constituted as a Reserve Forest in 1978. In India, Sundarbans is spread over the district of North 24 Parganas and South 24 Parganas. Covering an area of roughly 4,200 sq km of the reserve forest and a total of 5,400 sq km of non-forested area. Over the years, there have been 28% increase in the core area as well as buffer area was also increased. However, things havenât been all happy merry as this increase in the buffer zone has left the fishing area within a very small region.

Professor Bill Laurance who was a co-author of the study and who is a professor at James Cook University in Australia emphasised on the importance of Sundarbans, during a press release. He added that the more of the Sundarbans that we conserve the more resilient Sundarbans would be to future climatic extremes and rising sea levels.

He also added that there is no other place like Sundarbans and we have to look after it and care for this iconic and unique ecosystem if we wish to preserve endangered species like Bengal Tigers.