Hereâs some mind-boggling numbers for you. According to a report released by TRAFFIC, an international non-profit working on trade in wild animals and plants, an average of 124 tigers were killed each year between 2000 and 2018 in Asia. Those certainly are figures which call our attention. Even though India may have succeeded in increasing the tiger population and conserving their habitats, the numbers tell us that more needs to be done in the fight against poachers and tiger conservation.

Some data on tiger seizures

The report, which is titled, “Skin and Bones unresolved”: An analysis of Tiger seizures from 2000-2018â, says that in a period of 18 years, the body parts of 2,359 tigers were recovered from across 32 countries and territories around the world. It is intriguing to know that out of the 1,142 seizure incidents reported worldwide, Asia, which is home to the largest tiger population, witnessed a total of 1,086 seizures. These seizures were carried out across the 13 Asian tiger range countries, which account for 2,241 tigers. The report went on to say that 60 cases of seizure were recorded in a year. Countries with the highest tiger deaths in Asia are India, China and Indonesia. While most of the body parts seized were those of tigers, they also included other animals like bears and elephants.

40% of the total seized parts consisted of Tiger skin, which is in high demand in China for high end luxury decor. According to the report, almost 58 tigers are poached for their skins every year. 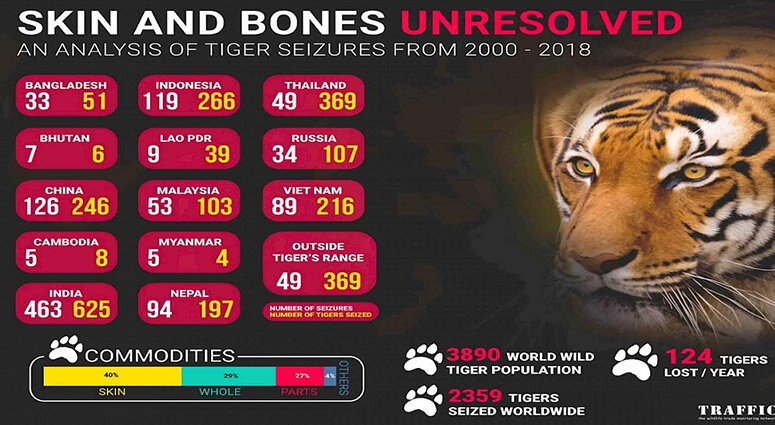 There has been a significant rise in the seizures of whole animals, both dead and alive, since 2016. A look at the data more closely reveals that of late, there has been a marked increase in seizures of animals. Although 798 animals were seized over a period of 18 years, the proportion of animals seized between 2016-2018 ranged from 44% to 73%.

The report goes on to add that at least 1,167 people were arrested in 591 cases. More than 38% of the arrests took place in India. Indonesia and China occupied the second and third places respectively.

Why are the seizure rates highest in India?

Some experts are of the opinion that the high seizure rates in India can be attributed to the high population of tigers. Tito Joseph, a member of the nonprofit Wildlife Protection Society in India, says, âWe have such a good population of tigers in India, more than any other country. So, it is natural that poachers have an eye on the tigers hereâ. He goes on to say, âOver the years, especially in the last one-and-a-half decades, the governmentâs efforts at tiger conservation have also increased and with the setting up of the Wildlife Crime Control Bureau in 2008, seizures have increased. In fact, poachers like Shabbir Hasan Qureshi and Suraj Pal were caught in the last decade or so.â

James Compton, Asia Director, TRAFFIC, seems to share this point of view when he says, âIt is unsurprising that India continues to make the largest number of seizures compared to any other country. India is the worldâs largest wild Tiger stronghold with some 56 per cent of the estimated global wild tiger population. So unfortunately, this relative abundance means India becomes a target for poaching and trafficking. These seizure figures are also indicative of Indiaâs effort on law enforcement, which has led to interdictions of consistently high number of skins and bones over timeâ.

While India may boast the largest tiger population in the world, a significant number of which is found in the tiger reserves of India, that certainly does not justify the high number of seizures along with cases of poaching and trafficking. What is needed then, is a continued fight against poachers with the help of latest technology and sustained efforts by wildlife authorities and tiger conservationists by working in coordination.

Art Uniting Us All: Story of Man Spreading Wildlife Awareness One Painted Rock at A Time

On November 13, 2018, we started a campaign called âArtists For Conservat...